Foreign envoys in Kashmir to study situation on ground

A group of envoys including those from several Europe Union countries and a few Organisation of Islamic Countries (OIC) member states began a two-day visit to Jammu and Kashmir on Wednesday to take a first-hand account of the situation in newly-carved union territory, especially after the recently-concluded local body elections. IMAGE: Foreign envoys during their visit to the Hazratbal shrine, in Srinagar, on Wednesday. Photograph: PTI Photo

The envoys which has representation from four OIC -- Malaysia, Bangladesh, Senegal and Tajikistan -- were taken to Magam in central Kashmir amid heightened security arrangements in the city and elsewhere in the Valley, officials said in Srinagar.

This is the third delegation that has arrived in Jammu and Kashmir since the government abrogated the erstwhile state's special status on August 5, 2019 and bifurcated it into two union territories by carving out Ladakh.

In Magam, the envoys went to a college and were received in a traditional way and after the customary rituals by the administration, they interacted with the locals. 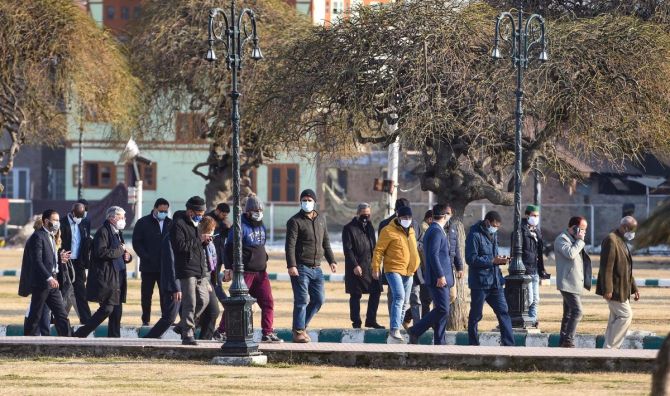 IMAGE: Envoys are on a visit to Jammu and Kashmir to assess the development work and the situation in the Union territory, especially after the successful completion of the District Development Council elections. Photograph: PTI Photo

It was a free-flowing exchange of ideas by the delegation with the locals, the officials said.

Chairperson of DDC Budgam Nazir Ahmad, who interacted with the envoys, told reporters that he raised the need for the government to provide basic amenities like food, clothing shelter, electricity and good roads.

"Budgam is a downtrodden district which needs development. Our discussion was centered around it," Ahmad added. IMAGE: A delegation of ambassadors from the European Union (EU) leave after meeting with locals at Magam area in Budgam, on Wednesday. Photograph: PTI Photo

The delegation was apprised of the government's initiative of ensuring democracy at grass-root level and strengthening of panchayats in the union territory of Jammu and Kashmir by giving them financial powers.

A significant thing about the delegation was the inclusion of OIC member states so that they could easily counter the propaganda of Pakistan which has been creating a false narrative about the situation in the union territory, the officials said. IMAGE: A delegation of 24 envoys of several countries -- including European Union, Latin America and Africa -- arrived on a two-day visit to Jammu and Kashmir for assessing the situation following the abrogation of Article 370 in August 2019. Photograph: Umar Ganie for Rediff.com

The report of the OIC Secretary General on its activities submitted to the 47th session of the Council of Foreign Ministers referred to the situation in Jammu and Kashmir and said, "The decision of the Indian government on 5 August 2019 towards changing the demographic and geographic composition of the territory, and the continuous blockade and restrictions together with human rights abuses, had awakened renewed efforts of the international community towards a resolution of the conflict."

However, India, without naming Pakistan, had said that it was 'regrettable that OIC continues to allow itself to be used by a certain country, which has an abominable record on religious tolerance, radicalism and persecution of minorities, to indulge in anti-India propaganda'. IMAGE: Envoys during their visit to the Hazratbal shrine. Photograph: Umar Ganie for Rediff.com

It may be mentioned here that curbs on Internet were removed earlier this month and the speed was enhanced from existing 2G to 4G.

During their stay in the Valley, the delegation members will visit the revered Hazratbal shrine on the banks of Dal Lake besides meeting artisans.

The delegation is scheduled to visit Jammu on Thursday where they are likely to meet the officials of the Union territory and call on Lt Governor Manoj Sinha. 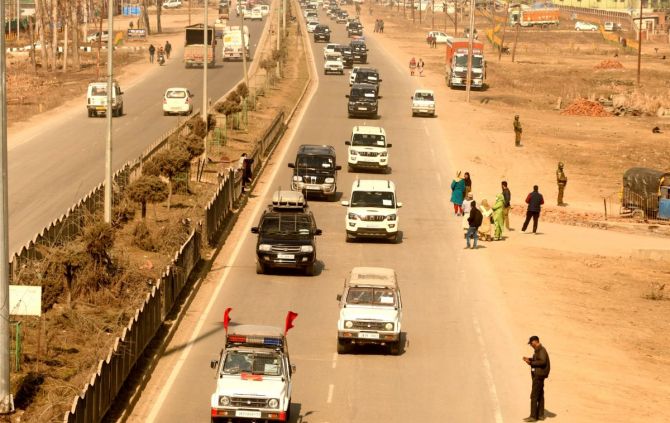 In a related development, parts of Srinagar observed a shutdown to mark the arrival of the envoys' delegation to Jammu and Kashmir. Shops in Lal Chowk and surrounding areas of the city remained shut as authorities deployed extra security personnel to ensure that the visit of the envoys passes off without any incident.

However, the traffic was normal on the roads. 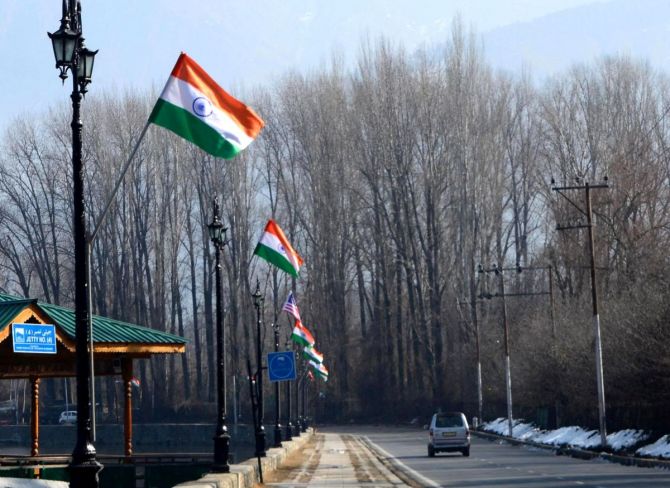 IMAGE: Flags of the United States and India placed on streetlights in Srinagar ahead of the visit of envoys. Photograph: Umar Ganie for Rediff.com

Senior Congress leader Saifuddin Soz said the visit by the envoys takes place almost every year and is a futile exercise as the government has no benefit from it.

Hurriyat Conference led by Mirwaiz Umar Farooq said the visit of the envoys was a curated tour for misleading the world. IMAGE: A view of the closed market during the envoys' visit. Photograph: Umar Ganie for Rediff.com

'A curated tour of foreign dignitaries to showcase 'normalcy' in the valley to the outside world is misleading. People's spontaneous strike, the only means of protest left to them, speaks volumes to the world of what people feel and want,' the amalgam said in a statement.

Immediately three months after the Centre withdrew special status of Jammu and Kashmir and bifurcated it into two union territories, a delegation of 23 EU MPs was taken on a two-day visit to assess the situation in the Union Territory by the International Institute for Non-Aligned Studies, a Delhi-based think tank.