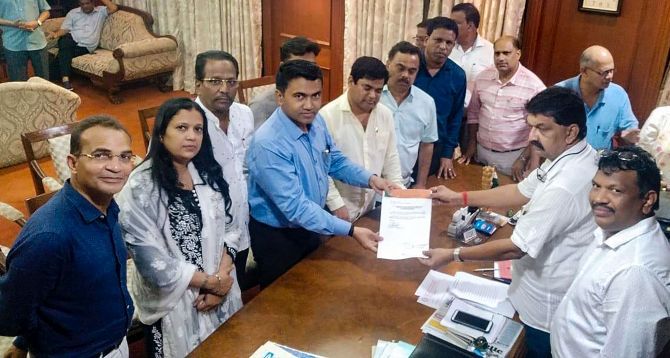 IMAGE: 10 of 15 Congress MLAs, led by Leader of Opposition Chandrakant Kavlekar, give letter for merger of their faction into BJP to Speaker Rajesh Patnekar in Panaji. Photograph: PTI Photo

From emerging as the single largest party with 17 seats in 2017 to being reduced to just five MLAs now, the Congress has suffered a big meltdown in Goa, a state where it was once a dominant political force.

The main opposition party suffered a jolt when 10 of its MLAs, led by Leader of Opposition Chandrakant Kavlekar, switched sides and joined the ruling Bharatiya Janata Party on Wednesday.

In 2017 state elections, the Congress won 17 of the 40 assembly seats in the politically volatile state, which has a history of legislators switching loyalties and bringing governments down.

Though the Congress emerged as the single largest party, it was outmanoeuvred by the BJP, with 13 MLAs then, which moved swiftly to form a government with the support of regional parties and independent MLAs.

The desertion began when Valpoi MLA Vishwajit Rane resigned from the Congress in March 2017 soon after getting elected.

He joined the BJP on April 7, 2017 and was sworn-in as a minister five days later in the Cabinet led by the then chief minister Manohar Parrikar.

The Congress's strength was reduced to 16, but it still remained ahead of the BJP, whose tally rose to 14 after Rane was reelected from Valpoi in a bypoll.

The Congress faced a second setback in October 2018 when its two more MLAs -- Subhash Shirodkar (Shiroda) and Dayanand Sopte (Mandrem) -- resigned and joined the BJP.

The strength of the Congress in the House was reduced to 14.

Meanwhile, the BJP, with the help of its allies, including the Goa Forward Party, the Maharashtrawadi Gomantak Party and Independents, remained in power.

However, the BJP saw a drop in its tally when Chief Minister Manohar Parrikar (MLA from Panaji) and another party legislator Francis DSouza died after prolonged illness.

The saffron party's strength was reduced to 12.

The by-elections for four assembly constituencies held in April-May 2019 saw the BJP winning three of them - Mandrem, Mapusa and Shiroda - while the Congress bagged the prestigious Panaji seat, represented by Parrikar for 25 years.

The Congress is now left with just five MLAs - four of them former chief ministers - just enough to hold on to the post of Leader of Opposition.

MLAs Pratapsingh Rane, Luzinho Faleiro, Ravi Naik, Digambar Kamat (all former CMs) and Aleixo Reginaldo Lourenco are left in the party, which is struggling to survive in the coastal state.