A BJP Yuva Morcha leader's killing by unidentified assailants led to tension at several places in Dakshina Kannada district in Karnataka on Wednesday, with instances of stone-pelting and police lathicharge being reported, while the party-led government assured strict punishment against individuals or organisations behind the killing. 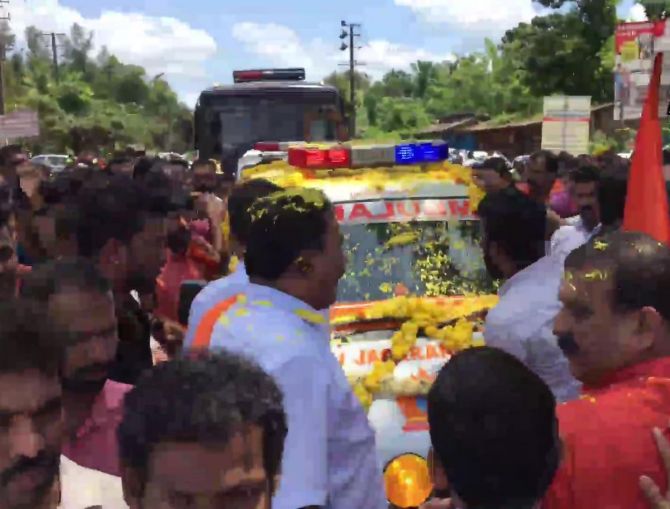 IMAGE: The body of BJP Yuva Morcha worker Praveen Nettaru, who was hacked to death by unidentified people, brought to his native village Bellare in Sullia taluk of Dakshina Kannada district. Photograph: ANI

While the police registered a case of murder, Chief Minister Basavaraj Bommai said the government would not hesitate to hand over the case to the National Investigation Agency (NIA), if required.

The Sangh Parivar had called for a bandh in Puttur, Kadaba and Sullia taluks in Mangaluru on Wednesday in protest against the murder and shops downed shutters.

Praveen Nettar, a Zilla BJP Yuva Morcha committee member, was hacked to death in front of his broiler shop in Bellare by three bike-borne miscreants on Tuesday night.

A resident of Nettaru in Bellare in Dakshina Kannada district, the 32 year-old man was hacked to death when he was heading home after closing his shop. "He tried to escape and ran but he fell down after a blow on his head," the police said.

Local residents immediately informed the police, which rushed to the spot and took Nettar to the hospital, where doctors declared him brought dead.

With BJP and Sangh Parivar supporters and workers turning their angst against the government, accusing it of not standing up to protect the lives of Hindu Karyakartas, Bommai assured them of arrest and the strictest punishment to the culprits soon and said, "Don't have any doubts about it."

The police have registered a case of murder at Bellare police station and have formed four teams to investigate different angles and to nab the murderers.

A few people are being questioned at the police station, a senior official said.

Following the murder, incidents of stone-pelting at government buses were reported from some places. A bus plying from Puttur to Mangaluru was damaged in the stone-pelting incident at Bolwar.

Meanwhile, the body of the deceased BJP worker was taken in a procession in an ambulance to Nettaru by activists of Sangh Parivar organisations.

The last rites of the youth leader were performed at his native place Nettaru.

His inconsolable wife Nuthana told a local TV channel that her husband was innocent, and that no innocents should meet with the "injustice" he faced.

"Despite me or his parents saying no, he used to work for people and society-day or night. I have lost him today, who will get him back. He did everything for society, but society could not save him.... I don't want a wife or family of another person who works for society to face my fate. Action should be taken in this regard," she said.

Before the last rites, hundreds of young activists belonging to various Hindu organisations gathered at Bellare shouting slogans "we want justice", and also expressed anger against the administration.

The police had to resort to lathi charge on unruly mobs following instances of stone pelting.

Angry youth even tried to topple a car, which reportedly belonged to Kateel. However, following  the intervention of senior leaders, they fled after puncturing the tyres of a car.

Security has been beefed up across the communally sensitive district following the murder.

The incident has threatened to take a communal turn with suspicions being raised by right wing outfits that the murder is in retaliation to the killing of a youth belonging to the minority community in the same locality recently.

Speaking to reporters earlier in the day, Bommai said since the incident took place close to the Kerala border, Karnataka police is in contact with its counterpart there.

"Superintendent of police, Mangaluru, is in touch with his counterpart in Kasaragod, and DG of the state has spoken to DG Kerala... We will nab them soon, we have taken this seriously," he said, as he appealed for peace and requested that no one should make inflammatory statements.

At the outset it appears to be "pre-planned" and there are similarities with other cases, which are being studied in entirety, the CM said, adding, "We will go to the roots."

The incident comes months after a 28-year-old Bajrang Dal activist was murdered in Shivamogga by a gang.

Home Minister Arga Jnanendra said he has spoken to Chief Minister Bommai about the incident and has issued necessary instructions to the police.

An ADGP rank official will be going to Mangaluru and will monitor the probe and take necessary action. Along with nabbing the culprits, efforts are also on to maintain peace and order, he said.

"It is natural that there will be anger about losing a young man, but I request people to maintain peace."

The chief minister's political secretary and MLA M P Renukacharya has threatened to resign if strict action is not taken against the killers, stating that the lives of Hindu karyakartas was more important for him than any official position. He represents Honnali in Davangere district.

There were also reports of the BJP Yuva Morcha's mandal presidents and workers resigning from their posts in some places like Chikkamagaluru among others.

Condemning the killing, Leader of Opposition in Karnataka and former chief minister Siddaramaiah on Wednesday asked the police to take action against the perpetrators without any "biases".

Janata Dal-Secular leader and former CM, H D Kumaraswamy, asked when this string of killings would end, and questioned the BJP government's alleged inaction after the similar killing of Bajrang Dal activist Harsha in Shivamogga in February.

"...Why the BJP government is making no attempt to see to it that such killings don't happen, instead of showing activeness after instances of murder," he said in a tweet, while noting that such bloodshed happens when elections approach.