The teenager, Nikolas Cruz, accused of using a semi-automatic rifle to kill 17 people at a Florida high school did not appear to be a peaceful man on social media. He made quite clear his desire to perpetrate the exact type of violence of which he now stands accused.

Charged with 17 counts of premeditated murder, here’s what we know about him so far. The 19-year-old teenager, who allegedly committed one of the worst mass shootings in US history at a Parkland, Florida, high school on Wednesday, is part of a with a white nationalist group.

The leader of a white nationalist militia called the Republic of Florida said Cruz was a member of his group and participated in exercises in Tallahassee.

Jordan Jereb was quoted telling the Associated Press that he did not know Cruz personally and that “he acted on his own behalf” and is “solely responsible for what he just did”.

The group wants Florida to become its own white ethno-state. Jereb said his organisation holds “spontaneous random demonstrations” and tries not to participate in the modern world.

He also said Cruz had “trouble with a girl” and that he believed the timing of the attack, on Valentine’s Day, was not a coincidence. 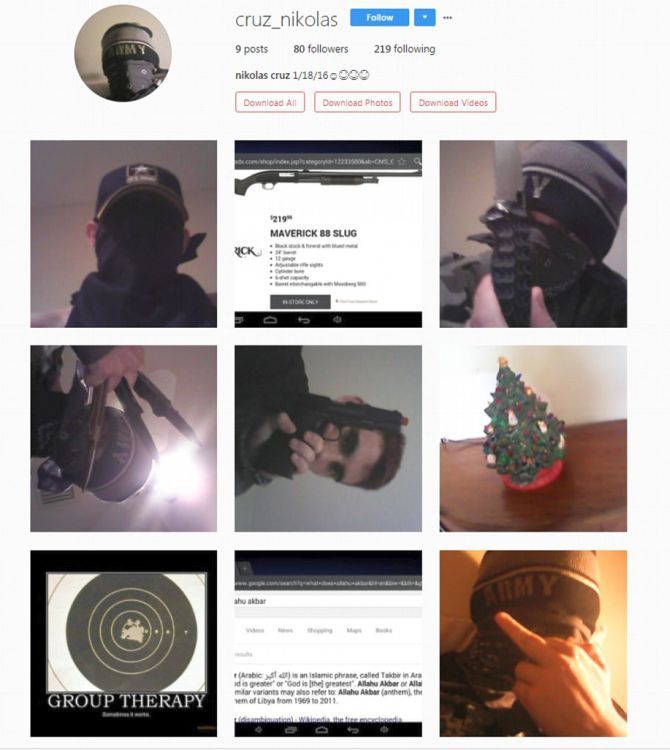 IMAGE: Cruz's Instagrm page was littered with pictures of knives and gun. He was reported twice to the authorities for his disturbing social media posts where he also said that he wanted to kill law enforcement one day.

The 19-year-old’s social media is said to be littered with pictures of knives and guns.

A number of images purportedly posted on his Instagram -- now suspended -- show a man holding a variety of weapons.

The face was often hidden by a hat or balaclava.

Cruz’s disturbing behaviour also included several threatening comments under videos on YouTube and other sites. They include:

“I am going to kill law enforcement one day they go after the good people.”

In September, a YouTube user going by Nikolas Cruz posted a comment to a vlogger’s YouTube page, saying, “Im going to be a professional school shooter.”

3) How did he plan the attack? 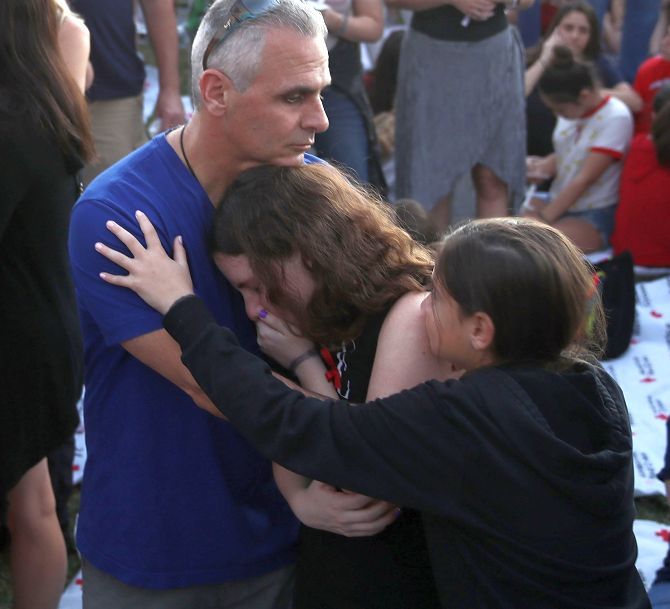 Cruz, who was expelled from Marjory Stoneman Douglas High School for disciplinary reasons, had bought the semi-automatic rifle he used in the massacre legally.

Cruz said that he shot students in the hallways and on the grounds of the school.

Cruz said he brought more loaded magazines to the school and kept them in the backpack until he got on campus. IMAGE: The American flag above the White House is lowered to half staff following the shooting on Wednesday at Marjory Stoneman Douglas High School. Photograph:  Win McNamee/Getty Images

The gunman fired into five classrooms -- four on the first floor of the school and one on the second floor, Sheriff Scott Israel said.

The shooting lasted for three minutes. When he was done firing, he went to the third floor and dropped his AR-15 rifle and the backpack containing the ammunition. He then ran out of the building and attempted to blend in with fleeing students.

After the rampage, the suspect headed to a Wal-Mart and bought a drink at a Subway restaurant before walking to a McDonald’s. He was taken into custody about 40 minutes after leaving the McDonald’s, the sheriff said.

Obama tweeted: “We are grieving with Parkland. But we are not powerless. Caring for our kids is our first job.

“And until we can honestly say that were doing enough to keep them safe from harm, including long overdue, common-sense gun safety laws that most Americans want, then we have to change.”