The last time he left his country was a month after the coronavirus appeared in a market in the Chinese town of Wuhan in December 2019.

Xi Jinping -- general secretary of the Chinese Communist party and president of the People's Republic of China -- was in Naypyidaw, Myanmar, on a State visit, January 17-18, 2020.

Twenty seven months and 12 days later, Xi -- who hopes to be proclaimed China's leader for life at the 20th Chinese Communist party congress -- left the mainland on Thursday, June 30, 2022.

The occasion? To mark the 25th anniversary since the former British colony returned to Beijing's rule.

Once a lonely bastion of democracy in the Chinese Communist party kingdom, Hong Kong in the last couple of years has been compelled to bow to Xi's will with anyone advocating resistance to Beijing's tyrannical ways being arrested and sentenced to prison terms. IMAGE: Xi arrives in Hong Kong after a high-speed rail journey across the border, June 30, 2022. Photograph: Selim Chtayti/Pool via Reuters 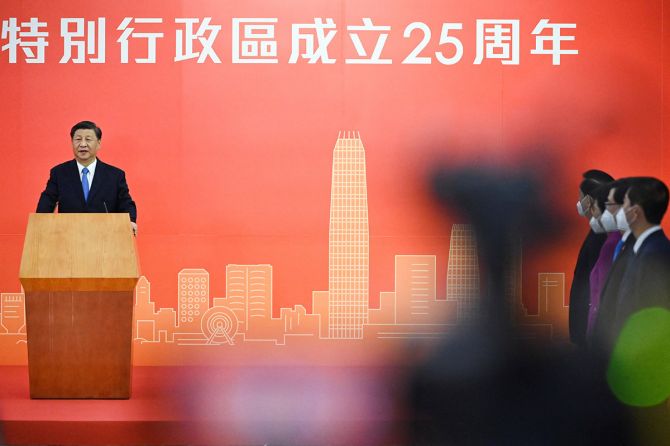 IMAGE: Meanwhile in Beijing, a staff member stands near an image of Xi ahead of the 101st founding anniversary of the Chinese Communist party at the National Museum, June 30, 2022. Photograph: Tingshu Wang/Reuters IMAGE: A screen showing Xi's speech about Hong Kong, ahead of the 25th anniversary of the former British's colony handover to China, at the National Museum in Beijing. Photograph: Tingshu Wang/Reuters