Former Samajwadi Party MP and actor Jaya Prada joined the Bharatiya Janata Party on Tuesday and was fielded as the party's candidate from Rampur constituency to take on her bitter rival and SP nominee Azam Khan. 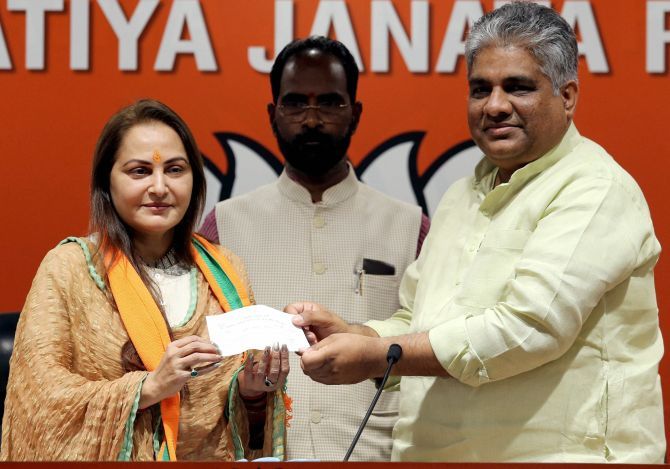 A two-term Lok Sabha member from the SP, she is a close associate of Rajya Sabha member Amar Singh, who was expelled from the regional party and has since come close to Hindutva fountainhead Rashtriya Swayamsevak Sangh.

Lauding Prime Minister Narendra Modi, she described him as a "brave" leader in whose hands the country is "safe".

Noting that she started her political journey with the Telugu Desam Party and was its Rajya Sabha MP before joining the SP and being elected to Lok Sabha from Rampur, 56-year-old Jaya Prada told reporters that joining the BJP is a "significant" moment in her life and she would now work dedicatedly for the saffron party.

WATCH: 'Prime Minister Narendra Modi a brave leader in whose hands the country is safe'

Welcoming her into the BJP, its general secretary Bhupendra Yadav said she needed no introduction and added she was impressed with the Modi government.

Of all the 80 seats in Uttar Pradesh, Rampur has the highest concentration of Muslims, and the BJP has often banked on division of their votes and consolidation of Hindus in its favour to win what is seen as a difficult seat for the saffron party.

Muslims constitutes over 50 per cent of the total voters in the seat.

Riding the Modi wave, BJP's Nepal Singh had won from there in 2014. Due to health reasons he was not in contention for the ticket in this election.

With Jaya Prada joining the BJP, the party's "star power" will also be boosted as it already has the likes of Hema Malini and Paresh Rawal in its ranks.