The police cannot act like a lynch mob under any circumstance, said several human rights activists after four people accused in the rape and murder of a woman veterinarian were killed near Hyderabad in the early hours of Friday. 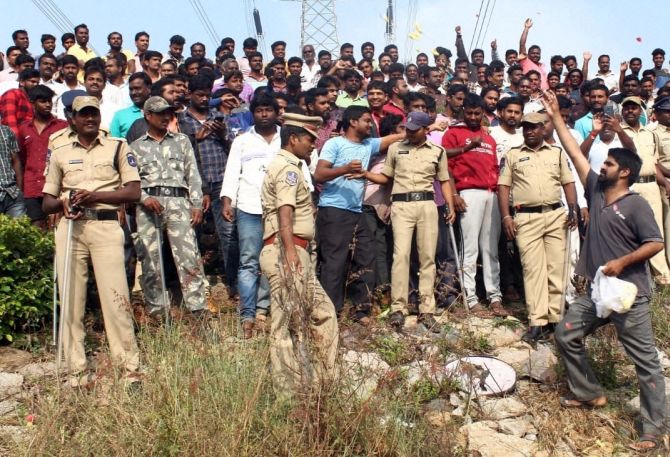 IMAGE: People shower flower petals and raise slogans in favour of police at the encounter site, where the four accused in the rape-and-murder case of a 25-year-old woman veterinarian were shot dead by police. Photograph: PTI Photo

The encounter is an attempt by authorities to distract people from the government's failures to safeguard women's rights, the activists said.

According to Kavita Krishnan, secretary of the All India Progressive Women's Association, this is not justice but a "ploy" to shut down demands for accountability from the police, judiciary, governments, and justice and dignity for women.

"Instead of being accountable to his job and answering our questions about his government's failures to safeguard women's rights, the Telangana CM and his police have acted as leaders of a lynch mob," she said.

She described the incident as the admittance of utter incompetence and failure of criminality on the part of the entire political and police system and accused Telangana Chief Minister K Chandrashekar Rao of deflecting the "whole issue".

"We are asking tough questions to the police and to the government. In order to avoid answering these questions it is an attempt to say justice has been done," she said.

The incident took place around 6.30 am when the four accused in the rape-and-murder case of the 25-year-old woman veterinarian near Hyderabad were taken to the site of the offence for reconstruction of the scene of the crime as part of the investigation, a senior police official said.

Krishnan said the police personnel responsible must be arrested and prosecuted, and must be asked to prove in court that all four men were killed.

Annie Raja, general secretary of the National Federation of Indian Woman, called for a high-level inquiry.

"Why in spite of having all legislations in place in the country are governments failing to implement it. Definitely it was a distraction. It was an attempt to divert attention from the issue. A high level inquiry is needed in the matter is needed," she said.

Asking people to say "no to trigger track injustice", she said, “So all that the state will do in the name of ensuring that women live as equal and free citizens is to add to its arsenal of unlimited, arbitrary violence."

She also asked for an independent judicial inquiry into the incident.

Human rights activist Shabnam Hashmi, founding member of Act Now for Harmony and Democracy, agreed that it might be an attempt by the government to distract people.

"They (Bharatiya Janata Party) believe in this kind of politics and they are adding to the violence to public discourse and forcing people to a situation where chaos prevails in society... because when people start asking for lynching on the streets and killing people with stones or killing them in fake encounters, it is a very serious situation in society and it has to be strongly condemned," she said.

“Everyday they want to create a situation where you forget what is happening and it is not only protest around rape but also all other protest like Kashmir, NRC, Ayodhya judgment, so that people don't ask about failure on economic front," she said.

The gangrape-and-murder triggered nationwide outrage with the public and lawmakers demanding speedy punishment to the perpetrators. The state government had ordered setting up of a special court (fast track) to expedite the trial.