'If the government does not take any action soon, 21 cities of India will become like Cape Town, with no water.'
'Four cities -- Delhi, Gurgaon, Meerut and Faridabad -- will suffer the worst.' 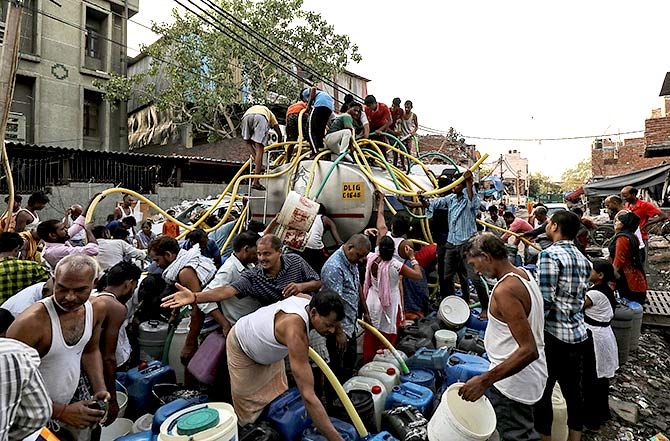 IMAGE: Residents line up to fill containers with drinking water from a municipal tanker in New Delhi. Photograph: Anushree Fadnavis/Reuters

India is facing a water emergency of unprecedented proportions.

Cities are facing an acute shortage of water and in smaller towns tankers are lining up to provide water.

The situation is much worse in the villages, where more and more people migrate to the cities in search of water.

"In Nagpur, today, we have Veolia India, a French company, that is providing water... Veolia India now wants to supply water in 18 cities of India. Soon, they will capture the country's water," Magsaysay Award winner Rajendra Singh, below, tells Rediff.com's Syed Firdaus Ashraf.

Why is there no permanent solution for a serious issue like water scarcity? Where did we go wrong?

Take any political party's manifesto and you will find that they don't talk about water.

The tears in their eyes have dried up and the only time they speak about water is when they want to privatise water.

One party in its manifesto says it will provide tap water to every citizens's home.

But how it is possible?

There is no water left.

In this crisis, how can you make such promises of jal-nal (water in taps)?

This jal-nal is only for private companies.

What did earlier governments do to solve the water problem?

When water was priority, past governments built large dams.

Take Maharashtra, where there are 42 large dams. The vision of the state's leaders was to grow sugarcane and make money.

Agriculture was industrialised in Maharashtra.

Today, in Maharashtra, to do sugarcane farming 84 per cent of the water is being taken out from the ground.

Is there anything more dangerous than this?

Politicians of our country don't have any vision for water.

The only vision they have is how to get votes in the name of water.

The politicians only think of solving the water issue through private contractors.

These private contractors can never find a solution to the water problem.

It is only a community that can solve the water problem.

But when people don't get involved as a community to solve a problem, then it will never be solved. 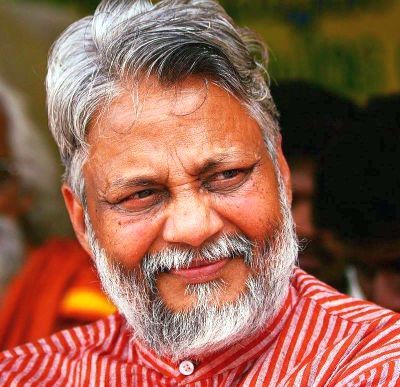 This is a classic example.

The first two years of the Jalyukt Shivar was an ideal model programme.

There was scientific thought that was put into it.

Villagers across Maharashtra had put in Rs 350 crore from their own pockets to solve the water problem.

However, later on, when the government started giving Jalyukt Shivar work to private contractors, the people, instead of giving money, stopped doing work.

They understood that the contractors are going to siphon off the money in the name of water.

Why did the Maharashtra government rope in private contractors?

Because they wanted contractors to make money and return it in election time.

I don't know who got this idea, whether it was Chief Minister Devendra Fadnavis or his ministers.

But the buck stops at Fadnavis's table.

Why didn't you protest when contractors were involved in the Jalyukt Shivar programme?

I informed Fadnavis about it, but he didn't do anything.

My job is not to fight, but to do work peacefully.

Till the time Fadnavis listened to me, I worked for him.

But the day he stopped, I sat at home.

Even today I work in Sangli district in Maharashtra where we have ensured rivers like the Agrani and Mahakali provide water in spite of four years of drought.

How serious is the water crisis in India?

Very soon, 21 cities in India will have Day Zero water (when the taps run dry and people will have to queue up for water).

If the government does not take any action soon, 21 cities of India will become like Cape Town, with no water.

There will be zero water in their reserves. 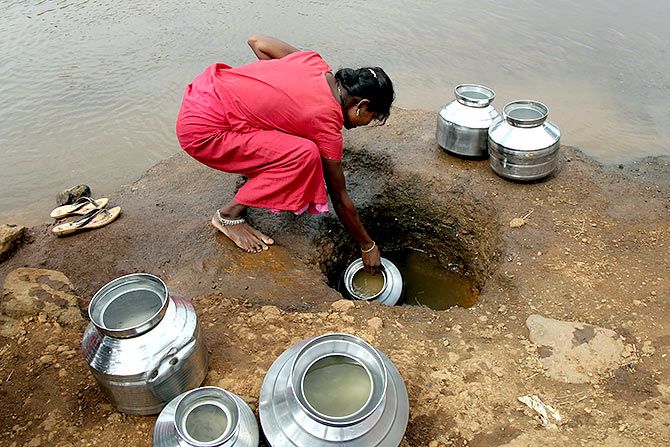 IMAGE: A woman fetches water from an opening made to filter water next to a polluted lake in Maharashtra's Thane district. Photograph: Prashant Waydande/Reuters

How is the situation in the villages?

People are leaving the villages to come to cities.

India's future is turning into a dangerous landscape.

When the population leaves the villages and comes to cities, then the urban future is very dangerous.

These things are not mentioned in any of the political parties's manifestos.

What can the government do if there is less rainfall?

Less rainfall is not natural, but it is a man-made (crisis).

Scarcity of water is a man-made disaster in India.

They have killed trees on the mountains.

There is no greenery on the ground.

When this happens, then those areas will get clouds, but it will not rain as there will be less air pressure.

Whenever man tinkers with nature, then nature takes out its anger on mankind.

Heavy rainfall in one region, drought in another -- how can India tackle such a situation?

When it rains on the mountains it has to be stopped there and the water needs to be put into underground aquifers so there won't be soil erosion.

That soil will not silt and accumulate into the river.

At present, in India, there are simultaneous floods and droughts because we do not control the flow of rainwater.

When water flows with great speed, there is erosion of soil.

The place where there is no soil is hit by drought, like in Marathwada.

In places where there is soil, it erodes and accumulates into the rivers. So the rivers start overflowing, resulting in floods.

If we want to stop floods and drought in India, we have to control the flow of rain water.

To make India flood-free, we have to slow the water flow.

When it starts crawling, put that water in the belly of the Earth.

During then prime minister Atal Bihari Vajpayee's term in office, there was a discussion on inter-linking of rivers to solve the water crisis. Will it work?

In India, as per the Constitution, water rights are on three levels.

First, water right is of the river flow, which is decided by the Government of India.

Second is the rainfall water, which rights are with the state government.

And the third, is in which panchayats and municipal corporations have the rights on the rainfall water in their jurisdiction.

These three levels will always be different.

Today no chief minister of any state will say he has surplus water.

So how can any government say that river linking will be done and everyone will be given water?

Is it true that we are using six times more water than what we used 100 years ago?

Our lifestyle has changed.

100 years ago, when humans used to go to the toilet or bathroom, they never used to waste 15 litres of water.

Now when we go to the toilet and flush, we waste 6 litres of water on every flush.

So the water use pattern has been spoilt in the last 100 years.

Earlier, humans were disciplined in using water, but that is not the case now.

India was a guru of the world in water discipline.

Whenever some guests come home we give them water, not wine as in Europe.

We respect water as it is in our culture.

We have always considered it to be God.

Unfortunately, since the time we put our Gods in concrete cement homes with gates closed, the misuse of water started.

This misuse of water is dangerous. 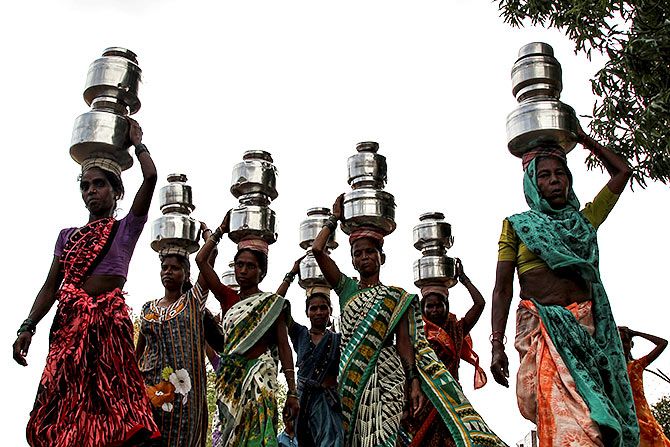 It is said the demand for water in India is expected to reach its peak in 2030. Is it true?

Yes, the demand for water is increasing.

The demand will increase more and more as time goes by.

To get that kind of water we need to have 6 Rs in life -- Respect, Reduce, Retreat, Recycle, Reuse and Rejuvenate nature by water.

This indigenous Indian wisdom has a deep understanding of water.

We used to follow a rule that as much water as we consume in life, we will return it back to nature before we die.

How much water must a family of four in a city consume?

If we start making English toilets on a mass scale, then we will not be able to do with 40 litres daily which is the maximum need for a man.

But if we put into practice the 6 Rs philosophy in life, then 40 litres of water is enough for one man.

For a family of four 160 litres is more than enough.

To use less water, we have to change our lifestyle.

Unfortunately, today our society demands water from the government.

But at the same time society has forgotten to make its own arrangements for water.

In the earlier days, no king used to provide water to his subjects.

King, mahajans (learned people) and the public all used to get involved and ensure that the there is is sufficient water in society.

Using less water is a socialist thought, while consumption is a reality of capitalism.

In India, the trustee system was in place.

The East India Company got capitalism in India through trade.

In Nagpur, today, we have Veolia India, a French company, that is providing water. It is a private company.

When I spoke to local leaders in Nagpur, they say Veolia India is only giving services for water to consumers.

So when politicians change their tune, it is not good.

Veolia India now wants to supply water in 18 cities of India. Soon, they will capture the country's water.

I want to fight against this privatisation of water.

But when it rains, people forget about drought.

I don't forget, only politicians forget.

In the future, power games will be on water.

You just watch, multinational companies will play a big role in it.