The seventh Tibet Work Forum was held in Beijing on August 28 and 29.
Delhi should be deeply concerned at a time India faces a precarious situation in Ladakh, because the TWF defines China's western border policies, observes Claude Arpi. IMAGE: Chinese President Xi Jinping arrives for the closing session of the National People's Congress at the Great Hall of the People in Beijing, May 28, 2020. Photograph: Carlos Garcia Rawlins/Reuters

An important event took place on August 28 and 29.

The seventh Tibet Work Forum (TWF) was held in Beijing.

While the previous one (the sixth), organised on August 24 and 25, 2015, completely escaped the Indian (and the world) media, this one got immediate coverage; indeed, it is a crucial event not only as far it concerns the fate of the Roof of the World, but also for the presently-tense Indian frontiers.

What exactly is a Work Forum on Tibet?

A Tibet Work Forum usually decides the fate of Tibet for the next five to 10 years.

Delhi should be deeply concerned at a time India faces a precarious situation in Ladakh, because the TWF also defines China's western border policies.

A Work Forum (or Conference) is attended by 200 to 300 officials, including the entire politburo (with the standing committee standing on the dais), the People's Liberation Army (including the all-powerful members of the Central Military Commission), party secretaries of at least five provinces, representatives from different ministries, as well as local satraps posted in Tibet.

The seventh TWF has been given large publicity; the TV report lasted more than 14 minutes, mostly quoting the 'People's Leader' Xi Jinping and showing the large 'masked' attendance (including the chief of the PLA Navy!); a detailed report (in Communist jargon) was immediately issued.

The sixth TWF, presided over by Xi, pleaded for more efforts to promote economic growth and bring about an inclusive social progress for Tibet and the Tibetan-inhabited areas; in 2015, Xi vowed to implement sustainable measures and continue preferential policies for the mountainous region which "has entered a critical stage toward fulfilling the country's [China] goal of building a moderately prosperous society in a comprehensive way."

Note that the Tibetan Autonomous Region (TAR) and Tibetan-inhabited areas of four provinces (Sichuan, Gansu, Qinghai and Yunnan) were clubbed together as far as Beijing's policies for Tibet were concerned. IMAGE: Tibetan Buddhist monks look at a giant Thangka displayed at the Tashilhunpo monastery in Shigatse, Tibetan Autonomous Region, China, July 17, 2019. Photograph: He Penglei/CNS/Reuters
The timing of the Forum

The TWF comes two months before the fifth plenum of the Communist party of China, which will have to take difficult decisions for the Middle Kingdom's shaky economy and also at a time Beijing is celebrating the 55th anniversary of the creation of the Tibetan Autonomous Region (TAR), which has never really been autonomous; additionally, a tense situation prevails on the border with India.

The fifth TWF resulted in poverty alleviation schemes and the construction of hundreds of 'moderately-well-off' villages ('ghettos', say the Tibetans), particularly close to the border with India.

There is no doubt that it is easier to control the masses when they are sedentary and settled in well-connected villages (via WiFi); when the whereabouts and actions of the villagers can be controlled through their mobile phones.

In 2015, Xi mentioned his well-known theory about the 'border areas': 'Governing border areas is the key for governing a country, and stabilising Tibet'; since the month of May, we understand better why China wants to stabilise and control its borders with India.

Xi's language was not very different this time. 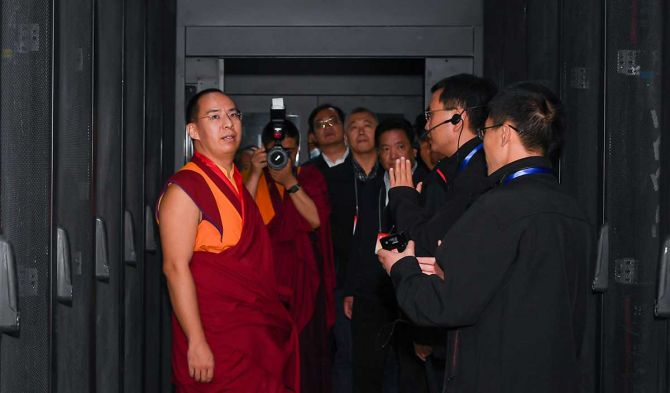 IMAGE: Gyaltsen Norbu, the 11th Panchen Lama, appointed by the Chinese government. Photograph: cnsphoto/Reuters
No Monks, Not many Tibetans

But looking at the TV report, one is struck by a few images.

First, no monk attended the Forum.

For a society which has traditionally been based on the 'Harmonious Blend of Religion and Politics', it is strange to say the least.

Even Gyaltsen Norbu, the Chinese selected Panchen Lama, a favourite of the Chinese media, was nowhere to be seen.

He is probably too young (and unsafe) for the Communist hierarchy.

His predecessor, the tenth Panchen Lama, first a stooge of the Communists, had revolted and became one of the most ardent Tibetan patriots when he was released from jail in early 1980.

It is not only the lamas who were missing in action, but as far one can recognise the masked faces (only members of the Standing Committee of the Politburo were exempted from wearing masks), hardly any Tibetans were present; although all the speeches (and the TWF itself) were around the welfare of the 'masses of all ethnic groups' in Tibet.

'All ethnic groups in Tibet' is a way to mention the large migration of Hans on the plateau.

In his speech, Xi Jinping emphasised The Ten Musts to 'fully implement the party's strategy of governing Tibet in the new era'; he went through ten areas or 'musts'.

The objective, he observed, was to build a new socialist modern Tibet that is 'united, prosperous, civilised, harmonious and beautiful.'

Xi elaborated on 'forging a sense of the community of the Chinese nation, improving the quality of development, ensuring and improving people's livelihood, promoting the construction of ecological civilisation, strengthening the party's organisation and regime building, ensuring national security and long-term stability, ensuring the continuous improvement of people's living standards, ensuring a good ecological environment, and ensuring the consolidation of border defence and security, and finally striving to build a new socialist modern Tibet.'

That is the Ten-Point Programme.

The Communist party's general secretary pointed out: 'Practice has fully proved that the Party Central Committee's policies on Tibet work are completely correct, and that Tibet's sustained, stable and rapid development is an important contribution to the overall work of the party and the country.'

He congratulated the comrades struggling on the 'snowy plateau', especially the cadres who serve on the frontline (read, the border with India). 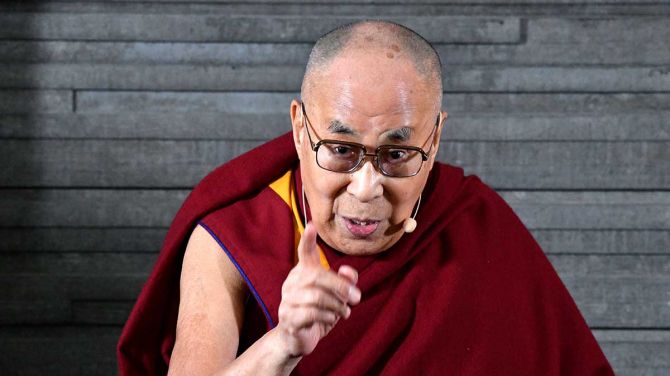 The new great helmsman further explained: 'To do a good job in Tibet, we must adhere to the leadership of the Communist Party of China, the socialist system with Chinese characteristics, and the system of regional ethnic autonomy.'

Although Xi loves to speak about regional autonomy, it is clear that the Tibetans do not have much say in the matter.

Why, for example, 70 years after the so-called 'liberation' of Tibet, hasn't any ethnic Tibetan been made party secretary in Tibet?

No Tibetan has ever made it to the politburo?

The reason is that the Han still do not trust the Tibetans.

One can only wonder where does the Dalai Lama's Middle Path fit in all this?

Xi continued his long speech (qualified as 'important' by the Chinese propaganda): 'We must adhere to the strategic thinking that governing the country must govern the borders and stabilise Tibet before governing. It is necessary to maintain the unity of the motherland and strengthen national unity as Tibet's work.'

He went on in the same vein, speaking of 'enriching the people and rejuvenating Tibet, uniting people's hearts, and consolidating the foundation.'

It is clear that the hearts of the Tibetans have not so far been 'unified with the motherland'; this will be probably what Xi and his colleagues try to achieve during the coming years, by building more infrastructure, bringing more tourists and assimilating in different ways the recalcitrant Tibetans into the Chinese nation (by integrating them into the PLA, for example).

A copper wall and iron wall

Xi Jinping pointed out that it was necessary to 'extensively mobilise the masses to participate in the struggle against separatism, and form a copper wall and iron wall for maintaining stability.'

In other words, indoctrination of the Tibetan masses and the fight against the Dalai Lama and his followers, are the need of the day for Beijing.

Buddhism has an important place in the scheme, but the Communist party strives to 'actively guide Tibetan Buddhism to adapt to the socialist society and promote the Sinicisation of Tibetan Buddhism.'

One could call it 'Buddhism with Marxist characteristics'.

Worrying for India is the large-scale development of infrastructure on the plateau; Xi spoke of promoting 'the construction of a number of major infrastructure and public service facilities around the Sichuan-Tibet railway construction and other projects, and build more solidarity lines and happiness roads.'

Other projects could be a railway line from Tibet to Xinjiang across Aksai Chin and a new route between Tibet and Xinjiang (the G216 highway).

Xi added: 'It is necessary to strengthen the construction of border areas and adopt special support policies to help border residents improve their production and living conditions and solve their worries.'

One wishes India would make the same resolution and help its own border populations.

Like five years ago, Xi mentioned the 'Old Tibet Spirit', referring to the first Communist cadres who went to Tibet in the early 1950s: 'They (present cadres) should not lack the spirit, even if they lack oxygen, they should not be afraid of hardship, or the higher altitude.'

'They should continue to enhance their sense of responsibility and mission' and he added: 'It is necessary to care for Tibetan cadres and workers, improve and implement various supporting policies such as wage income, housing, medical treatment, children's schooling, and retirement placement, so as to solve their worries.';

The Tibetans still are at the centre of the scheme, though they are hardly asked about their aspirations or their opinion.

In any case, all this does bode not well for the Tibetans in India (who will soon face a general election for a new 'president') and for the Indian border areas, whether in Ladakh or elsewhere on the northern frontier, which need more attention from the Indian government. 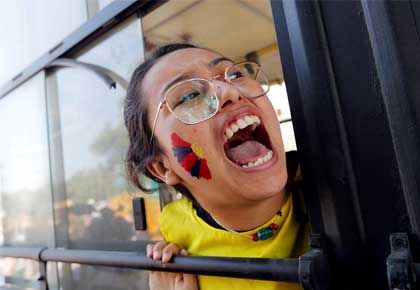