'Their brave resistance keep our hopes alive that this youth upsurge is strengthening India's democracy and pluralism,' states Mohammad Sajjad. 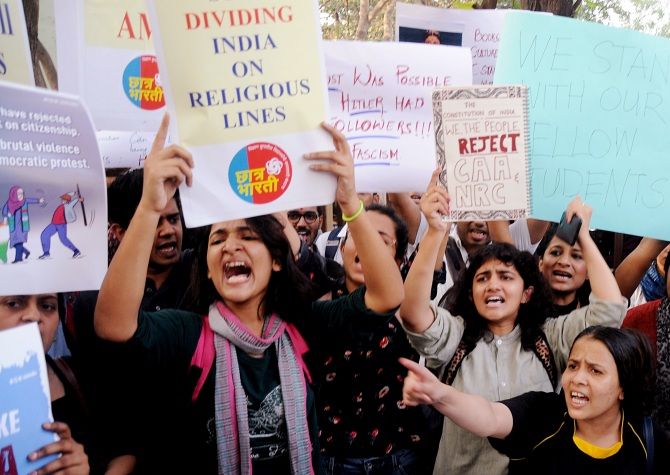 Because universities offer antidotes to the opium of religious fanaticism that it administers to the masses.

The present BJP regime, having failed miserably on the economy, is trying to mislead the people.

They are trying to show the country-wide youth upsurge as a 'Muslim-only' agitation.

They don't seem to succeeding in their designs, evident by the fact that campus after campus are joining the protests.

The incumbent regime has revealed that the only thing it knows is to create communal polarisation and win elections.

It does not know how to govern, how to manage the economy.

By this time, this particular weakness has become well known to the common people.

The sudden shock of cruel demonetisation failed to achieve its stated objectives.

The NPR-NRC too will possibly meet the same sorry fate.

Since, the upsurge against the CAA-NPR-NRC erupted first in the north east, it had to be deflected.

With this diversionary intent, on December 15, Delhi's Jamia Millia Islamia university was targeted.

In both universities, the police used stun grenades, which had expired in 2014-2015.

Before this, did the police ever use stun grenades against student protests? No!

The pattern of unprovoked police brutalities against the students were similar in both universities.

This clearly suggests that both the Aligarh police and Delhi police received similar pre-planned commands to repress the students agitating against the blatantly discriminatory citizenship laws.

This inevitably gave rise to a country-wide student upsurge. 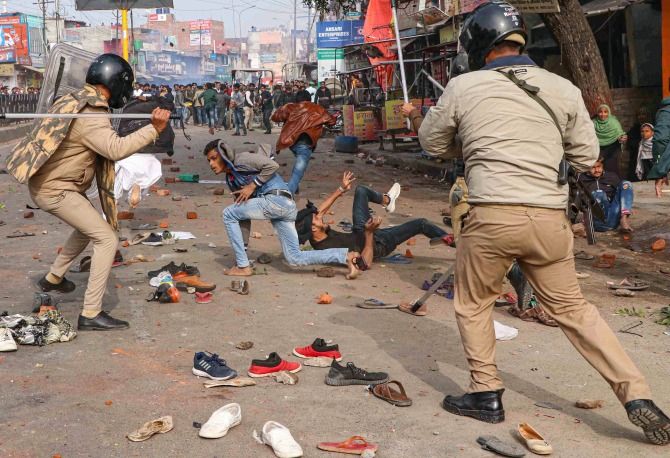 The protests across Uttar Pradesh further exposed the police.

The chief minister, having made it known that his regime would resort to violent retributive repression, provided further credence to the police excesses against Muslims.

Audio and video recordings of the chief minister's instructions to the Bijnore SSP, and brazen Islamophobic outpourings of another policeman, reveal much about the anti-Muslim repression that has been unleashed in UP.

Apologists of the regime unsuccessfully try to justify the killings across UP by concocting lies that at some specific place someone shouted treasonable slogan of 'Pakistan Zindabad'.

Only for argument's sake, if there is proof to that effect, then the police must take specific action against the offender, according to the law.

It certainly cannot justify repression across the province.

There have been many mass protests in the past prior to the recent protests.

No collective fine was imposed upon those agitators.

This time, Muslim victims have been made to pay such fines.

The police acted in such a reckless manner that even people long dead have been served with notices of confiscation of properties. 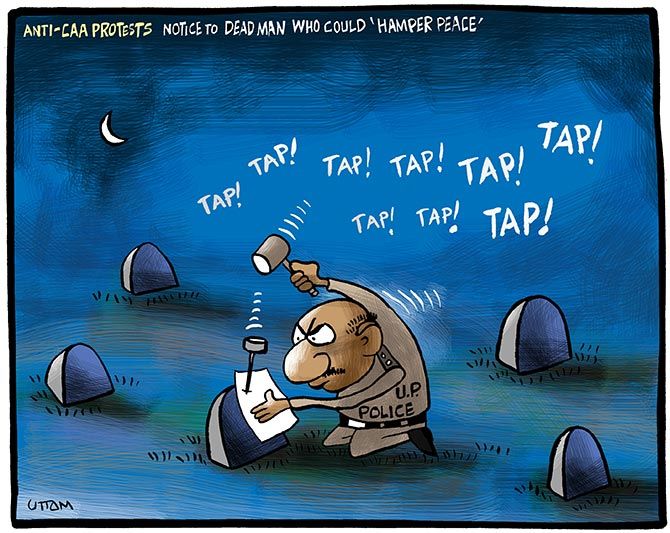 Yet, it appears that the wide and deep communal polarisation the regime anticipated to create does not appear to have happened.

Thanks to the students agitations, and circulation of information on social media, gradually more and more disadvantaged classes of Indians are finding out about the agonies they will undergo in order to produce documents for the NPR 2020.

For example, compared to NPR 2010, NPR 2020 has added few more columns in which they ask for date of birth of the parents of citizens.

A huge chunk of the Indian population do not have certificates of date of birth, particularly of their mothers.

Those who have is the one issued by the school boards.

The government has not made it clear that it will accept this document as proof.

A huge chunk and a larger number of women are not educated to even have matriculation certificates.

The Union home minister, having said that no existing documents (not even Aadhar), will be acceptable, has added to the people's woes.

Shockingly, the government is not advertising what documents it will ask for in NPR 2020, which, according to the law, is the first step towards the NRC. Let us make no mistake! 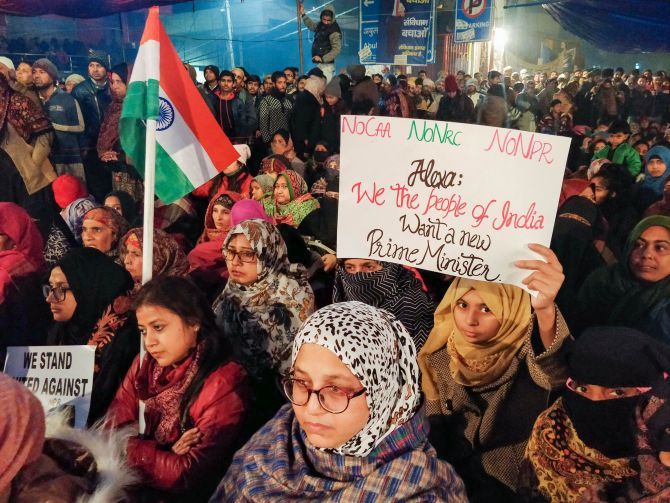 The more the Union ministers (home, defence, law, etc) have tried to explain and convince, the more they have revealed the problems accompanying the NPR-NRC.

These contradictions among the Union ministers have further eroded the justification for police excesses.

And precisely because of this, the protests against the NPR-NRC have gained increasing legitimacy.

Even semi-literate and illiterate women of 90 years of old age are able to articulate the deep flaws in the law and the agonies involved in it, with utmost clarity, assertion and confidence.

They have overcome their fear of the regime.

They have helped others overcome their fear.

As the police and the BJP-led government, both, have not been able to put forward convincing justification and explanation for such excessive brutalities, they employed a different method at JNU on January 5.

Dozens of masked goons, allegedly from the ABVP, entered the campus, made murderous assaults on the teachers and students, and went away.

The police remained a complicit onlooker. 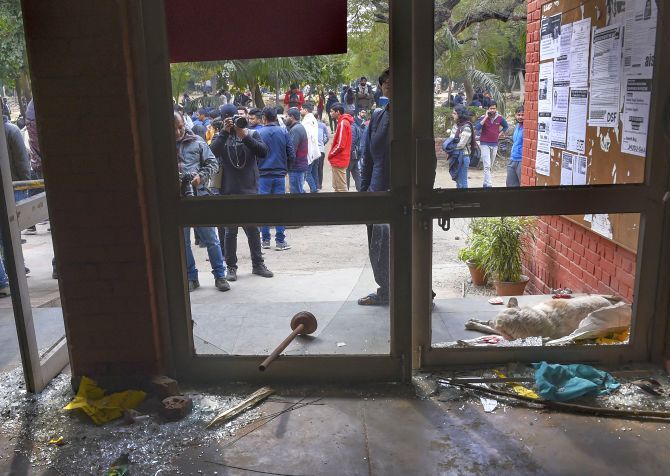 The JNU administration has not yet lodged any FIR against those goons despite many of them have been identified.

Even more outrageous is the fact that though someone from an outfit called the Hindu Raksha Dal has claimed responsibility for the violence at JNU, no action is being taken against him.

He -- as well as the BJP MP from Aligarh, Satish Gautam -- has released videos threatening to carry out similar violence against AMU students if they continue to agitate against the citizenship laws.

Let us recall that the Union home minister had talked of 'teaching a lesson' to JNU students, who are referred to in saffron circles as 'tukde tukde gang'.

This falsehood is propagated through doctored video on a television news channel.

Why cannot the BJP and its affiliates engage itself in debates?

Why cannot the government talk to the agitated people?

Universities are meant to raise most uncomfortable questions and attempting to find answers.

Raising questions has to be appreciated and encouraged.

The BJP regime resorts to criminalising and penalising it.

Armed with State power, when they lose arguments, debates and discussions, they resort to violence against their ideological adversaries.

As if they are not dissenters, but enemies!

This is extremely sad.

This is extremely dangerous for the nation.

This is a self-destructive exercise.

The government turning against its best universities is a huge tragedy.

JNU is already fighting its battle against the fee hike.

The IITs, which hiked its fees for MTech courses four fold, has kept it in abeyance in the face of resistance.

Many private institutes of technology and management have shut down. Confronted with unemployment, students don't feel like investing money to obtain such degrees. IMAGE: A candlelight protest in Amritsar, December 16, 2019, against the Citizenship (Amendment) Act and to show solidarity with the students of Jamia Millia Islamia. Photograph: Munish Sharma/Reuters

Despite being a core insider in academia -- that too at the biggest residential university -- of late, I was becoming a cynic, thinking that the students and youth of today are hedonists, de-politicised, consumerists; that they don't think for the larger world and for disadvantaged people.

I must confess, our students have proved us wrong.

This makes me immensely happy and proud as a teacher.

Their brave resistance, joined by millions of other, keeps our hopes alive that this youth upsurge is strengthening India's democracy and pluralism.

In the late 1960s and early 1970s, some students joined with the peasants in eastern India to launch an armed revolution.

In 1974, students challenged Indira Gandhi's authoritarianism through Jayaprakash Narayan's Sampoorna Kranti movement which had many flaws within it. The rise of menacing majoritarianism in our times has much to do with some of those tactical flaws of 1974.

Now, this lesson and historical experience is certainly before the current movement.

Just as the rural elites, particularly upper OBCs, having studied at provincial universities in local towns, became critical mass support for JP's movement in 1974-1975, the current student upsurge has also got something to do with a certain kind of demographic composition.

In May 1968, France witnessed a huge student upsurge, later joined by the working classes.

All these movements added to the strength of nations and injected necessary correctives in their societies and State systems.

Does India stand to gain with this current youth upsurge?

Professor Mohammad Sajjad teaches history at the Centre of Advanced Study in History, Aligarh Muslim University.
He can be contacted at news@rediff.co.in