'Chief Minister Mehbooba Mufti acted single-mindedly right from day one of the three month-long crisis.'
'She pursued her chosen administrative course, unmindful of the menacing jingoistic drum beating in the coalition backyard.'
'At one point, I asked her if she was willing to pay the price for taking her line of action to its logical conclusion.'
'"Yes," was her spontaneous response,' reveals Mohammad Sayeed Malik, the distinguished commentator on Kashmir. 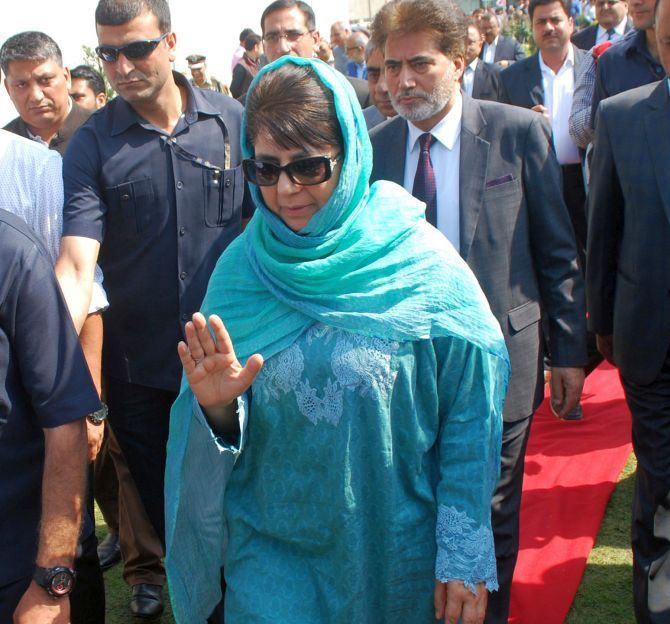 The PDP-BJP coalition in Jammu and Kashmir has just managed to survive and cross the hump. But it has crevasses ahead to negotiate as it embarks upon the crucial second half of its 6-year tenure.

For sure, the superficial truce worked out by the foes-pretending-to-be-friends, in the deafening fallout of the Kathua rape-cum-murder case, is too brittle, too shallow to survive the predicted turbulence ahead.

Feelings on either side are surcharged as a result of the tormented underdog -- the PDP -- suddenly rediscovering its political muscle and the Big Brother -- the BJP -- left to licking the wounds of its moral helplessness inflicted by the compulsion of circumstances.

It is neither forget nor forgive in real terms.

By all indications, the real issues are left hanging. Some of these have the potential to blast not only the uneasy coalition, but much more.

This ominous forecast aside, it is no less interesting to recall how, in these turbulent circumstances, were the two sides able to ward off immediate threat to their coexistence over the Kathua issue.

While there are two or more (mutually contradictory) versions of almost every issue in circulation, one thing is clear beyond doubt: Chief Minister Mehbooba Mufti acted single-mindedly right from day one of the three month-long crisis.

She pursued her chosen administrative course, unmindful of the menacing jingoistic drum beating in the coalition backyard.

At one point, I asked her if she was willing to pay the price for taking her line of action to its logical conclusion. "Yes," was her spontaneous response.

Probably, not many might be aware that she had virtually to move quite a few administrative mountains to bring the closure to tortuous police investigation.

Internally, the coalition began to come apart at its seams in the free-for-all atmosphere.

It is a little known fact that things worsened also because of pulls and pressures within the state BJP.

On one side Deputy Chief Minister Nirmal Singh appeared to be going along with the chief minister in so far as the course of investigation was concerned, but, on the other, Union Minister of State in the PMO Dr Jitendra Singh seemed to be remotely pulling strings in the opposite direction.

This particular factor had more to do (than anything else) with the surcharged/polarised demand for a CBI investigation into the rape and murder and the resultant sharp polarisation over the issue.

Strangely, between January and April, the BJP top brass in Delhi saw it as nothing more than another usual 'Kashmir' bushfire.

That looks to be the only convincing explanation for why such an explosive issue was allowed to hang fire for so long until it engulfed ghe entire country.

Regarding the motivation behind the rape and crime there are a whole lot of issues which could be linked to it.

The nomadic Bakerwal tribes, to which the raped and murdered child belonged, have been traversing the higher reaches and remote areas with their livestock for centuries.

The pattern of their socio-economic relationship with the population in these areas has evolved over decades. Till now, it has survived the sectarian pulls and pressures.

Significantly, from the security angle, the Bakerwals, along with the Gujjar tribes, have been generally accepted as a friendly entity than as a hostile factor.

Breakdown of this decades-old socio-economic equilibrium, under the influence of the Saffron Parivar, has a cascading effect down to individual households.

With the BJP (for the first time) securing a foothold in the power-sharing arrangement (with the PDP) its radicalised cadres sought to turn the social tide against the Bakerwals and Gujjars (Muslims). And that is not limited to remote areas.

Even urban areas, including the city of Jammu, are affected by this flare up.

This line fits into the Jammu-versus-Kashmir and Hindu-versus-Muslim plank of the Saffron ideology.

With these fiery ingredients, the prolonged fallout of the Kathua rape-and-murder case acquired all sorts of ominous dimensions. Right now, only the criminal part of this case has been taken care of. Its other ramifications continue to hang fire.

The two (BJP) ministerial casualties -- Lal Singh and C P Ganga -- have been spitting fire and threatening to charge up the local atmosphere against the chief minister's line of action.

Even otherwise, the PDP-BJP coalition would take quite some time to come out of the recent shock.

The meeting of the PDP functionaries convered by Mehbooba in Srinagar on Saturday, April 14, provided an indication that the BJP hardliners are not going to find it as easy as before to bulldoze their senior coalition partner simply because they happened to be in power at the Centre as has been the case so far.

Quite a few speakers at the PDP meeting made it clear that walking out of the coalition "if things do not change" should remain a distinct option.

Earlier, that was not the case.

The PDP had got used to suffering Big Brother without cribbing. The political fallout of the Kathua case has suddenly altered that balance.

One possibility is that now onward the BJP might find it difficult to ignore the PDP's political compulsions on its home ground -- the Kashmir valley.

The PDP will feel emboldened to seek its pound of flesh out of the forgotten Agenda of Alliance.

Whether the BJP high command, now in election mode across the country, will find it politically convenient to accommodate its ruling partner in J&K without hurting its own electoral prospects would have to be seen.

In the eventual answer to that question lies the future of the PDP-BJP coalition in J&K.

But one thing is certain right now: The PDP is not likely to be ready for a business-as-usual kind of engagement.

It simply cannot afford to do that.

Also, the politically favourable end-result of the recent controversy over handling of the Kathua case (within the coalition) has emboldened the PDP to believe that "We owe something to our existence also."