Now, rise and prove your patriotism

After the Supreme Court ruling on playing the national anthem in all movie halls, Veenu Sandhu misses the innocent days when patriotism was part of our being, not a prescribed potion to bring all our problems to an end.
And no one told us to 'leave', 'get out' or 'go to Pakistan' if we differed. 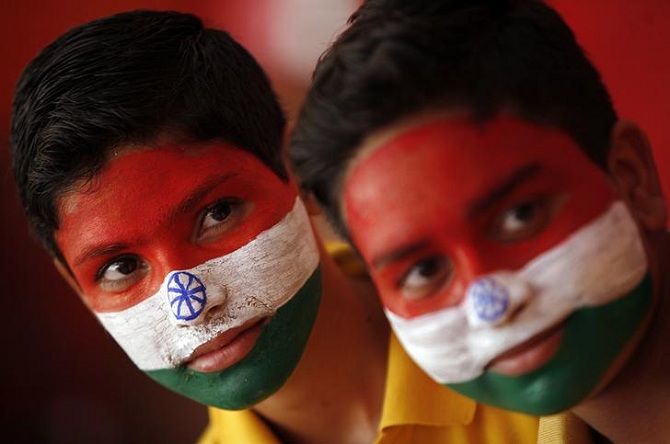 IMAGE: School boys in Jammu participate in Independence Day celebrations.
'We grew up without patriotism being forced down our throats,' says Veenu Sandhu.
Photograph: Mukesh Gupta/Reuters.

Put away that popcorn and cold drink.

Now, rise and prove your patriotism.

The national anthem is playing. Show respect to it.

Or you are in contempt of the highest court of the land.

Imagine this playing out in cinema halls across India.

The Supreme Court has ruled that 'all the cinema halls in India shall play the national anthem before the feature film starts' and given 10 days for the country to implement it.

The top court has decided 'all present in the hall are obliged to stand up to show respect to the national anthem' as a part of their 'sacred obligation.'

It has also decreed that the doors of the cinema halls shall remain shut when the anthem plays to block out any disturbance.

Legal experts have already critiqued the Supreme Court's judgment, which is bound to be interpreted by jingoists as a green signal for vigilantism.

One of the finest legal minds of our times, Soli J Sorabjee, has said the 'the court appears to have entered the realm of judicial legislation and gone much beyond Constitutional mandate.'

Did it have to really, in these times of ultra-nationalism and chest-thumping bullies?

The disturbing shift from carrying within you the spirit of nationalism to exhibitionism is already visible around us.

The country's top court choosing to reduce nationalism to performing a ritual compulsorily does not augur well for democracy.

Particularly for those who find themselves at the receiving end of violent jingoism. Think of Goa's Salil Chaturvedi, the paraplegic man who was assaulted by a couple in a cinema hall in Panaji when he did not -- because he is paralysed waist downwards -- stand up when the national anthem was played. He had represented India at the international level in wheelchair tennis and did not need to prove his patriotism.

On November 26, the country celebrated Constitution Day, or Samvidhan Divas.

The government brought out advertisements listing to the citizens of India their fundamental duties under Article 51-A of the Constitution.

On November 25, Prime Minister Narendra Modi, chairing the Constitution Day celebrations in the Parliament annexe -- conveniently advanced by a day to avoid the weekend ahead -- also spoke of the fundamental duties of the people. Some people misuse their rights and no one talks of duties anymore, Modi said.

Have both the executive and the judiciary ensured the delivery of governance and justice to the last man in the queue, so we can now shift the debate entirely to people's duties?

Is there a bigger fundamental duty than not to trample upon someone else's rights? The unnamed couple in Goa did just that when they assaulted Chaturvedi.

Years ago, in school, the morning assembly was never complete without the national anthem being sung. It was a daily drill we participated in.

Some of us with great enthusiasm: singing along as we stood to attention, no matter how badly we sang. But we never looked down upon those who made through the assembly hung over with last night's sleep as less patriotic.

Patriotism was a part of our being, not a prescribed potion to bring all our problems to an end.

It wasn't something we consciously discussed back then. Partition was just four decades old and the wars we had fought with Pakistan and China were still a part of living memory. But nobody went about thumping their chests declaring that they were desh bhakts or patriots.

We were a younger nation then, still finding our way. But no pressing need was felt to instill 'committed patriotism and nationalism' in us.

We were not dubbed anti-national for taking a counterview of popular, or populist, decisions of the government.

The self-appointed custodians of nationalism did not abuse, torment and terrorise people for expressing opinions they did not agree with.

We grew up without patriotism being forced down our throats. It grew from within us. Even today, when I hear the national anthem playing on TV, I instinctively stand up. I do.

And Chetan Anand's Haqeeqat, with its heartrending music, still moves me the way it did when I first saw it on Doordarshan in the days when the weekly dose of movies was restricted to Sunday evenings.

Yet, I would feel more secure in the knowledge that no one was locking me in a cinema hall and expecting me to behave in a particular way in the name of nationalism.