If there is unity in the Opposition, it is only about regional parties other than the DMK not wanting Rahul Gandhi or any other Congress leader for prime minister, observes N Sathiya Moorthy. 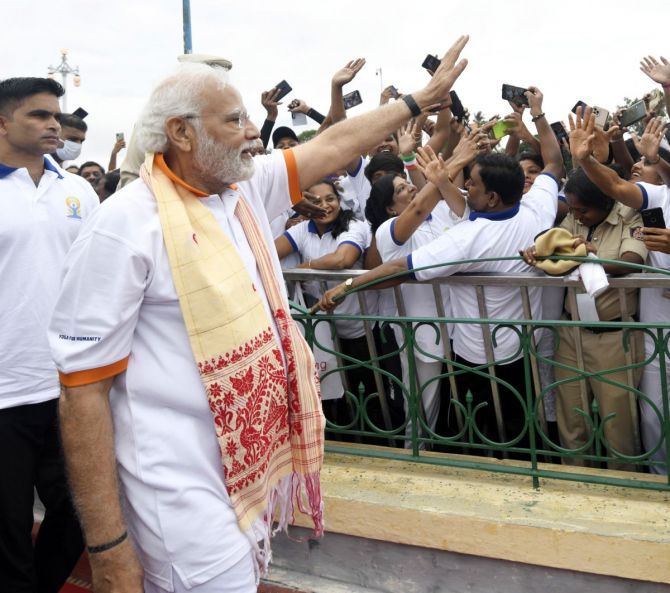 Indians alive to the politics of the early seventies would tell you that Indira Gandhi's Emergency alone had brought the nation's divided Opposition parties together in the 'Janata experiment' that however was destined to fail -- and it did.

There was only so much the ruling Congress party could do force them to come together, but their personal and personality egos would not let them stay together.

The situation is no different today. You replace the Congress and Indira Gandhi of the seventies with the ruling Bharatiya Janata Party and Prime Minister Narendra Modi of today, and the picture is part complete.

For, today, ego clashes have mostly kept the multiple Opposition parties from coming together, as the Rashtriya Janata Dal's Tejashwi Yadav recently said.

But the 'Physician, heal thyself' dictum applies to the RJD and Tejaswi, as they are still not reconciled to working again with Janata Dal-United Chief Minister Nitish Kumar, who, as they rightly point out, had 'stabbed them in the back' back in 2017, when he crossed over to the BJP-NDA to retain power.

Today, Nitish Kumar is continuing uncomfortably as chief minister with his JD-U's 45 MLAs against the BJP partner's 74.

In the 2020 Bihar assembly elections, the RJD still became the single largest party with 75 seats in the 243-member House -- a case of the tail wagging the dog, as BJP veteran L K Advani had said in another context.

Nitish may have begun feeling the heat that it may be his turn next after the exit of Maharashtra's Shiv Sena chief minister Uddhav Thackeray, who in his time had 'stabbed the BJP ally' in the back to cross over to the rival Congress-NCP combine.

But there is more to Nitish's problems as he continues to be tentative about staying on in the NDA for the 2024 Lok Sabha elections.

Given his party's assembly poll performance, even otherwise he cannot expect a 'fair deal' in seat-sharing talks for the Lok Sabha polls.

The larger factor is the long-cherished BJP-RSS dream for a 'Congress mukt Bharat', followed by 'BJP exclusive' states, at least as far as governance matters are concerned, both at the Centre and in individual states.

For reasons of its own, as are known, Bihar is a ripe case.

The question now is if the RJD is ready to work with the JD-U even if it meant Nitish continuing as chief minister for some more time.

Rather, the two have only so much time as the BJP turns its guns on Bihar, invents reasons to split the JD-U, and possibly the RJD, too, if only to teach both Nitish and Tejashwi, a lesson -- a lesson that would be harsher if the two regional parties don't patch up in time.

Bihar is not the only case. In neighbouring Uttar Pradesh with its highest number of 80 Lok Sabha seats, the Opposition Samajwadi Party lost two of its strong bastions to the ruling BJP in recent by-elections, also because Akhilesh Yadav was unable to patch up with the Bahujan Samaj Party's Mayawati, whose candidates chipped away anti-BJP votes in substantial numbers.

Mayawati's other grouse is that the combined Opposition fielding Yashwant Sinha as their common candidate for the Presidency did not even care to consult/inform her.

That was bad tactics, all right, even if they were sure the BSP would still have decided to back the BJP's Droupadi Murumu in the Presidential polls.

They same should apply to the Opposition obviously not reaching out to the ruling Biju Janata Dal in Odisha and the YSR-Congress in Andhra Pradesh.

This generation may not have a Jayaprakash Narayan or an Acharya J B Kripalani, who midwifed the birth the Janata Party, post-Emergency, in 1977.

They were tall Gandhian figures from a forgotten past.

But today, there is not even the likes of then CPI-M boss Harkishan Singh Surjeet, a master political tactician who put together an anti-BJP coalition with 'outside support' from the Congress, after the Lok Sabha polls of 1996.

It may be too late for Nitish Kumar to use the Presidential election to make a decisive announcement, by voting for the Opposition's Yashwant Sinha, but he may not have enough time left, post-poll, for charting out a future course, even if it meant that he stays more loyal to the BJP ally than at present.

That way, by declining to be the Opposition's Presidential candidate, the NCP's Sharad Pawar may have done a great service to his allies and partners as it would have been a huge embarrassment to them all if the high drama in native Maharashtra culminating in Uddhav's resignation had happened mid-way.

Or, was it the BJP's tactical gameplan even while knowing the party's candidate Murmu would win, to embarrass Pawar and more so Uddhav for deserting the party at the 'wrong time'. IMAGE: Tejashwi Yadav, leader of the Opposition in the Bihar assembly, welcomes Chief Minister Nitish Kumar to an iftar at his residence in Patna. Photograph: PTI Photo

In this background, Nitish Kumar's bid to order a caste census in Bihar would definitely cause eyebrows to rise in Delhi.

There is more to it than Bihar's well-known caste politics, which he may want to exploit electorally -- whether he continues with the BJP or joins hands with the RJD, or loses the game in between.

Unlike often believed, Advani's 'rath yatra' did not unite Hindus whom then prime minister Vishwanath Pratap Singh had sought to divide on caste lines, by implementing the much-delayed Mandal Report in 1990.

The truth was Singh sought to further divide majority Hindus on caste lines after the BJP hoped to separate the voters on religious lines.

The point was proved in the post-demolition assembly polls in Uttar Pradesh, in which the BJP beneficiary of the 2002 demolition lost the assembly polls to the caste combination of the SP and BSP.

It can only be theorised what if that alliance had continued and got strengthened. Or, what if the BSP had not joined hands with the BJP, helping the latter to return to power

At this distance in time, it's all wishful thinking. But considering the continuing animosity between the Yadavs and Mayawati in UP two-plus decades later, nothing would have come out of it.

The question is if the BJP would use this split as in the recent by-elections, make the BSP contest the 2024 polls alone and lose badly, or tie-up with Mayawati, and hope for a clean sweep.

Given the caste complexities, the chances are that the BJP would let BSP contest alone -- also using all the pending cases and investigations against Mayawati, to good political use. If there is unity in the Opposition, it is only about regional parties other than Tamil Nadu's ruling DMK, not wanting Rahul Gandhi or any other Congress leader for prime minister.

No one talks any more about Mamata Banerjee or K Chandrashekar Rao, who had thrown their hats into the prime ministerial ring, too early, for 2024.

Arvind Kejriwal's name too kept cropping up, but not anymore.

Naveen Patnaik, Odisha's BJD chief minister with the longest innings in the country, refuses to be drawn into the controversy still.

Both Naveen Patnaik and Andhra's Y S Jaganmohan Reddy, especially the former, sees the BJP as local competition, but continue to maintain good ties with the Modi leadership as if it would help in improving the state's relations with the Centre.

Both Sharad Pawar and Uddhav Thackeray, who many expected to play midwife for a pre-poll coalition, now have mud on their face.

Uddhav has been left with his back to the wall, fighting for survival, at least in the interim. He has more to prove in 2024 nearer home than strategising for the national Opposition.

As a former prime minister, even if accidental, 1996-1998, Karnataka's ageing H D Deve Gowda has lost both stature and substance.

If he loses the Presidential polls, as expected, can Yashwant Sinha play the cupid for Opposition unity too is a remote question.

First, it was Hindutva, now again it is Hindutva and ideological violence.

In between, there was the economy and allegations of crony capitalism, followed now by larger issues of democracy, each one adding to the previous one -- by the month earlier, by the week, since.

Yet, it is only so much the intellectuals could do -- as was the case in the months and years prior to the Emergency -- and also during the Emergency, through underground publications and publications, in the absence of social media, as at present.

They were not a part of the political Opposition then, nor are they one, now.

But unlike the ruling Congress of the time, the BJP counterparts, especially their Hindutva social media activists, do not tire of charging them with it.

The fact is that the Left intellectuals of the present do not have the public standing and political understanding like their counterparts of the 1970s, for them to influence the anti-BJP polity to work together.

There is only so much the BJP and the Modi leadership could do to bring them together.

If still personal egos and personality clashes do not let them come together with the full understanding that the BJP today and the Modi leadership are stronger and more comfortable than the ruling Congress and Indira Gandhi during the Emergency era, they cannot complain -- not certainly against the BJP and Modi.

They only need to look into the mirror, and it alone has the answer!