Mahinda Rajapaksa and Modi have learnt from their past mistakes.
Modi has understood that Rajapaksa is a 'forever politician' that India has to live with, observes Ambassador M K Bhadrakumar. 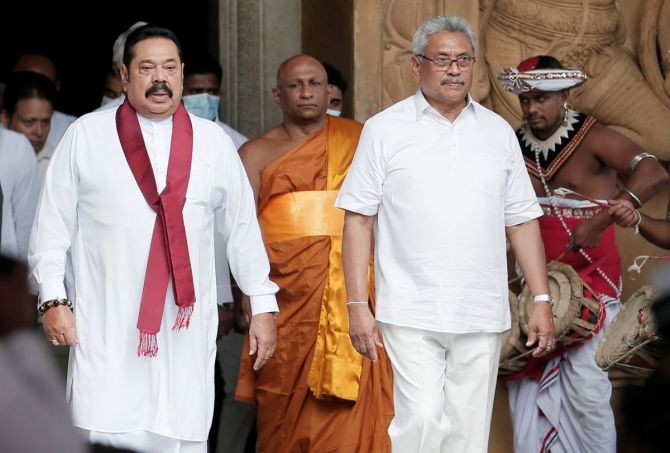 There are three categories of statesmen: Those addicted to Twitter (Donald J Trump, Narendra D Modi, Javad Zarif, et al); those who shun it (Vladimir Putin, Angela Merkel, Xi Jinping, et al); and those have selective uses for Twitter.

Rajapaksa was unusually active on September 17. He tweeted a message of congratulations to the new Japanese prime minister and thereafter turned to convey 'warm wishes' and 'success and the best of health' on Modi's 70th birthday.

Four hours after his message to Modi, Rajapaksa tweeted: 'The Actg. Amb. of China & other dignitaries joined me in a tour of inspection of the Colombo #portcity project that is completing #6yrs since it was conceptualized by both President Xi Jingping of #China & myself. Tried my hand at a round of golf as well while we were there.'

Rajapaksa playing golf on a Chinese turf on Modi's 70th birthday? Three big developments in the geopolitics of Sri Lanka may explain it.

First, on August 26, the US State Department announced sanctions (external link) against 24 Chinese State-owned enterprises, including several subsidiaries of the China Communications Construction Company, which was described as 'one of the leading contractors used by Beijing in its global One Belt One Road strategy.'

Washington has messaged that China 'must not be allowed to use CCCC and other state-owned enterprises as weapons to impose an expansionist agenda.'

In a background briefing on the subject (external link), a senior State Department official in Washington pointedly referred to Sri Lanka, saying, 'In Sri Lanka, there have been longstanding accusations of corruption and bribery involving China Harbor Engineering corp and the Hambantota Port project, which is very well known in the Belt and Road story.'

And in what appeared to be a reference to India, he also claimed, 'The kind of concerns that we have... are very widely shared and increasingly widely shared, and we know that other countries obviously are looking at scrutinising their policies with respect to their diverse relationships with China in terms of business, academic exchange, visa, and much else.'

From all appearances, a renewed US-Indian move is afoot to undermine China's BRI projects in Sri Lanka, especially the flag carrier -- Colombo Port City, which a CCCC subsidiary is executing.

The US sanctions come at a time when Chinese-built infrastructure projects such as the Hambantota Port, Matara International Airport or the upcoming Colombo Port City are lobbying for investment from foreign investors.

A Colombo-based commentator wrote, 'Sri Lanka is confronted with the hard reality of geopolitics... Sri Lanka's external environment has drastically changed... (but) our domestic needs for large scale investments for infrastructure development have not.'

'China remains the place to go... China would be the only large economy to record positive economic growth this year... (India) has recorded negative growth of 16%. Domestic worries would leave little appetite for an expansive (Indian) economic engagement abroad.'

Be that as it may, in a related development only four days later, US Defence Secretary Mark Esper telephoned Sri Lankan President Gotabaya Rajapaksa on August 30 to discuss 'their shared commitment to a free and open Indo-Pacific that ensures the sovereignty of all nations.'

Esper later tweeted that he discussed 'the international security environment' with President Rajapaksa.

In effect, he threatened Gotabaya Rajapaksa under whose stewardship as Sri Lankan defence secretary (while he was a US citizen), the bloodiest phase of the war against the LTTE took place.

That was indeed an extraordinary phone call -- the first in living memory from a US defence chief to a Sri Lankan president.

Esper made the call while on a visit to Guam on yet another Quad mission to counter China.

Colombo has kept mum about the real purpose of Esper's call.

The point is, the US expects Colombo to finalise a Status of Forces Agreement (SOFA) with the US, the handing over of Colombo Port's Eastern Terminal to India, and a $480 million grant agreement with the Millennium Challenge Corporation (an instrument of US foreign policy.)

Washington is insisting an immediate response so that US-Sri Lanka defence cooperation can be integrated into the Quad strategies in the Indian Ocean region. 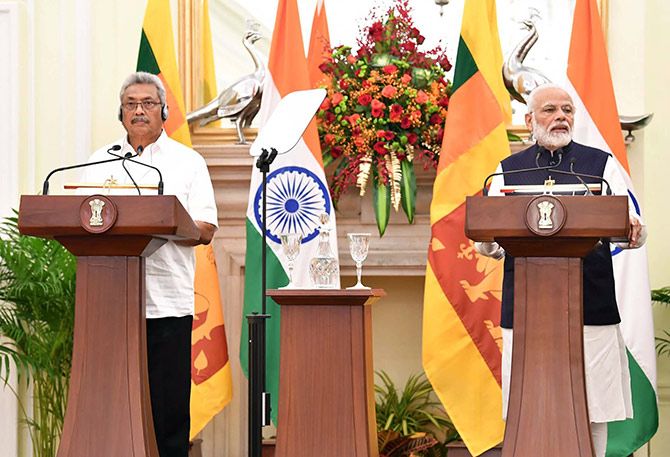 Sri Lankan nationalists oppose the transfer of a Colombo Port terminal to India and any erosion in the country's strategic autonomy.

Foreign Secretary Jayanth Colombage said in a recent interview, 'We have to balance. The President has outlined a few specific things. Sri Lanka should be a neutral country. Sri Lanka does not want to be caught up in the power game.'

What emerges is that the close coordination between Washington and Delhi to counter China in recent years has become the geopolitics of Sri Lanka.

India used to regard Sri Lanka as its backyard and resented foreign military presence there.

But under Modi, the Quad has become the principal locomotive of India's regional strategies.

The first major US-Indian project was the successful regime change in Sri Lanka in 2015.

Since then, India has been working hard to create underpinnings for a US military presence in the Maldives.

These efforts came to fruition on September 10, when Maldives and the US signed a framework for defence and security relationship with view to 'deepen engagement and cooperation in support of maintaining peace and security in the Indian Ocean...and promote a free and open Indo-Pacific.'

It is against such a backdrop that we need to assess a third development that is unfolding on the Sri Lankan turf -- President Rajapaksa's announcement 3 days after the phone call from Esper, proposing a new constitution (external link) for the country signalling changes to its electoral system and the restoration of executive presidency.

Of course, the drafting of a new constitution will be time-consuming.

It will also probably mean that all mega decisions will be relegated to the backburner -- the SOFA, award of Colombo Port to India, MCC agreement, etc.

Meanwhile, Mahinda Rajapaksa's visit to Colombo Port City (external link) on Thursday has underscored that the BRI projects in Sri Lanka are non-negotiable.

Rajapaksa said during the site visit that the Colombo Port City project will be Sri Lanka's main income source in the years to come.

The Sri Lankan prime minister thanked the Chinese government for funding the project.

To my mind, having worked in Sri Lanka as a diplomat in the early and mid-1980s when India was actively promoting the Tamil militant groups, I cannot but admire the tenacity of that country's diplomacy and statecraft to constantly think up ideas to navigate diplomatic minefields and preserve the country's strategic autonomy while also carrying India along.

From such a perspective, Mahinda Rajapaksa's brilliant move last week to ban slaughtering of cows in Sri Lanka is a shrewd initiative.

Sri Lankans, 99 percent of whom are meat eaters, will instead make do with imported beef! To be sure, the tough, wily Sri Lankan leader is aware of the seamless possibilities of bovine politics in the subcontinent (external link), which has an economic dimension, a religious dimension and a political dimension.

Rajapaksa may add a diplomatic dimension to it as well.

The powers that be who rule the roost in Delhi would have received the news from across the Palk Strait with ecstatic joy and fraternal feelings of kinship.

Between the cow and the Quad, their preference is a foregone conclusion.

The heart of the matter is that both Mahinda Rajapaksa and Modi have learnt from their past mistakes.

Rajapaksa erred in his over-confidence that he could outwit Delhi and was unaware of the GM seeds, genetically modified in the Indian and American labs, being secretly planted right beneath his feet, until the sturdy growth uprooted him in 2015.

This time around, Rajapaksa made sure that the ground beneath his feet is made of concrete where not a blade of grass grows.

Modi too has understood that Rajapaksa is a 'forever politician' that India has to live with.

Splitting a political party and doing horse-trading comes easy to Indian strategists, but engineering defections from a tightly knit family is difficult and may prove ultimately futile.