'Now that the Ram mandir is done, we need to move on. And grapple with COVID-19, a sputtering economy, a belligerent China...'
'The temple may win a few more elections for the BJP, but by itself it won't solve the nation's growing problems of economic and social distress,' notes Virendra Kapoor. Jawaharlal Nehru described hydro-power dams, steel mills, research institutes and the like as the temples of modern India.

Where India's first prime minister faltered was that he did not build a sufficiently large number of those temples for them to be able to provide, at the very least, a subsistence- level existence to her teeming millions. His love affair with Fabian Socialism let India down rather badly.

On August 5, Narendra Modi consecrated another temple, a grand temple to Lord Ram, symbolising a confluence of religious-spiritual power, which, he too asserted was aimed at inspiring India's teeming millions to achieve their destiny.

Yet, the temple Modi laid the foundation of was mired in controversy. It had caused deep divisions and polarization in the society.

The prime minister hoped the Ayodhya temple would bring all Indians together in the onerous task of nation-building, but given the events leading up to August 5, 2020, the wounds of alienation inflicted during the long struggle for the Ram temple are unlikely to be healed anytime soon. 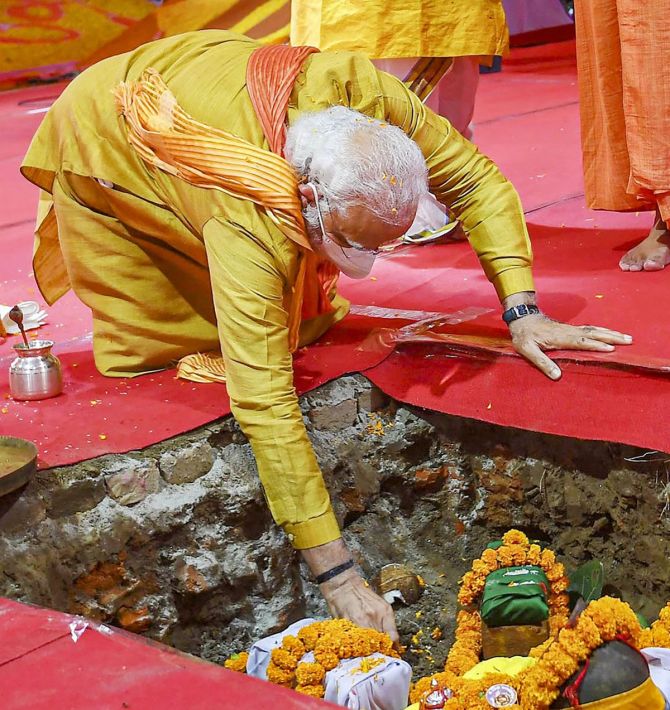 Modi sounded reconciliatory and broad-minded in his eloquent 40-minute address to the largely saffron-clad sadhus present on the occasion and the wider audiences which witnessed the epochal event on television.

He described Ram as Maryada Purshottam, embodying in his godly person the civilisational essence, the culture of Indians, all Indians regardless of their faith and rituals they might observe.

But there could be no mistaking the sullenness of the minorities. The Ram temple had become a grudge match between Hindus and Muslims.

The insistence to build the temple at the very spot where there had stood a long disused mosque erected by an invader king over five centuries ago had ruptured ties between the two communities, shattering the so-called Ganga-Jamuni tehzeeb.

Thanks to the temple movement, the Rashtriya Swayamsevak Sangh-Bharatiya Janata Party and affiliated outfits had gained tremendous traction.

Over two lakh bricks collected in Ayodhya came from villages across the country, some with Sri Ram smelt into them .

Not since the freedom struggle had any movement drawn such an emotionally powerful support cutting across barriers of caste and creed.

Because the RSS-BJP took the ownership of the campaign, others were confronted with a very difficult choice. Rather than taking a clear stand, their ambivalence hurt them further. Hunting with the Hindu hounds and running with the Muslim hares, the Congress almost completely forfeited its erstwhile Muslim vote bank.

Opposing the temple campaign, and yet opening the locks of the disputed structure, where someone in 1949 had surreptitiously kept an idol of Ramlalla, and, on the election eve in 1989, permitting the shilanayas for the construction of the temple, spotlighted the Congress's utter confusion.

Even now it continues to blunder, seeking to share the resulting political and electoral capital from the consecration of the temple.

This will accrue almost exclusively to the RSS-BJP. Tweets of the Gandhi scions on the bhoomipuja revealed they had learned nothing from the mistakes of their father Rajiv Gandhi.

Modi laid the foundation stone of a temple whose political significance in some ways outweighs its religious appeal.

By seeking to reinvigorate the faith in Lord Ram, by invoking the Hindu icon for restoring the 'self-pride and self-assertion' of the Hindu community after centuries of colonial rule, the BJP actually seeks to colonise the political mindscape of the majority community. And it seems to be succeeding.

The mandir will impact the BJP's fortunes in the UP asembly poll in 2022, and later, in the general election in 2024 when it should be ready to be opened at a grand ceremony by Prime Minister Modi.

Instead, saner voices among the Muslims should most gracefully accept the verdict of the highest court in the land.

Living with a sectarian past will prevent any prospect of a peaceful present and will certainly mar the future of coming generations. If the temple in Ayodhya at long last helps apply closure to the campaign for righting the wrongs of history, if it leaves untouched similar structures in Mathura and Kashi, the two communities should shed the emotional baggage of bitterness and recrimination and join hands to together fight poverty, hunger, disease, illiteracy.

Poverty is endemic to both communities. Men of goodwill on both sides need to take the lead in applying the salve of humanity to the sectarian wounds.

The armchair critics predict the death of secularism and the Republic with the consecration of the temple.

Indian secularism did not die when the sub-continent was brutally, nay, barbarically divided to create a separate Muslim nation.

It did not die when the disputed structure in Ayodhya was demolished in December 1992.

It did not die when the self-avowedly Hindu BJP came to power, first under Atal Bihari Vajpayee, and now with a full majority of its own under Modi.

The eclecticism of the Hindu religion survived centuries of Islamic and Christian rulers. IMAGE: BJP workers holding their party flag walk along a decorated street on the eve of the bhhomi puja in Ayodhya. Photograph: PTI Photo

Hinduism is unlikely to undergo a drastic transformation now with or without the prodding of the current ruling class.

For Hinduism, above all else, is a way of life, not a religion encapsulated in a single sacred book or a small body of external rituals.

For a Hindu his god resides in her/him --- s/he does not need to go to a church or a mosque or even a synagogue to be a good Hindu.

India is a democracy because it is majority Hindu. Scan around and see which nation in our vicinity has escaped the pressure of the religious zealots to remain secular. Self-styled secularists should cease over-interpreting the bhoomi puja.

Now that the mandir is done, we need to move on. And grapple with COVID-19, a sputtering economy, a belligerent China, etc.

The grand temple to Lord Ram might win a few more elections for the BJP, but by itself it will not solve the nation's growing problems of economic and social distress.

For that, we need to build many more temples of the kind the first prime minister referred to while opening the Bhakra-Nangal dam in 1963, but failed woefully while 18 years in power.