We may be witnessing a slow erosion of the democratic republic and the emergence of the police State, warns Sunanda K Datta-Ray. 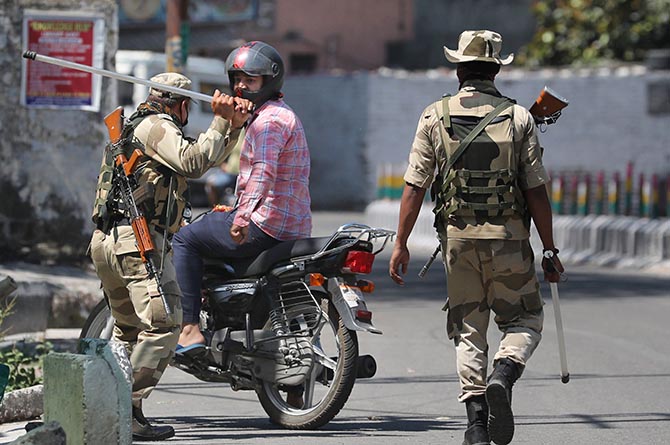 We live in perilous times.

Not only because of the dreadful disease that threatens to overwhelm the world, but also because of the no-less-dreadful things done in its name to save us from coronavirus.

As a result, we may be witnessing a slow erosion of the democratic republic and the emergence of the police State that has never been far from the surface in a land that lovingly retains the institutions and instruments of colonial control.

Much depends on how 'lockdown"=' is interpreted.

Is it advisory or mandatory?

Does it mean total 24-hour curfew with strict orders never to set foot outside the house?

Who can go out and with what authorisation? None of this has been made sufficiently clear to the general public.

The prime minister's rallying sermons give the impression of urging people for their own good not to congregate with others, and to respect social distancing norms.

That sounds reasonable. In practice, the police and petty bureaucracy seem determined to impose a far more rigorous regimen on bewildered and suffering people.

Take the 27 Odisha and Andhra Pradesh workers who braved the Bay of Bengal in an old tub, sailing from Chennai to land near Ichhapuram.

They had to make their arrangements in secret and avoid Navy and Coast Guard vigilance.

Why? Fishing has been banned, but surely the high seas are as free for travel as the highways?

There can be no objection to the men being taken into custody when they landed if it was only to test them for coronavirus.

But arrest would be illegal unless the law has surreptitiously been changed to outlaw freedom of movement.

The arrest of 20 people, some accompanied by their dogs, during their evening constitutional in Mumbai's upmarket Bandra and Pali Hill area seems even more incomprehensible.

The walkers were later released on bail, but the arrest itself was an outrage.

In Kolkata, I hear constantly of harmless lower class citizens being bullied and intimidated in the name of the pandemic.

Three road sweepers going to report for duty were roughly ordered to turn back instead to whence they came.

Another time, the private chauffeur of an elderly couple who had been to the pharmacy for his employer on foot but alone was ordered to appear in court.

The man showed the prescription for medicines he had bought to no avail.

TV pictures are horrific -- men forced to do sit-ups holding their ears, press-ups, touch-toes, hop like kangaroos and roll in the dust like pilgrims, all to satisfy egotistic or sadistic policemen who take intimations as literally as the murderous knights who killed Thomas Becket in response to Henry II's 'Will no one rid me of this turbulent priest?'

Discipline and obedience are essential in a crisis of this nature, which is undoubtedly why Narendra Damodardas Modi's measures are admired abroad.

Donald Trump accuses the World Health Organisation of many sins of omission and commission, but he and the WHO have one thing in common: Both are full of praise for Modi. 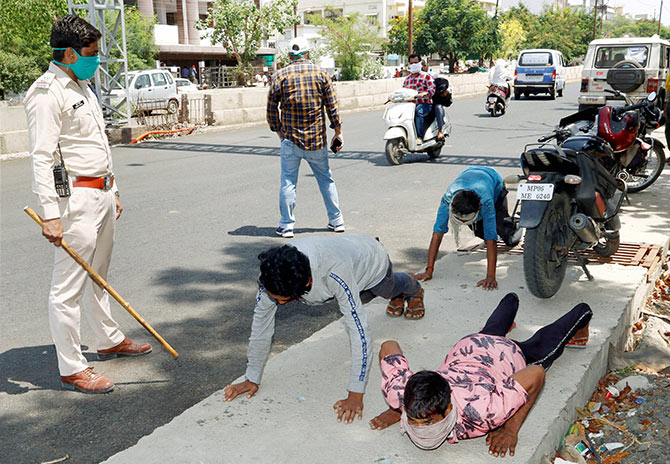 IMAGE: Policemen punish individuals who ventured out during the lockdown in Jabalpur. Photograph: PTI Photo

Whether or not the hydroxychloroquine Modi agreed to export to the US after being threatened with "retaliation" actually helps to combat COVID-19, Trump thinks it was 'terrific' of him to lift the ban.

Modi not only spared India the retaliation that crippled Iran, but also threw business in the way of three Gujarat-based companies that will ship the tablets.

'Thank you, Prime Minister for your strong leadership in helping not just India, but humanity, in this fight!' Trump gushed.

'Grateful to see that you're seeking to balance public health imperatives with the need to ensure adequate social protection for all Indians,' was Bill Gates's compliment, commending Modi's 'leadership and the proactive measures'.

Gates, Trump and the WHO don't get to know of the little abuses in our back streets, the threats, violence, exploitation and palms greedily extended.

Enlisting the army's help would be an antidote.

So would a clear enunciation of lockdown dos and don'ts.

We need full cooperation between the Centre and states.

Also between the ruling and Opposition parties.

And between Hindus and Muslims.

Money has to be spent regardless of return.

There should be far greater sympathy for the travails of migrant and daily wage labour.

It cannot be solved without humanity.

There's a danger otherwise that the lawless tyranny of 17th century Magh (Mog) pirates sweeping up the Hooghly that still haunts Bengal's collective memory as Moger muluk might become a national reality.