If the Congress recovers some of its earlier influence among the Dalits, the BJP will be in a quandary since the Dalits were among the party's latest acquisitions.
To lose them will be a disaster for the saffron camp not only in UP, but all over India, observes Amulya Ganguli. 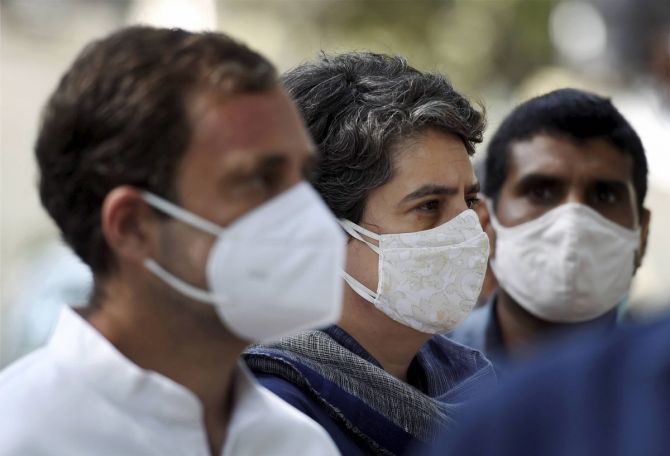 IMAGE: Congress leaders Rahul Gandhi and Priyanka Gandhi Vadra on their way to Hathras to meet the family of the 19-year-old woman who died after she was assaulted and allegedly gang-raped, October 3, 2020. Photograph: Atul Yadav/PTI Photo

When the BJP sees an international conspiracy, as it is doing now following the Hathras incident, it means that the party believes that it is in deep trouble.

For smaller troubles, it blames local anti-nationals or urban Naxalites.

But when the BJP senses that it is very much on the back foot, it needs to lambaste a larger adversary.

Only by broadening the focus to encompass the whole world that the party believes it can extricate itself from the mess.

Hathras is one such quagmire.

The tragedy has all the ingredients which can wrong-foot the BJP -- the rape of a young girl, the Dalit connection, the suspected involvement of upper caste men, the egregious conduct of the policemen in cremating the victim in the dead of night, the cordoning off of the girl's home and virtually the entire village for more than a day, the felling of two Opposition MPs by overzealous policemen.

And now, the UN has expressed concern over the incident.

Here's where the world's 'conspiracy' can be detected.

An earlier occasion when the BJP saw a nefarious international plot was in the aftermath of the burning to death of an Australian Christian missionary, Graham Staines, and his two sons as they slept in a vehicle in Odisha in 1999.

The person who made the charge was George Fernandes, a former member of Socialist International (!), during a two-hour visit to the site of the arson and death with Murli Manohar Joshi and Naveen Patnaik sitting demurely by his side.

The trio were there at the behest of the Atal Bihari Vajpayee government in the wake of the allegations that the Bajrang Dal was involved in the incident.

But Odisha is far away from the Sangh Parivar's Hindi-Hindu-Hindusthan karmabhoomi in the cow belt.

The BJP has never been in power there except as a junior partner of the Biju Janata Dal, which came to an end after another round of anti-Christian violence in 2008.

But UP is different.

So is Ajay Mohan Bisht aka Yogi Adityanath, who is the handpicked choice of the BJP's top echelons for the chief minister's post.

Bisht must have also pleased his bosses by the pursuit of his hardline Hindutva politics -- renaming places with alien -- Muslim -- names, letting the police loose in Muslim localities following disturbances, putting up posters to name and shame the alleged rioters which the Allahabad high court found to be a violation of the rights of privacy, categorising Indian citizens between Alis and Bajrang Balis, and so on.

Little wonder that Bisht has been talked about as a possible future prime minister.

Now all that is under a cloud after what Supreme Court has called a 'horrible' incident.

An additional problem is the wind which the episode has blown into the Congress's limp sails.

If the Congress succeeds in recovering some of its earlier influence among the Dalits, the BJP will be in a quandary since the Dalits were among the party's latest acquisitions.

To lose them will be a disaster for the saffron camp not only in UP, but all over India.

What can be the way out?

The only escape route is to see a 'foreign hand' in the event as Indira Gandhi also used to do when in trouble.

As the reaction of the BJP's trolls to the Amnesty International's departure from India showed, the Hindutva netizens saw the humanitarian organisation as a modern-day version of the East India Company.

Like the predatory English buccaneers of the 18th and 19th centuries, the saffronites see Amnesty as a band of foreign conspirators.

Will the BJP succeed in applying the same label to the Hathras tragedy?

Much depends on the ingenuity of its spin doctors.