June 06, 2008
Mohammed Hanif's novel A Case of Exploding Mangoes, published by Random House India today, June 6, will unquestionably be one of the most talked about books of the year.

Readers will, of course, remember Hanif from his memorable feature on the return of Nawaz Sharif and his commentary on General Musharraf

Rediff.com is proud to publish an exclusive extract from what we believe is the fiction debut of the year.

You might have seen me on TV after the crash. The clip is short and everything in it is sun-bleached and slightly faded. It was pulled after the first two bulletins because it seemed to be having an adverse impact on the morale of the country's armed forces. You can't see it in the clip but we are walking towards Pak One, which is parked behind the cameraman's back, in the middle of the runway. The aeroplane is still connected to an auxiliary fuel pump, and surrounded by a group of alert commandos in camouflaged uniforms. With its dull grey fuselage barely off the ground, the plane looks like a beached whale contemplating how to drag itself back to the sea, its snout dropping with the enormity of the task ahead. 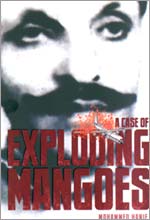 The runway is in the middle of Bahawalpur Desert, six hundred miles away from the Arabian Sea. There is nothing between the sun's white fury and the endless expanse of shimmering sand except a dozen men in khaki uniforms walking towards the plane.

For a brief moment you can see General Zia's face in the clip, the last recorded memory of a much photographed man. The middle parting in his hair glints under the sun, his unnaturally white teeth flash, his moustache does its customary little dance for the camera, but as the camera pulls out you can tell that he is not smiling. If you watch closely you can probably tell that he is in some discomfort. He is walking the walk of a constipated man.

The man walking on his right is the US Ambassador to Pakistan, Arnold Raphel, whose shiny bald head and carefully groomed moustache give him the air of a respectable homosexual businessman from small-town America. He can be seen flicking an invisible speck of sand from the lapel of his navy-blue blazer. His smart casual look hides a superior diplomatic mind; he is a composer of sharp, incisive memos and has the ability to remain polite in the most hostile exchanges. On General Zia's left, his former spymaster and the head of Inter Services Intelligence General Akhtar seems weighed down by half a dozen medals on his chest and drags his feet as if he is the only man in the group who knows that they shouldn't be boarding this plane. His lips are pinched and, even when the sun has boiled everything into submission and drained all colour out of the surroundings, you can see that his normally pale skin has turned a wet yellow. His obituary in the next day's newspapers would describe him as the Silent Soldier and one of the ten men standing between the Free World and the Red Army.

As they approach the red carpet that leads to the Pak One stairway you can see me step forward. You can tell immediately that I am the only one in the frame smiling, but when I salute and start walking towards the aeroplane, my smile vanishes. I know I am saluting a bunch of dead men. But if you are in uniform, you salute. That's all there is to it.

Later, forensic experts from Lockheed will put the pieces of crashed plane together and simulate scenarios, trying to unlock the mystery of how a superfit C130 came tumbling down from the skies only four minutes after take-off. Astrologists will pull out files with their predictions for August 1988, and blame Jupiter for the crash that killed Pakistan's top army brass as well as the US Ambassador. Leftist intellectuals will toast the end of a cruel dictatorship and evoke historic dialectics in such matters.

But this afternoon, history is taking a long siesta, as it usually does between the end of one war and the beginning of another. More than a hundred thousand Soviet soldiers are preparing to retreat from Afghanistan after being reduced to eating toast smeared with military-issue boot polish, and these men we see in the TV clip are the undisputed victors. They are preparing for peace and, being the cautious men they are, they have come to Bahawalpur to shop for tanks while waiting for the end of the cold war. They have done their day's work and are taking the plane back home. With their stomachs full, they are running out of small talk; there is the impatience of polite people who do not want to offend each other. It's only later that people would say, Look at that clip, look at their tired, reluctant walk, anybody can tell that they were being shepherded to that plane by the invisible hand of death.

Click here to read Part II: 'I was the one who got away'

Excerpted from A Case of Exploding Mangoes by Mohammed Hanif, with the kind permission of its publishers, Random House India. The book can be ordered directly from www.randomhouse.co.in