A chandelier is a room's beaming smile, its greatest jewel and all the glamour and grandeur a movie needs.

Few props are a source of affluence or old world charm like it is.

Sukanya Verma celebrates chandeliers on celluloid and their most memorable moments in Hindi films. 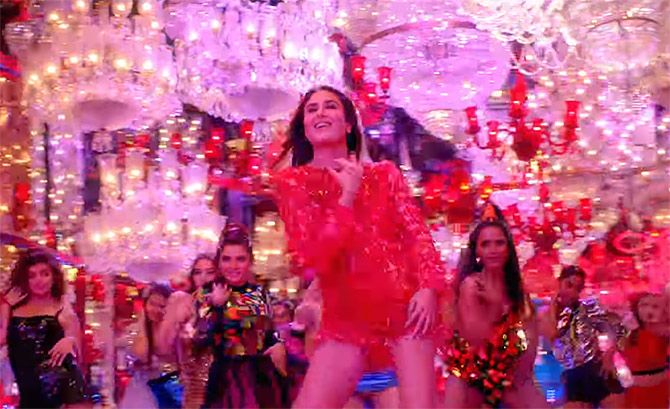 You'll see a jaw-dropping number of those forming a colourful backdrop to stars like Akshay Kumar, Kareena Kapoor Khan, Diljit Dosanjh and Kiara Advani as they harp something about buying home in Chandigarh.

Directed by Raj Mehta, the Karan Johar production revolves around a pair of couples conceiving through IVF and the comic confusion that ensues owing to identical surnames.

Filmmaker K Asif spared no expense to turn his epic historical an extravaganza for the ages. It requires multiple viewings to soak in its brilliant performances and breathtaking sets.

Mughal-E-Azam is an exercise in opulence and those gorgeous chandeliers -- especially the one under which Madhubala defiantly declares Pyar kiya toh darna kya -- are part of its lifelong attractions.

Kamal Amrohi's poetic, long-in-the-making Paakezah is a masterclass in splendour.

It begins with the sight of Meena Kumari dancing under a glowing chandelier and unravels the majestic interiors of Gulabi Mahal, which has quite a few luminous ones of its own.

The movie begins inside a spooky, desolate palace against the sound of the whooshing wind and an old caretaker recounting the tragic love story of its original inhabitants to its new resident, while setting up the lights of a huge chandelier.

Ashok Kumar couldn't have asked for a creepier introduction scene.

It's a pity Rajendra Kumar doesn't get the girl or live happily ever after despite owning such a luxurious mansion in Raj Kapoor's love triangle Sangam, co-starring Vyjayanthimala.

The dazzling chandelier in his living room is not only worthy of 'neighbour's envy, owner's pride' but also a witness to a lot of dance, drama and eventually, his death.

The classic chandelier in Pran's palatial home in Madhumati is both a reminder of a previous life and an eerie prop to introduce elements of danger and intrigue to its proceedings.

Madhumati's influences loom over Farah Khan's musical masala, as she pays tributes to films and filmmakers of a bygone era in Om Shanti Om.

When Arjun Rampal proposes marriage to Deepika Padukone on the sets of a movie he plans to convert into a wedding venue only to burn it all down to kill her and when Deepika's ghostly avatar uses its force to crash down upon him in the climax, the chandelier is both witness and weapon.

The heady combination of those exquisite chandeliers and a glossy Rekha is a vision we keep returning to.

The revolving tables restaurant in London where actor-director Manoj Kumar spouts most of his desh prem wouldn't have its sheen in the absence of the imposing chandelier.

A massive chandelier pops up again in Bharat Kumar's jingoistic multistarrer when a sloshed Parveen Babi somersaults on top of it and shakes a leg to Mara thumka.

The films of Nasir Hussain

The films of Yash Chopra

Yash Chopra's love for good-looking romances paved the way for dreaming against Swiss Alps and flirting over cheerful wedding songs or party numbers under a sparkly chandelier.

Once we made a list of Subhash Ghai's signature style and traits in all the big-budget entertainers he's known for till date.

Needless to say, in films like Karz, Karma or Khalnayak, a giant chandelier is up there among his go-to props.

A really big chandelier competes with Madhuri Dixit and her million-watt smile, as she pretends to play Saajan's superhit song, Bahut pyar karte hain tumko sanam on a piano.

Sooraj Barjatya's blockbuster is a romance blossoming between family functions, and one of them involves Salman Khan sneaking into a ladies-only sangeet, only to get caught. Madhuri then ribs him by singing Didi tera deewana.

He dives on to the grand chandelier and admits to his mistake, playfully adding, 'Kudiyon ka hai zamana.'

Set around an estranged royal family baying for each other's blood and money, Sooraj Barjatya's Prem Ratan Dhan Payo isn't in the same league as HAHK. Yet, he goes all out to give it a ritzy look.

There's a good chance its Sheesh Mahal-inspired sets and a shiny chandelier are your only takeaway from this done-to-death drama.

But it's only when Bhansali adapted Sarat Chandra Chattopadhyay's Devdas for the silver screen that one realised the degree of opulence he's capable of.

Every frame of his version is a work of ornate artistry.

The gleaming chandeliers under which Madhuri Dixit performs some brilliant dance moves, as Chandramukhi, amply highlight this quality.

Karan Johar ropes in all the major stars for his sentimental family drama, K3G, and makes them dance in true filmi style under a couple of magnificent chandeliers in the richly choreographed Bole churiyan.

His ability to dole out grandeur has only gotten bigger and better since.

No matter what one thinks of the movie or its visual overkill, the chandeliers and lotus pond of Kalank are too wow a presence to be dismissed because the movie didn't work. 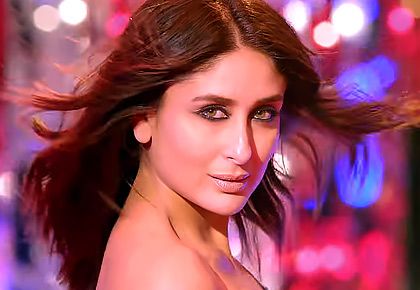