What Thor likes about India Shooting in India was like doing live theatre with thousands of people watching and cheering every take, Chris Hemsworth says, as he looks back at the making of his new film Extraction in Mumbai and Ahmedabad.

The star, known for his superhero persona Thor in the Marvel Cinematic Universe films, was supposed to travel to India in March to promote the film, but the trip got cancelled because of the coronavirus outbreak.

"Thousands of people up in the buildings and bridges watching and we'd call 'cut' and they'd all start cheering and applauding," Hemsworth says at a virtual press conference in response to a question from PTI.

Chris was in India towards the end of November 2018 to shoot for the film.

"It was like being in the Colosseum or a live theatre, which is very new to me, but quite a lot of fun," Chris adds from his home in Australia.

Joining him at the press conference was Extraction Director Sam Hargrave.

The Netflix production, set in Mumbai and Dhaka, revolves around Chris's character, Tyler Rake, a former military man-turned-black market mercenary with emotional scars, embarking on a dangerous mission to extract the child of an Indian drug dealer from his rival in Bangladesh. Chris had never shot in India before, making the experience more unique.

"I have such pleasant memories of people and interactions there, and a lot of enthusiasm and positivity. There was real excitement for us shooting there. We had never shot there before," he recalls.

"From the crew it felt like there were not many films like this being shot there so there was a unique sort of originality to it," he adds.

Extraction brings together the talent from the last two Avengers movies: It is based on a script by film-maker Joe Russo and marks Hargrave's directorial debut. Hargrave was a stunt coordinator on Russo's Endgame.

Hargrave, who joined in from Los Angeles, says the reason for Russo setting the film in India and Bangladesh was because it's a part of the world Western audiences are yet to explore.

"Western audiences have not seen that side of the world. It is a very unique setting," says Hargrave. "It offered a lot of opportunities visually because it is a stunning part of the world. There were logistical challenges while shooting the film in India, but it also made the process fun." After India, the team moved the production to a place near Bangkok, Thailand.

"We were shooting a lot of intricate action sequences, so sometimes we would have cars flying down the streets 30 to 50 miles an hour and you had to lock up the streets," says Hargrave.

"You had 300 security personnel just to make sure that no one got hurt because as crazy as you want to make these action sequences, safety is our number one concern. So that was one logistical hurdle that we came through with a great crew," he adds.

Hargrave was particularly impressed with the local crew.

"It was a really fun environment to make a movie. The energy was palpable, you could feel it. It kind of made going to work fun," he remembers.

The film is slated to drop on April 24 on Netflix.

Chris says his only hope is the film, which has stunning action sequences shot without the aid of a green screen and visual effects, gives people a chance to escape to a different world under the lockdown.

"If it provides an escape to people, then it's fantastic. That's what I love about cinema or art form; (it) is that you are able to be transported to another place and experience... if you are isolating, there is a great joy in that. I have spent many of my hours watching my favourite films and new TV shows," he says. 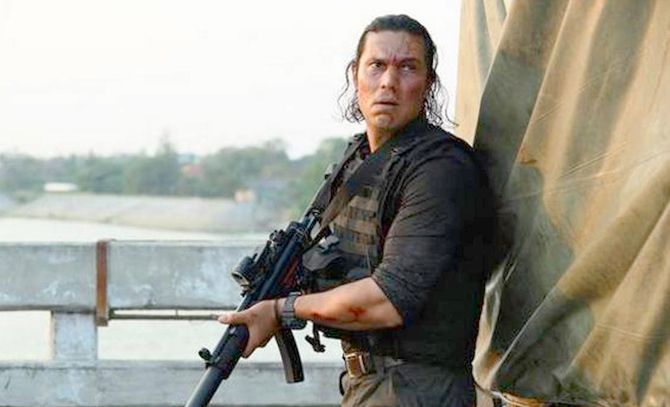 Chris says he didn't get a chance to catch up on Hindi movies during his Mumbai stay, but loved collaborating with local talent, especially Hooda.

"Most of my stuff was with Randeep. We had fight sequences and hand-to-hand combat and endless rehearsals. It was so exhausting for both of us and yet, when you have got an actor opposite you who is putting 110 per cent, it's a team effort. Neither of you is willing to quit," Chris says.

Hargrave also praises Hooda as a person with "depth and gravity".

The director says it was "a bit daunting" to direct actors of incredible quality in the language that they understood, but he didn't.

Despite not understanding the language, Hargrave says he knew when the scene felt off.

"That's one of the beauties of cinema because you may not be able to speak the language but you understand the scenario and intention in that scene..."

Chris says the story, a redemptive tale about an emotionally scarred man with a moral compass, has the feel of old Western movies of the 1970s and 1980s, giving it a layer of authenticity.

"It is a straight kind of narrative, there is a moral compass, but there is a sort of grey area... Due to Sam's (the director) talent to do everything they used to do back in '70s and 80s... you didn't rely on special effects... It was rewarding to shoot like that." Bedika
© Copyright 2020 PTI. All rights reserved. Republication or redistribution of PTI content, including by framing or similar means, is expressly prohibited without the prior written consent.