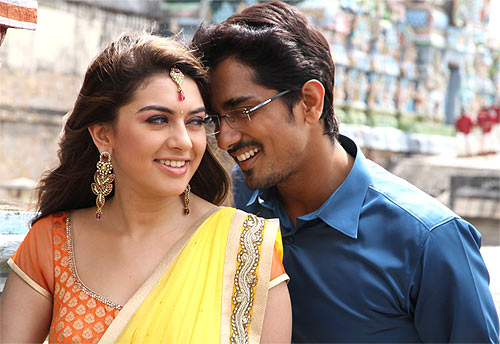 Theeya Velai Seiyyanam Kumaru is the title of the new film directed by Sundar C for UTV Motion Pictures. The long title means 'Work like fire, Kumaru' and Kumaru is none other than Siddharth. Giving him company are Santhanam and Hansika Motwani.

and we are planning more films with him.

According to Dhananjayan, “Theeya Velai Seiyyanam Kumaru is just a romantic comedy and not a pure comedy. The whole script is based on love (between Siddharth and Hansika) and a love guru (Santhanam).

It was director Sundar C's decision to cast Siddharth and Hansika in the lead roles as they wanted to bring in a new pair who will appeal to both Tamil and Telugu audiences as the film is a bilingual.

Kumaru, played by Siddharth, is a shy and introverted person from a small town who falls in love with this trendy modern girl Ashwini (Hansika). It is here that Love Guru (Santhanam) enters the scene to help him get his love. The producer of the film assures us that there are some interesting twists and turns.

The shooting of the film is going on in Hyderabad, Chennai, Kumbakonam and Japan.