Rhea Chakraborty is in the news for, sadly, all the wrong reasons.

The 28-year-old actress is embroiled in a nasty controversy related to her boyfriend Sushant Singh Rajput's death by suicide.

Sushant was found dead in his Mumbai apartment on June 14. His father K K Singh filed a case of abetment to suicide and fraud on July 25 against Rhea, her brother and her parents.

As the case gets nastier by the day -- with the coverage on some news television channels getting shriller and uglier -- Namrata Thakker finds out more about the woman at the centre of it all. She was the first runner-up on the show. She became a VJ, hosting several shows on MTV. The good looking actress did her schooling at the Army Public school, Ambala.

Her father Indrajit Chakraborty served the Indian Army as a doctor. Her mother Sandhya Ckakraborty is a homemaker. After making her acting debut in the Telugu film Tuneega Tuneega in 2012, Rhea entered Bollywood in Mere Dad Ki Maruti the following year. The movie was backed by Y-Films, a subsidiary of Yash Raj Films, and co-starred Saqib Saleem. Since her Bollywood debut in 2013, Rhea as done five films including Mahesh Bhatt's 2018 production, Jalebi, her last big movie. Around this time, Rhea courted controversy after she posted some candid pictures of her with Mahesh Bhatt.

Giving it back to the trolls, the young starlet shared the above picture on her Insta feed and wrote, 'If the trolls can hurl muck and filth of their minds, which comes out of their depraved souls, then all our claims of having moved away from the dark ages are bogus. Hey guys, don't you know you see the world AS YOU ARE, not AS IT IS.' In April 2019, Rhea allegedly started dating Sushant Singh Rajput. Though the duo never confirmed their relationship, she made it Insta-official this January. On Sushant's birthday on January 21, Rhea posted a cute picture of them on Instagram and wrote, 'Happy birthday to the most beautiful super massive black hole that is known to mankind! Shine on you crazy diamond.' Last October, the couple had taken an European vacation, exploring several places around France and Italy. Did Sushant pay Rs 50 lakh for their holiday? One of the pictures from their Euro vacay: Rhea in front of the Eiffel Tower in Paris. Sushant and Rhea were in a live-in relationship and she left their Bandra apartment in northwest Mumbai six days before his death. After Sushant's death, Rhea refrained from posting on social media. Only after a month did she take to Instagram to pen a long note for him. Last month, Rhea's brother Showik shared pictures of him with Sushant on his Instagram account, calling Rajput his inspiration and brother. Rhea, accompanied by Showik, has appeared before the Enforcement Directorate which filed a case against the actor. 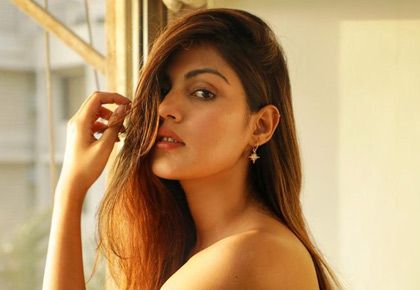