'What we think is being patriotic is quite opposite to what actually is patriotism.'
'You have to do things for your country.'
'You have to add value and participate in actions that are not beneficial only to you.'
'That's when I decided to do a lot as an individual and as an artiste, who has 'x' number of followers on Instagram.'
'What is the point of having so many followers if I cannot use my voice for some good?' 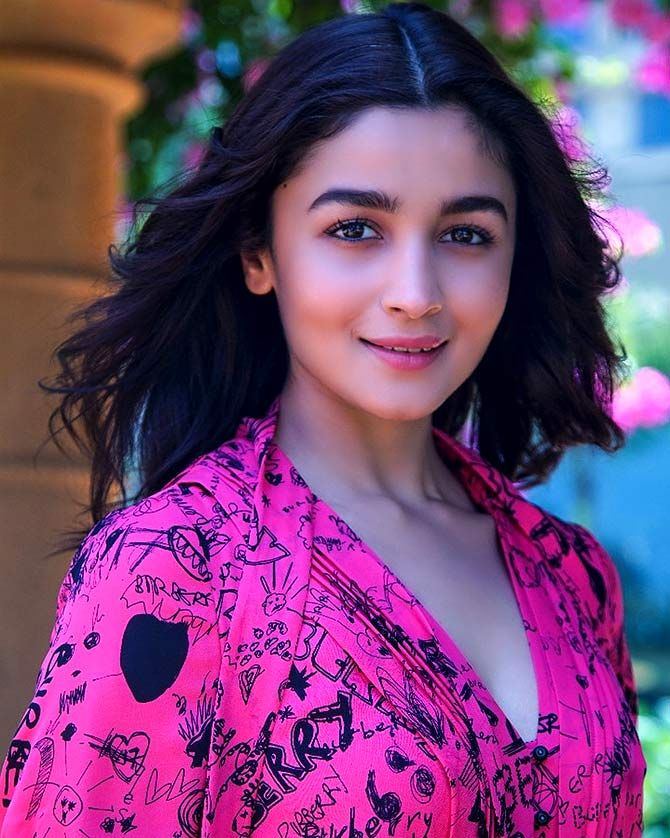 Just as Meghna Gulzar winds up an interview, her Raazi star Alia Bhatt sashays into the room.

Almost immediately, an alarm sets off at the five star hotel, where the Raazi promotional interviews are taking place.

The media is asked to vacate the room, but we soon realise it is a mock fire drill.

"We are not dying today, guys. Apna time nahi aaya hai," Alia assures the media, in her nonchalant way.

"Today has been a good day," she adds. "I slept for eight hours last night. When I sleep, I am good!"

Alia hums Mere Mehboob Mere Sanam (a song from Duplicate, the Shah Rukh Khan starrer which her father Mahesh Bhatt directed and was released in 1998 when she was just five years old), as she gets ready for the interview.

The actress is animated when she speaks -- her hands keep flying all over the place -- and it doesn't take her long to realise it. At that point, she places both hands under her legs so that they don't move!

It was a very big opportunity for me because it is a true story.

When you are part of a true story, you automatically feel a sense of responsibility, even though we have not seen the real Sehmat.

It was also a great opportunity for me to create the character from scratch, even though it was mentioned exactly how she would be in the script.

I believe once you crack the way this girl speaks, everything else is done for you.

The way you speak is a big depiction of your personality. 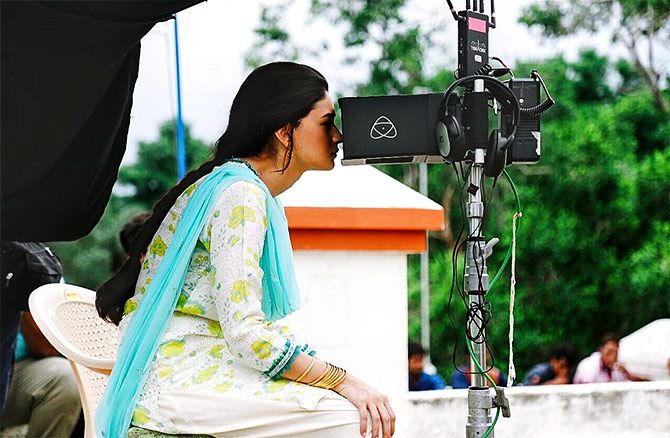 What has Raazi taught you?

I learnt that what we think is being patriotic is quite opposite to what actually is true patriotism.

Patriotism to us would be believing in your country.

I love my country. But that is not enough.

You have to do things for your country. You have to add value and participate in actions that are not beneficial only to you.

That is what I understood from Sehmat and this journey.

That's when I decided to do a lot as an individual and as an artiste, who has 'x' number of followers on Instagram.

What is the point of having so many followers if I cannot use my voice for some good? 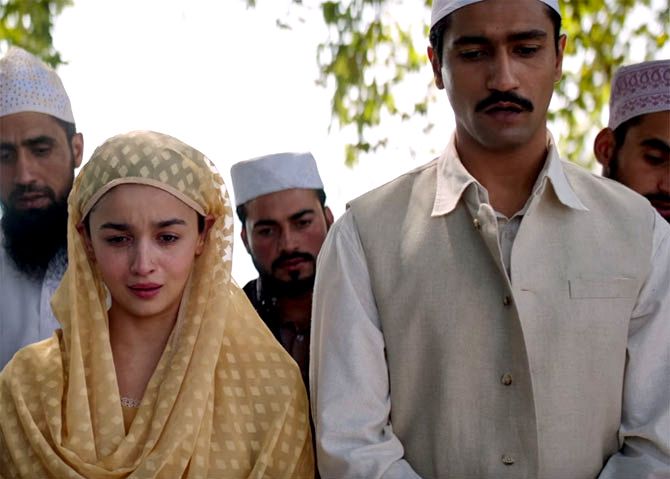 Your co-star Vicky Kaushal tells us you are very accident-prone.

I have had so many injuries in my life.

I have torn my calf muscle, my ankle, a gluteal muscle.

I injured my shoulder during Brahmastra, I hurt my back.

I think only my thumb is left.

How was it working with Vicky Kaushal?

It was lovely. He is a fabulous actor.

Ever since I saw Masaan, I felt he was someone I have to work with because I will learn so much from him.

He is very essential in this film because he is one of the silent characters.

I was quite nervous about this.

There is a track with Iqbal (Vicky's character in Raazi) that is sacred, but at the same time, very complicated.

Only two actors, who are very genuine about it, can pull it off.

So I was very happy to have him on board.

I don't think I would have been able to portray that character the way I did if it wasn't for him. 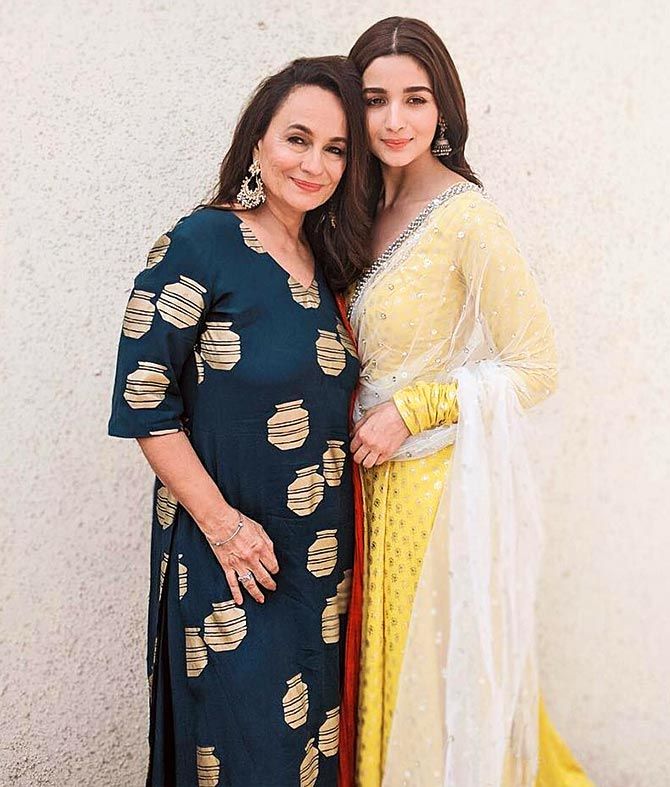 Were you nervous about shooting with your mother?

I was nervous, not because of what she'd think of me, but I was more nervous for her.

What if she doesn't perform well? Like how you are about your kid.

So I was like that, but I did not have anything to worry about.

When we started shooting, I realised she is way ahead of me in her professional attitude.

Do you think she hasn't got what she deserved?

I think what happened is that she had two daughters to look after.

When your daughters are growing up, it becomes very difficult for you to find work.

She has definitely not got her due, given the kind of actress she is.

But I also feel like this is her kind of time. She is doing Raazi, and another film, Yours Truly, which is supposed to be fantastic.

I have not seen it. My dad saw it and said it is outstanding.

He said, 'Your mother is better than you.'

I totally agree. I can say that without seeing (em>the film).

My mother wants to act. There was a misconception that she didn't want to. She is going to be busier than me.

You had to learn to shoot a gun for the film.

I got so scared of the gun when I was holding it!

And the people would be like, 'Madam, usme blank hai. Kuch nahi hoga.'

The only time I have screamed on set was when I was driving the Jonga (an army vehicle).

I wasn't comfortable driving the Jonga; it is a really big car. 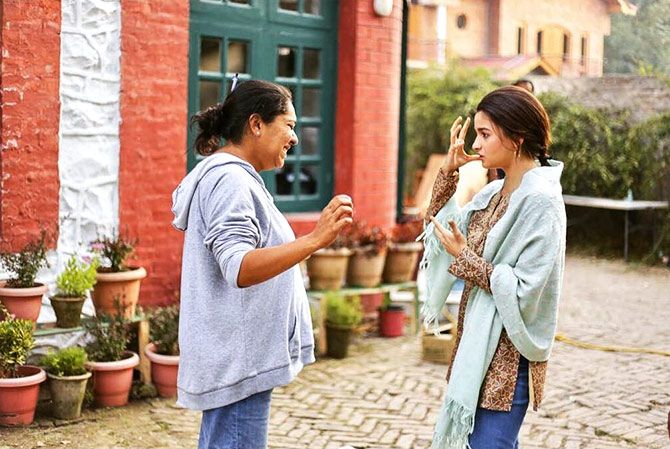 How was it working with Meghna Gulzar?

I like her films, especially Talvar. It left a big impact on me.

She is one of the most detailed directors I have worked with. That's why the world she creates is very real. 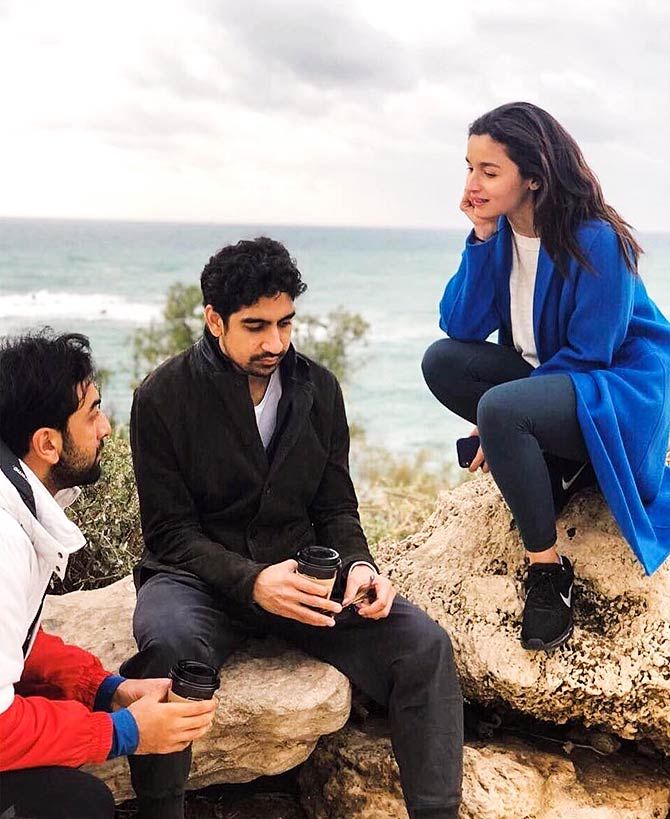 You have moved from Brahmastra to Gully Boy to Kalank. How do you switch characters?

I have finished Gully Boy, so now, it is just between Kalank and Brahmastra. I think that's where your directors matter a lot.

There are days when I forget my name! But luckily or unluckily, these two films are very different from each other.

I am shooting for Kalank for a month, then I will go back to Brahmastra for about a month.

Then I will return to Kalank, then back to Brahmastra, followed by Kalank.

How do you balance your personal and professional life?

There has to be a will and want to maintain a balance.

There are days when I feel terrible. I am tired and exhausted, but I make a plan with my friends and keep up to it because these moments with them are very important.

I don't get to see them often, but I have to let them know that they are as important to me, and a part of my life. Similarly, my family.

Of course, my work is very important. 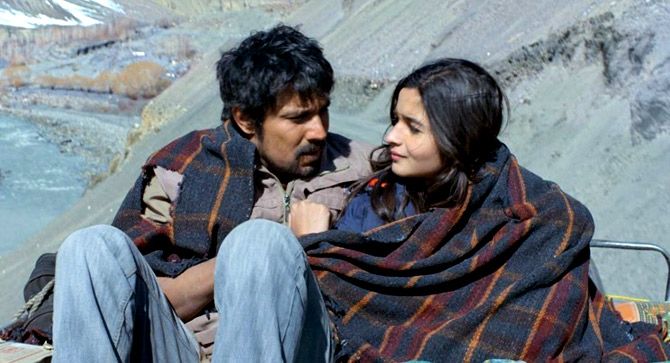 After Student Of The Year, you did Highway. Did you want to prove that there was more than glamour to you, or did it come to you?

Highway came to me.

I looked at it as a golden moment to showcase the fact that I am an actor as well.

But I also want to be at the top of the National Awards.

I want to have a balance.

It happened to me without me trying to make a point.

Would you credit Highway for the roles you get?

Absolutely. Every film that I have done has lent credit to me in some way.

Let me tell you, Student Of the Year gave me my biggest and youngest fan base.

You recently met director Ashwiny Iyer Tiwary. Is there a movie announcement?

I have met her for something I am quite interested in. Hopefully, it should work out.

I am really excited to work with her; she is a nice director. 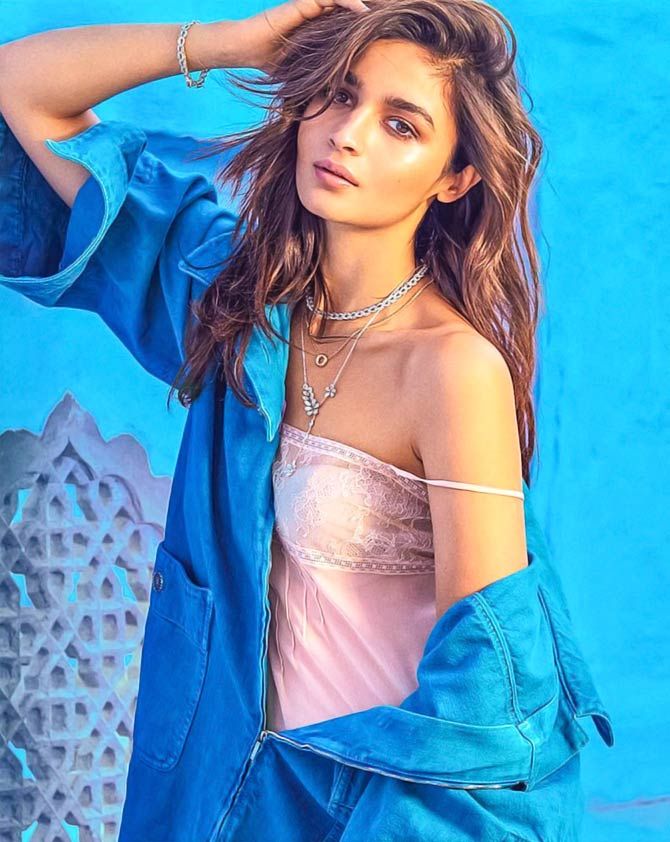 Pooja Bhatt said she wants to direct you.

When you work with family -- especially a family like mine because all of us our are so individualistic in our own ways, and have our own thoughts and opinions about life and cinema -- it is such an enriching experience!

I am waiting for to work with Pooja and hopefully, my dad can be part of that as well.

Will you be directed by your dad in Sadak 2?

It has been discussed many times. My father calls himself an extinct volcano. So I don't know, let's see. 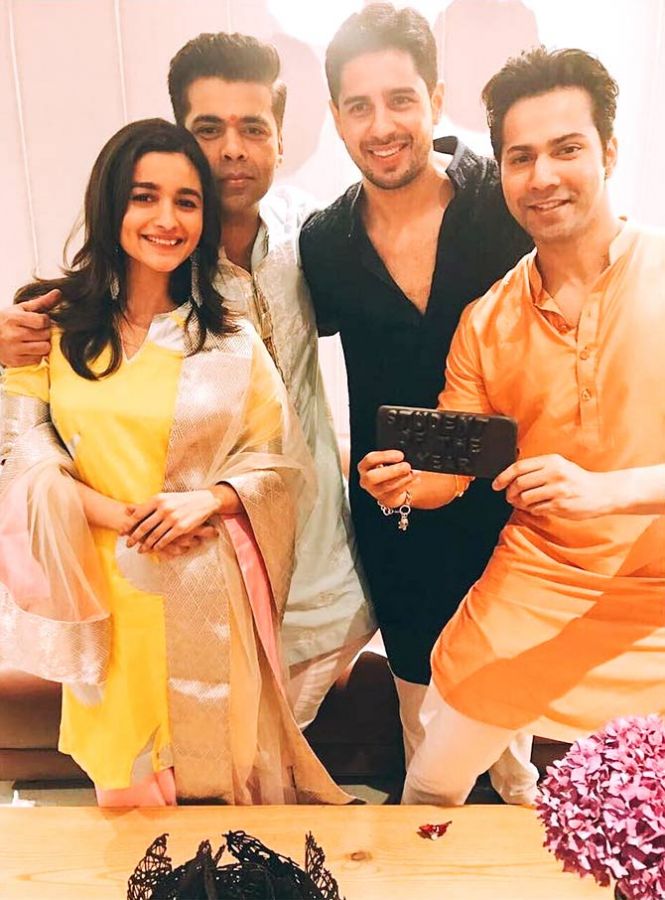 Will Varun Dhawan, Sidharth Malhotra and you make an appearance in Student Of The Year 2?

I don't know, you will have to ask Karan (Johar) because he is the creator of this university.

I am happy I am a part of the family.

Both of them are super bright and have an amazing presence. 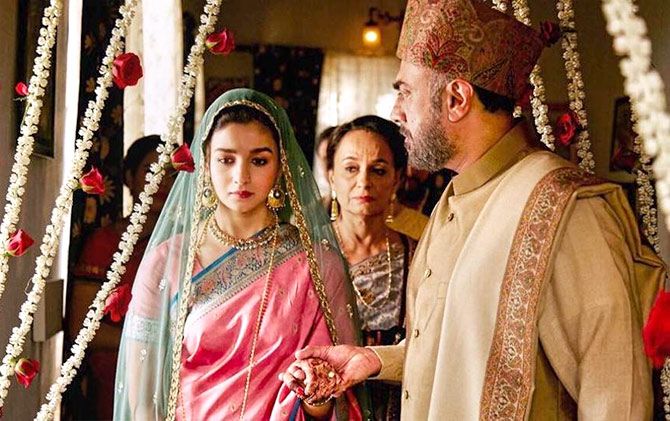 IMAGE: Alia Bhatt with Rajat Kapoor in the Dilbaro song in Raazi.

There are reports that you wore a bridal dress some 175 times in the song Dilbaro. How true is that?

What I meant was that I wore it many times.

It was like a bidaai song and we kept saying, 'yeh bidaai kab hoga?' It became a joke with us.

I used to put mehndi so on the last day, I saw the mehndi artist walking around and asked 'aaj bidaai hai?'

As a joke, I told my make-up artist's assistant that that day was the bidaai, and he started crying.

He didn't have the bidaai material and so he got stressed out.

So that was the highlight of the bidaai moment. It brought tears to people's eyes. 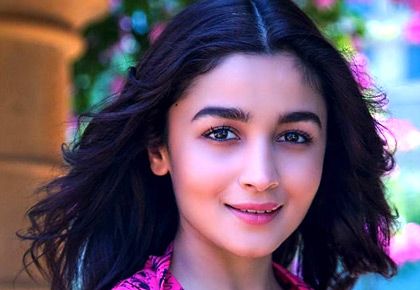