'Mulk questions the very principle, of good-Muslim exceptionalism.'
'That, of course, we adore Abdul Hamid, A P J Abdul Kalam and Bismillah Khan and if only more Muslims were like them.'
'Anubhav Sinha sticks his neck out to say that these are no exceptions.'
'Most Muslims are like them. It is the terrorists who are exceptions,' says Shekhar Gupta. 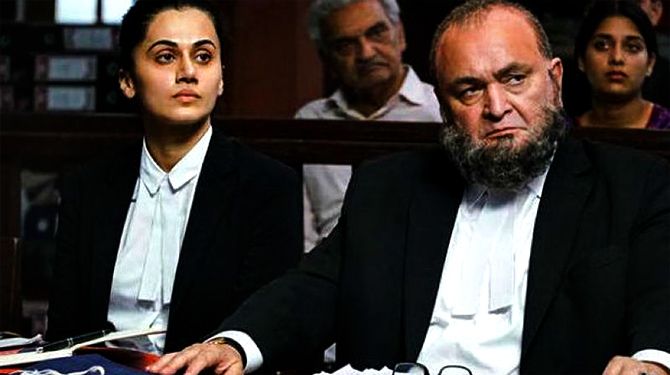 One out of seven Indians is a Muslim.

The 2021 Census will see their numbers cross 200 million.

Definitely, more than one out of seven of our best actors, music directors, lyricists, directors and technical artistes have always been Muslim.

Yet, Muslims are rarely portrayed in Hindi cinema.

And on the rare occasion when they do, they are either very good guys, or really bad ones.

It is as if Bollywood has concluded that a 'normal' Muslim, an equivalent of some Karan or Sameer or Raj or Rahul either doesn't exist, or isn't box office friendly.

That is why Anubhav Sinha's latest film, Mulk, is important. 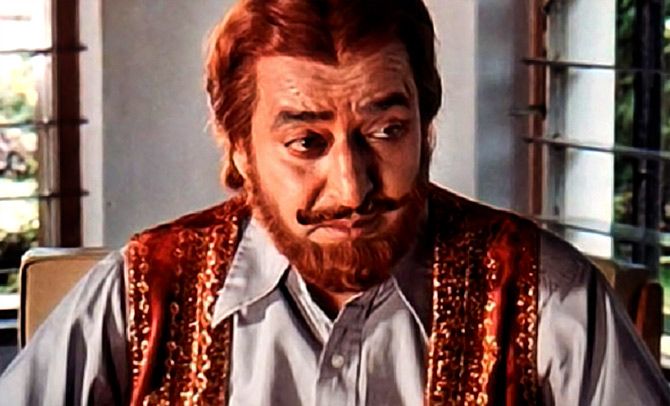 Cinema's portrayal of Muslims can be broadly divided into three phases.

From Independence until the late 1960s, it was mostly about the great romantic and powerful figures from history: Taj Mahal, Mughal-e-Azam, Razia Sultan.

There was a parallel genre of the 'Muslim social', with subtle romance, shayari and sort of middling feudal splendours, from Mere Mehboob to Pakeezah.

In the 'angry young man' 1970s, the Muslim was the big-hearted, honourable man who usually sacrificed his life for his Hindu buddy.

Until the late 1980s the Muslim, if featured, was almost always a good guy.

IMAGE: Sunny Deol with Tabu and Reema Sen in Jaal - The Trap.

It was followed by what we may call the Sunny Deol era, when communalism became fashionable, loaded slurs macho and the Muslim mostly a terrorist.

In one of these films, Jaal - The Trap when Deol, as the good guy, is teaching the bad guys (all Muslims) manners, chants of 'Om Namah Shivay' make the background score.

The bad guys' arrival duly has Arabian background music mixed with sounds of 'Allah', Tabu plays the patriotic hero's Muslim wife and, not surprisingly, betrays him.

I saw it many years ago when then editor M J Akbar said in a conversation to me that it was the most communally bigoted Hindi movie ever made.

And he was so right.

There were many others: Roja, Mission Kashmir, Fanaa, Fiza, Kurbaan and Vishwaroopam (though the hero there is a good Muslim taking on evil Muslim terrorists). 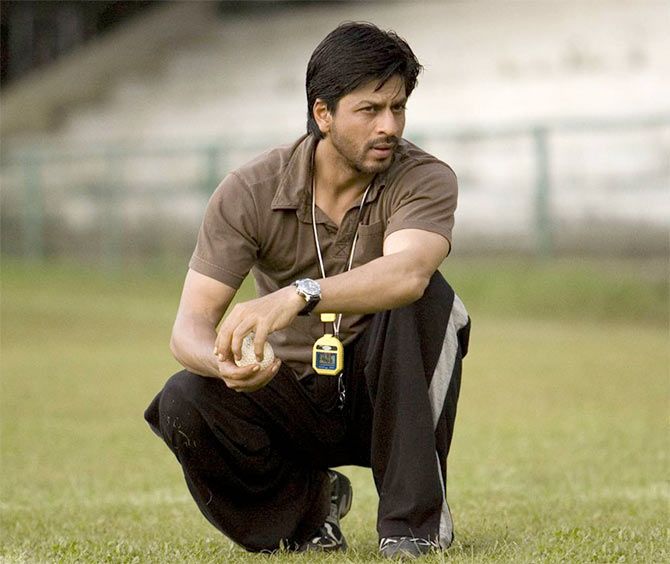 The rise of terrorism in Kashmir, Al Qaeda and the Indian Mujahideen had created the market for Islamophobia.

A 2011 study of 50 films with Muslim characters by Muhammad Ashraf Khan and Syeda Zuria Bokhari showed 65.2 per cent painted Muslims in a bad light, about 30 per cent were neutral and only 4.4 per cent positive.

It has only recently begun to be challenged.

Shah Rukh has also made a point by taking a Muslim name in a succession of movies, beginning with Chak De! India.

Anubhav Sinha's Mulk is remarkable in that it pictures an ordinary Muslim family, though with a half-estranged Hindu daughter-in-law (Taapsee Pannu).

Its Muslims are good and patriotic as well as bad and terrorist.

It even brings you the complexity of a Muslim on the good side literally playing bad cop to his community as the overzealous, trigger-happy chief of Varanasi's anti-terror squad, played brilliantly by Rajat Kapoor, who says much with his gait, eyes, the virtuoso body language package while speaking few words.

There is also a terrorist son killed in an encounter after a bomb planted by him blew up a bus killing 16, including, we are reminded, three Muslims.

Just about half an hour into the film, you might also get a mixed feeling -- fear, insecurity, the many conflicting dilemmas, aspirations and frustrations assailing an Indian Muslim's mind today.

And if I were a young Muslim, like lawyer Murad Ali Mohammed's (Rishi Kapoor) terrorist nephew Shahid (Prateik Babbar), there are conflicting pressures and vulnerabilities: Joblessness, the propaganda that Muslims are victimised and why aren't you fighting back.

Also, love of the family, country and the faith.

At halfway point, you are frozen with fear.

You might even wonder: Is some of this going on in the minds of one out of seven, nearly 200 million, of my countrymen? And if so, why haven't we gone up in flames yet?

It isn't only because there are some super-patriotic Muslims like the terrorist's family which refuses to accept his body for burial.

In fact, the film questions that very principle, of good-Muslim exceptionalism.

That, of course, we adore Havildar Abdul Hamid, A P J Abdul Kalam and Varanasi's own Ustad Bismillah Khan and if only more Muslims were like them.

Anubhav Sinha sticks his neck and all his vitals out to say that these are no exceptions.

Most Muslims are like them. It is the terrorists who are exceptions.

In more than 20 years now, a Hindi film has inspired this column only thrice.

Each time, it has been because the film spotted a trend or a change that pundits and politicians hadn't, or delved into an area we find so uncomfortable we'd rather avoid.

The first was Farhan Akhtar's 2001 Dil Chahta Hai, as our cinema's first unqualified, non-judgemental of wealth and a rich lifestyle.

Remember, this was when Anil Ambani was being voted the top youth icon, ahead of Sachin Tendulkar.

The second, Neeraj Ghaywan's Masaan in 2015 explored the social and personal impact of the change brought about by that relentless growth.

It also locked horns with caste, which we usually hide from.

Like Mulk, and maybe not coincidentally, it was also set in Varanasi. 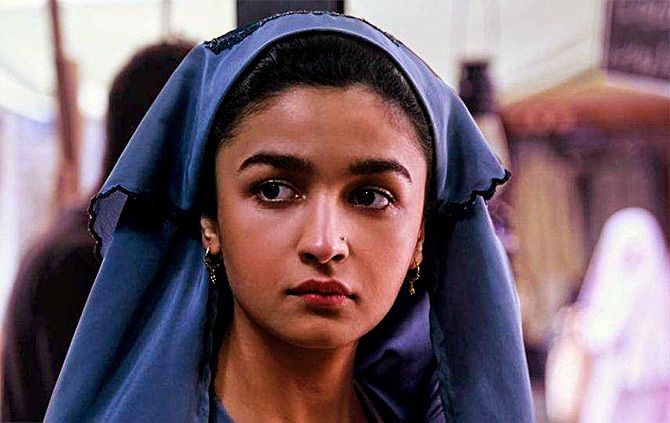 Sinha's Mulk makes the cut because it brings to you the challenges of an ordinary Muslim family in modern India, which, again, like caste, we'd rather hide from.

How effective he has been is evident from the vicious trolling he has received.

Why any patriotic Indian would be embarrassed by this film beats me.

You should be especially proud that India has the confidence to produce and celebrate films like Meghna Gulzar's Raazi, portraying a Pakistani army family as good, decent people and now Mulk.

Is it because in the current, Sunny Deol-ised environment our convenient default view of a Muslim is that of a traitor unless proven otherwise?

This is why you should watch this film.

Warning: It will hit you in the gut and it will hurt.

In 2005, in the same Varanasi, I received a wonderful lesson from one of its most famous Muslim geniuses.

I asked Ustad Bismillah Khan in my Walk The Talk interview why he didn't go to Pakistan in 1947 when Jinnah had personally asked him.

"Kaise jaate hum? Wahan hamaara Banaras hai kya?" he asked, and then went on to say how he could not play his favourite Raag Bhairavi without Lord Shiva's blessings and because he was not allowed inside the temple, he walked behind it and touched from the outside the wall against which the deity rested.

Play those clips of our first Independence Day in Parliament.

The man playing the shehnai in celebration is Bismillah Khan who just refused to go to Pakistan.

As we entered the week of our 72nd Independence Day, watch Mulk for a similar wake-up call.

Watch Rishi Kapoor as Murad Ali Mohammed tell the court: 'If you can't tell the difference between my beard and Osama bin Laden's, it's your problem. You can't take away my right to have one and fulfill my religious duty (sunnat).'