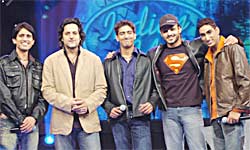 After what happened last week in Indian Idol [Images], an invitation to the shooting of the next round was tempting.

Defying soaring temperatures in Mumbai, a huge crowd had gathered at the studio in suburban Andheri.

Amey Date: People expected me to be the next Indian Idol

The tension in the air was evident with enhanced security arrangements (partly due to Vivek Oberoi [Images] and Fardeen Khan [Images] who were special judges for the episode) and the presence of two executives from Fremantel Media � the producers of the show American Idol � and licensors of the format to Sony. Fremantel officials were there to put their stamp of approval on the format and clear doubts, if any, related to the vote-counting process.

After a long wait, we were allowed inside the airconditioned studio -- nothing short of heaven, by that point! The set was the same, the contestants were the same, as were the organizers, but something was different. After last week's walkout, there was much speculation about whether the judges would be present. Much to everyone's relief, two of them were. Farah Khan [Images], however, was missing.

Before eyebrows were raised, Mini Mathur announced that Farah couldn't make it due to personal reasons.

That there was still tension in the atmosphere about Amey Date's exit was evident in the 15-minute discussion between the judges and audience before the actual show began. The format, counting, Date's exit � everything was discussed in this open house. Sonu Nigam [Images] made an interesting comment about the role of judges in the format, "People keep complaining about the role of judges. I feel their role should be limited to selecting the top 30 contestants. After that, the common man should take over in selecting the voice he or she would like to hear. Our role � once the top 30 have been selected � is limited to making the audience aware of what is good and bad." 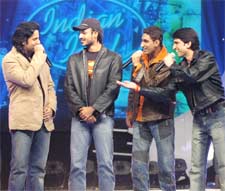 Sonu also clarified that there was no problem with the tabulation of votes as it is done by officials of Fremantel Media without any involvement of people from Sony or the judges themselves. "We just get the results and, let me assure you, the entire process is error-free." Such a comment was necessary, given the controversy over lack of transparency in the show.

Anu Malik [Images] had a very emotional clarification to make: "We artistes are very emotional by nature. The reaction and walkout was an emotional outburst because of the shock we received from the result. We couldn't believe Amey had been voted out of the contest. But, let me assure you, there is nothing wrong with the format." He went on, "A lot of people are blaming Anuj for this. But, let me tell you, that boy is not at fault. Please don't blame him. We would have done the same thing if it was anyone else � our walkout was not because of Anuj."

Vivek Oberoi also added his bit, "The fact that we are all discussing Amey Date makes him a winner. In my opinion, all who make it to the top 10 or 5 of such reality shows are winners." Fardeen Khan agreed. "In my dictionary, the word 'loser' doesn't exist. Everyone who has reached this stage is a winner. They have crossed a number of barriers and achieved a lot."

A very interesting comment was made by an NRI from Washington D.C., who came to watch the shooting during her trip to India, "I feel the format needs to be tailored for India. Just because it has worked in the US and other countries doesn't necessarily qualify it to be the right thing in India. In the US, people more often than not vote for a contestant depending on which state he or she is from, without considering ability. I don't think it would be the right thing to promote such regionalism in our country." The fact that the audience agreed with what she said was evident in the applause to her statement. As Vivek Oberoi said after the show, "Arts is perhaps the only medium where regionalism has not yet struck. Let us keep it at a safe distance from all these things."

Once the judges were in place and the discussion with the audience complete, the contest started with the Public Choice round. Sandeep Acharya � fresh out of the overpowering shadow of Udit Narayan � was the first one to sing. He sang yet another non-Udit number this time and did it really well. The judges were all praise, especially Vivek Oberoi, who said it was one of his favourite songs.

Anuj was next. "I was standing like a rock last week � stunned by everything happening. What made me feel worse was when I went to play Holi the next day. People were pointing fingers and blaming me for Amey's exit," he said, tears rolling down his cheeks. The fact that Anuj had done his homework well could be seen in the way he sang. Making a conscious effort to move away from the folk-based numbers he has always excelled at, he sang a popular, passionate number composed by Anu Malik.

What will Anuj do if he wins the contest? "I come from a place where there is no good music school. If I win the contest, I will open a music school to help the children there."

Karunya � identified by most to be the next Indian Idol � was the last performer of the round. He sang very well, as usual. But Anu Malik had something to say, "When people see you, they feel you are a simple person who just comes on stage, sings and goes away. But, as a music composer, I understand how clever you are as a singer. Today, when you started, you were shaky. The moment you realized that, you started adding your own harkats to the song to impress us and the audience and, at the end, gave us a good package. This is something only an extremely confident and good singer can do."

The 'good singer', however, has taken a big risk by opting out of his engineering course to participate here. "I come from a place where education is of prime importance. Leaving my studies halfway was not an easy decision. But I took that and am trying my best to achieve the success I wanted to."

Watch the show this evening at 9 pm on Sony Entertainment Television.