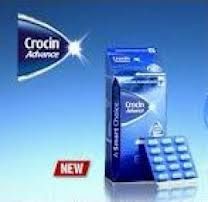 GlaxoSmithKline’s fast-relief analgesic, Crocin Advance, might cause pain to the company.

Rejecting its plea to exempt the medicine from price control, the National Pharmaceutical Pricing Authority is instead set to penalise GSK Consumer Healthcare for overcharging consumers by selling the drug at over double its maximum retail price as fixed by the regulator, official sources said.

The NPPA letter was issued to GSK on Wednesday.

The letter, reviewed by Business Standard, was also sent to Remidex Pharma, which manufactures Crocin Advance for GSK Consumer Healthcare in India.

The regulator plans to issue an overcharging notice to GSK Consumer Healthcare within the next few days and is likely to impose a hefty penalty on the company.

According to sources, NPPA had constituted an experts’ panel headed by K K Bhutani, director of the National Institute of Pharmaceutical Education and Research.

The committee also had doctors from Ram Manohar Lohia Hospital and the All India Institute of Medical Sciences in Delhi. The panel examined the application and rejected it.

GSK said it had yet to get official word from NPPA.

“We have been and will continue to be compliant with the law of the land,” the company said. GSK had launched Crocin Advance in India in 2011.

It had claimed the product was a ‘new drug’, with optizorb technology which releases its medicine up to five times faster than ordinary paracetamol tablets, providing fast relief.

On this basis, the company sought exemption from price control, while also contending Crocin Advance was developed through indigenous research and development.

Under para 32 (iii) of the Drug Price Control Order, 2013, a ‘new drug’ developed through indigenous R&D can be kept out of price control for five years.

According to NPPA’s letter, the product does not qualify for the exemption because “the formula and process technology were transferred from R&D Parsippany (in New Jersey, USA) to R&D India in May 2006” and the R&D centre in India is also not approved by the department of scientific and industrial research, as is required under the DPCO.

According to an official source, the company is planning to gradually stop selling the conventional Crocin brand while promoting the other brands, including Crocin Advance.

On Thursday, shares of GlaxoSmithKline Consumer Healthcare ended at Rs 4,286.10 on the BSE exchange, down 0.3 per cent from Wednesday’s close.