A Fashion Week's most memorable venues

With pandemic regulations being relaxed, fashion weeks are moving away from the confines of a fixed venue. IMAGE: As models walk the runway during the BONDI BORN show, one can view the spectacular Sydney Opera House.
The runway was just a few steps away from the water's edge.
Photograph: Mark Metcalfe/Getty Images IMAGE: The Sennheiser Sydney Store doubled up as a ramp for models during the Karla Spetic show.
Photograph: Stefan Gosatti/Getty Images IMAGE: You can call this the fashion show with a view.
A model walks the runway during the NON + show at Icebergs Dining Room and Bar.
Photograph: James Gourley/Getty Images IMAGE: This swimming pool at Villa Orme makes the perfect backdrop for the We Are Kindred show.
The blue water added an element of contrast to the otherwise neutral garments.
Photograph: Brendon Thorne/Getty Images 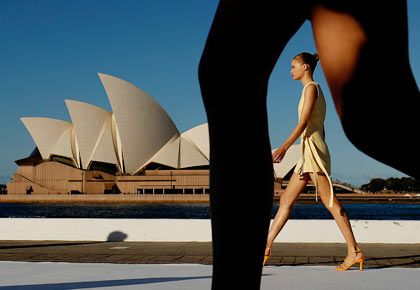