Forbes magazine has released its 30 Under 30 list for 2018, and it features 600 young and rising stars across 20 industries.

'What never grows old? The burning desire of youth to reinvent the world,' Forbes writes in the introduction. 'That ambition and impatience is on full display in our 2018 edition.'

The competition to feature on the list gets fiercer every year. This year, the selectors received 15,000+ nominations for just 600 spots. As Forbes likes to point out, the class of 30 Under 30 is harder to get into than America's 'two most selective colleges, Stanford and Harvard University.'

Meet the rising Indian/Indian-origin entrepreneurs who made the cut: 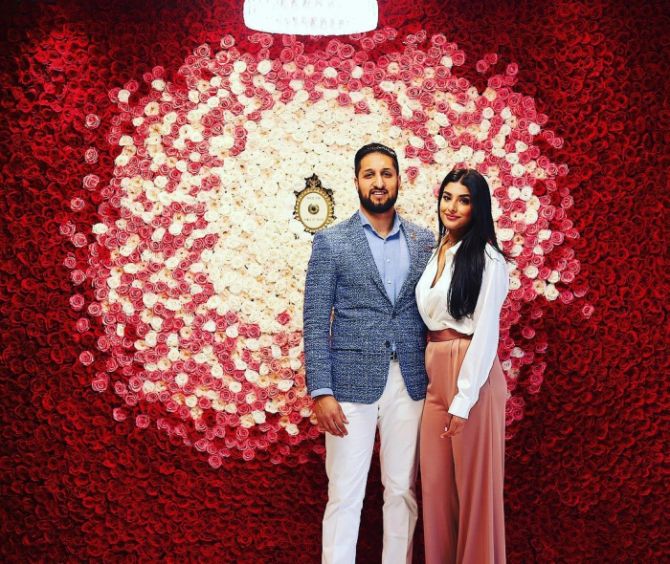 Seema Bansal, 26, and Sunny Chadha, 28, are the 'featured' names -- the only Indian-origin entrepreneurs who made that cut-- in the Retail and e-commerce category of the Forbes 30 Under 30 Class of 2018.
Photograph: @venusetfleur/Instagram.

The Venus ET Fleur co-founders have technology to ensure that roses last a full year in full bloom without water.

The likes of reality TV stars Khloe and Kourtney Kardashian have taken note of them.

Forbes notes, 'Venus ET Fleur is profitable, and revenue, estimated at $7.5 million, has grown 226 per cent in the past year. By the end of the year, Bansal and Chadha plan to open their second distribution center in Los Angeles.'

Along with Will Wei Song, these two co-founded Drive.ai.

Forbes writes, 'With $77 million in funding, this group of former members of the Stanford University Artificial Intelligence Lab is building autonomous car tech primarily based on deep learning. Drive.ai is one of the first companies to deploy self-driving cars on the public roads in California.'

He co-founded the Chattanooga-based venture capital firm Dynamo in December 2015 with Ted Alling, Barry Large and Allan Davis. So far, the company has remained focused on startups in the logistics technology space.

He founded Gauss Surgical. Driving the company's growth is the app Sathish developed to monitor blood loss in the OR. According to Forbes, 'It's been used for thousands of patients to make childbirth safer.'

The company has raised $24.6 million.

He co-founded Care/of, a direct-to-consumer ecommerce brand that delivers personalized vitamin packs to consumers via a monthly subscription. As Forbes points out, the company is growing fast: It has raised $15 million to date, including a $12 million Series A in 2017, and is doubling revenues every two months.'

'Through a blend of technology and near-peer mentoring, CollegeVine is a virtual platform that helps students navigate the complex college admissions process.'

He co-founded the health and medical education company Osmosis Osmosis, which produces videos on topics ranging from aneurysms to Zika. They have been viewed more than 25 million time since January 2016 in over 200 countries.

Osmosis also offers a personalized platform for those training to be health professional. Gaglani, who has an MBA from Harvard, is simultaneously working on a MD from Johns Hopkins University School of Medicine.

Singh co-founded and co-developed Gradescope, an app that grades exams and provides teachers and students with instant feedback.

Forbes notes, 'Some 10,000 instructors and 300,000 students at 450 schools worldwide, including MIT and Imperial College London, have used Gradescope to pore over 25 million pages of work. Last year, Singh and his three cofounders raised $2.5 million in funding.'

The two-time founder is now partner at Sinewave Ventures He has backed more than 30 companies, predominantly focused on enterprise tech.

He is the founder of Nagpal Restaurant Group, which owns and operates two restaurants in New York's Westchester county.

But the more meaningful work for him, he told Forbes, is teaching a cooking class for the immigrant children in his community: 'He hopes his business serves as a beacon of hope for anyone who feels like they don't have a chance at one day finding success.'

She co-founded HubHaus with Kerry Jones in 2016 to make it easy for professionals to find community in shared housing. The company gains from Merchant's experience after she dropped out of medical school: she moved to Silicon Valley to found her first startup and struggled to find affordable housing.

The company has already raised about $1.5 million.

He co-founded LoftSmart with Sam Bernstein. Their company connects student renters to apartment buildings looking to fill leases. The company has processed millions in lease transactions and raised $5 million from investors.

The company has raised about $2 million in venture funding.

Along with co-founder WeiHua Li, Saigal 'decided to spin-out MIT's App Inventor tool, the drag-and-drop service for building your own app had already reached 4.3 million registered users who made more than 13 million apps.'

They are the co-founders of Accern Corporation, a real-time web surveillance platform that monitors 300 million websites, 'alerting investors on actionable stories about US public companies.'

Along with Joe Thomas, they co-founded Loom, a video communication platform that enables teams to quickly record, edit and share complex information. Loom is already used by more than 250,000 employees at companies like Airbnb, and Dropbox.

Along with cofounders Eric Conner, Dan Levenson and Alex Villa, Bhat created Healthify to connect Medicaid recipients in the US to social services. About 4 million people have benefited from Healthify and the company has raised $9.6 million to date.

She is the co-founder of Lumme where she developed software for smokers who want to quit. Lumme has raised $1.7 million in non-dilutive funding, Forbes reports.

He co-founded Oncolinx, which is testing antibodies aimed at activating the immune system. Clinical trials are set to begin in 2018.

They created Chakr Innovation, which has the first system to capture harmful emissions from diesel generators.

He is the founder of Pluto AI, a startup that has built an intelligence platform for water facilities to reduce energy consumption, predict asset performance, and minimize operating costs. It raised $2.1 million in seed funding.

Forbes adds, 'He is an Artificial Intelligence researcher, a published author of 8 books, and a TEDx speaker.'

The company works on robots integrated with cameras and radar systems for long-haul driverless trucks. The company, where Seltz-Axmacher is CEO and Tiwari is CTO, has raised $5.1 million.

He co-founded Upsolve to give low-income Americans the means to get a fresh start through bankruptcy without having to hire a lawyer.

Forbes adds, 'Together with lawyer Jonathan Petts and programmer Kevin Moore, the Harvard student built an online tool that eases users through the process of inputting the financial information necessary to create a bankruptcy filing.'