A date with nature 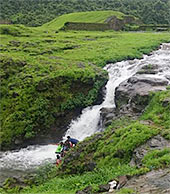 A temple on the mountain top. A lake and a waterfall. All in one day!.
Rediff.com's Divya Nair recently trekked to Sondewadi, Maharashtra. This is what she discovered: IMAGE: The group at Sondewadi, the base of the trek. Photograph: Reuben NV/Rediff.com

Sondai is a small fort, more of an uninhabited temple, near Sondewadi, a village near Karjat, Maharashtra.

It gets its name from Goddess Sondai whose shrine is atop the mountain.

On a cloudy Saturday morning, 13 of us, including four children, set forth on the trek.

We took a Central Railway train and reached Karjat station at 7 am and hired two six seater autorickshaws to Sondewadi.

After breakfast, we reached Sondewadi at 8.30 am.

A member of our team had brought his car, so we dumped most of our stuff (extra clothes, umbrellas etc) in the car and parked it in the village.

The aim was to travel light.

Since it was raining, we chose to walk and get wet in our monsoon shoes, rather than in our sports shoes.

We carried some lunch and two bottles of water each, as there would be no shops uphill. 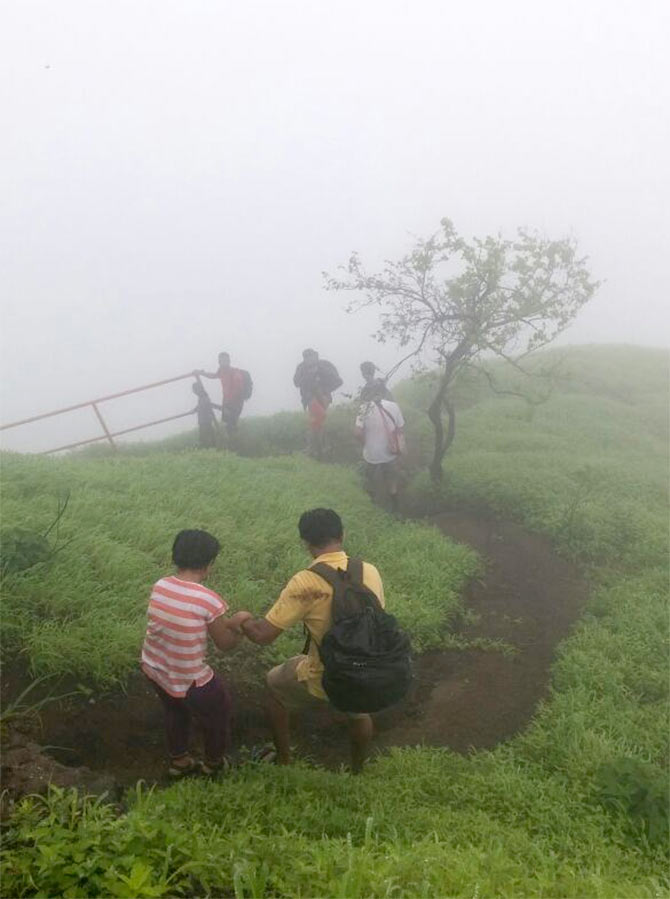 IMAGE: The downward descent into the clouds. Photograph: Divya Nair/Rediff.com

The trek uphill was easy-to-moderately difficult.

If you are trekking for the first time, you will need an expert around. My colleague Reuben was the expert on this trek. An avid trekker, he had been there with friends a week earlier. 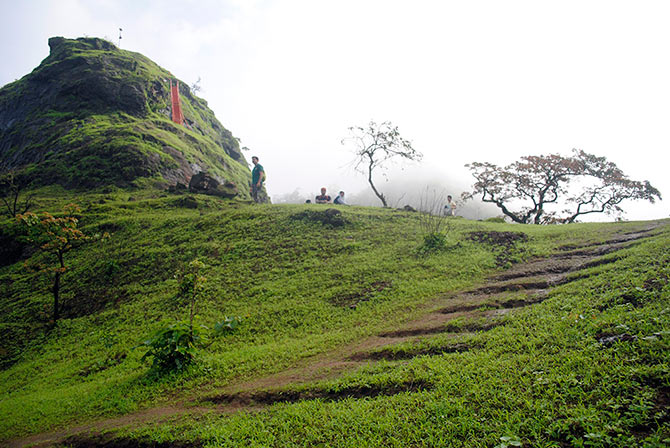 IMAGE: In the absence of clouds, the top of the mountain is clearly visible. Photograph: Reuben NV/Rediff.com

An orange coloured metal ladder leads you to the top.

We arrived at the top by 10 am and halted for half an hour hoping for the clouds to clear. No sooner had the kids opened the packets of chips, we heard strange noises.

Half a dozen monkeys advanced towards us.

Rajesh, one of the trek members, used his whistle to scare the simians away.

The moss on the rocks and wet mud made the downward descent slippery in most places.

Sometimes, we'd sit down and slide :) Our next stop was a lake near Vavarle village for which we had to walk for nearly two hours.

The path was densely covered with trees and shrubs. And plenty of mosquitoes and insects too. 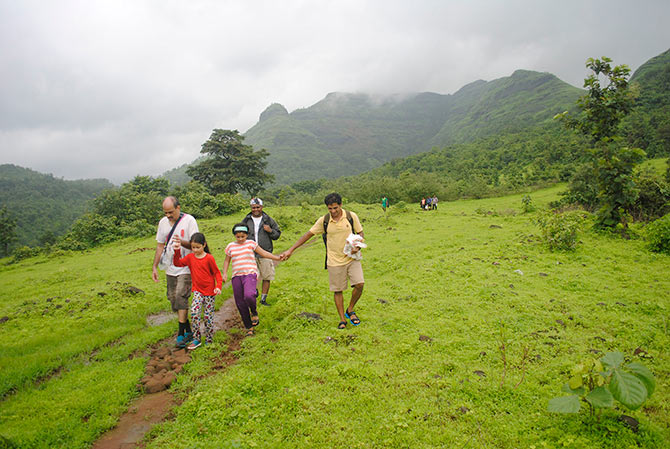 IMAGE: The kids looked forward to playing in the lake. Photograph: Reuben NV/Rediff.com

Throughout the trek, we spotted rectangular pits which collected water.

This was either to harvest rainwater or a way to prevent desilting. When we reached the lake at 1.30 pm, we were disappointed to see a group of youngsters having a lunch and booze party.

Used plates and bottles were scattered near the lake.

A week before, Reuben said, the area was clean. I wanted to request the group not to litter, but Reuben asked me not to take the lead because they were likely drunk.

Salil, one of the trek members, went ahead and requested the group not to litter and fortunately, they heard us out. They agreed to remove the used plates and bottles.

All of us then took a dip in the lake, forgetting how tired we were from the long walk. 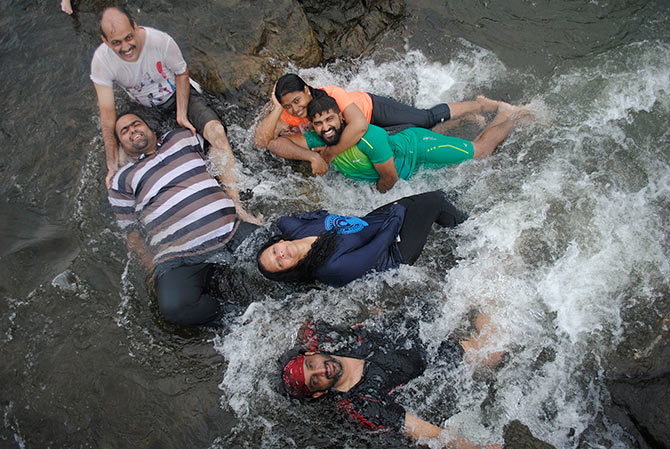 IMAGE: The group soaks in the lake. Photograph: Reuben NV/Rediff.com

There was a waterfall near the lake.

Reuben warned us not to spend much time in the waterfall as the force of the water was strong and it would tire us out in seconds.

We took a quick dip and Reuben was right about getting tired in a jiffy. 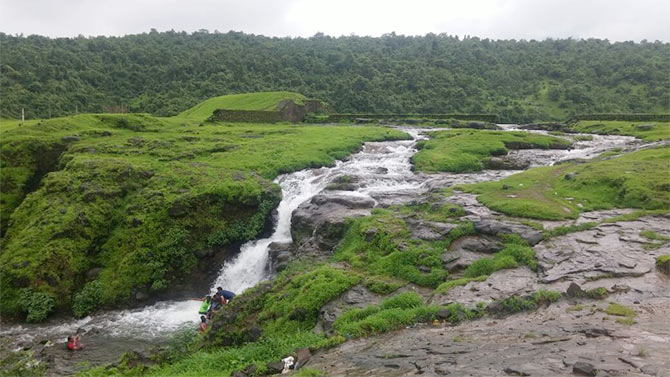 IMAGE: A view of the waterfall. Photograph: Divya Nair/Rediff.com

We took the 'tumtum' (the six seater rickshaw) back to the station. By the time we reached Karjat, our bodies were tired, but memories of the picturesque views linger on.

How to reach there

Take a Central Railway train to Karjat. Alight from the eastern end and hire a six seater to reach Sondewadi village.

Write to us about your favourite monsoon trek with these details:

Please mail your monsoon trek photos and stories to getahead@rediff.co.in along with your NAME, AGE and the place where you LIVE.

You can share your pictures with us too! Do include interesting information about where you clicked the photograph and what makes it special.

We will publish select treks on Rediff.com and India Abroad.