As part of a relationship series to ensure you're lucky in love this year, we bring you an excerpt from How to Avoid Falling in Love with a Jerk by John Van Epp, PhD. The author conducts worldwide seminars on marriage and relationships.

Here are two sections from Chapter 13, How to Have Great Sex.

Sex is More than Physical

The problem with the view that sex can be a physical act without any other ramifications is that it has no supporting evidence either in anecdotal surveys or scientific research. In fact, both bodies of evidence consistently tell us just the opposite: sex is always relational. Even if you have convinced yourself that you can have sexual relations with someone and it means nothing, it still is relational. This is true for both women and men, debunking the stereotype that men can have sex with no emotional or relational consequences.

The primary reason why sex is always relational is because you cannot separate your body from the rest of who you are; therefore, what your body does, you do. Sex and self are inextricably linked, and during a sexual encounter something happens that is more than just a physical act.

Tiffany became involved in a casual sex relationship with Derrick. Her friends warned her that she was setting herself up for an emotional disaster. Of course, she disagreed.

She and Derrick had been engaging in sex without a relationship for about two months, when she began noticing a trend. Derrick would not return her phone calls and would only call her when he wanted to have sex. When he saw her in public, he would ignore her. On top of all that, he was never available when she tried to reach him, although whenever he needed anything, she was there for him.

Tiffany's friends could see right through him. They argued that he was just using her. Tiffany retorted that she was using him, that she was in it just for the sex, and that he couldn't hurt her feelings because her feelings weren't involved. Then she complained about the way he acted when she saw him at a party. When her friends tried to point out the way her reaction revealed her emotional investment, she seemed to be completely unable to understand what they were explaining.

Tiffany's rendezvous with Derrick lasted close to a year. Her complaints to her friends were always the same: "Why doesn't he call?" "Why can't he just invite me out with him?" Why does he only want to see me when he wants sex?" The advice from her friends also was always the same: "You are doing more than an exercise routine when you have sex with Derrick -- you want the guy to like you because you like the guy."

Finally, Tiffany and Derrick had a falling out and stopped meeting altogether. Although it is two years later, Tiffany still talks about her anger toward Derrick. She still resents his lack of attention and interest in her, as well as the vulnerable feeling she had when she saw him outside of their intimate meetings.

Sex intensifies your experience of closeness, whether in a committed relationship or not. Sex cannot be severed from emotional involvement. While Tiffany may argue that her sexual experiences with Derrick, or anyone else, did not affect her thoughts and feelings for Derrick, evidence from research suggests otherwise.

Some researchers have studied the changes, if any, that occur with the first act of intercourse in a relationship with a partner. What they found was that one act of sex ignited a chain reaction of several other relationship activities. Because of this domino effect, they referred to the first sexual encounter in a relationship as the 'passion turning point'.

First, this 'turning point' changed the overall feelings and activities in a relationship. For instance, when couples were interviewed and asked about major turning points in their relationship, the first sexual act together was the most frequently remembered. It was also among the most commonly commemorated by couples in their yearly schedule.

For some of you, the following may sound very familiar: the singles in this national study talked about additional changes that accompanied the time of their first sexual act in their relationships. They described several relationship activities that launched after they had sex for the first time together, significantly increasing mixed feelings and thoughts about their relationship.

One of the activities was a stronger desire to open up and feel closer. At the same time, this was countered by an equally strong feeling of being more vulnerable to getting hurt by the partner, and an apprehension about letting down your guard. This feeling of vulnerability was even more heightened when the first sex act occurred before certain shows of love and desire had been expressed. It made the couples wonder what was expected of them now in the relationship. This uneasiness and vulnerability, which was caused from the increased inclination to share more of oneself with a partner while feeling unsure of whether the partner can be trusted, fits with what we have seen in the RAM's portrayal of emotional unsafe relationships (see Figures 13.1 and 13.2). 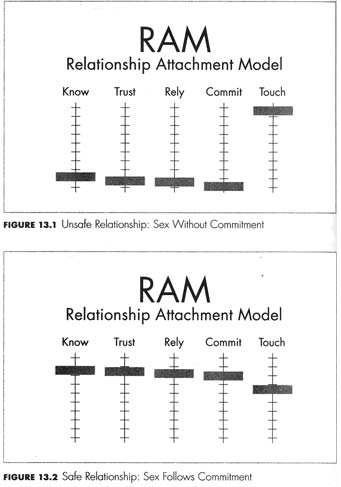 Whenever you have allowed a relationship dynamic to become significantly more developed than a previous dynamic, as represented in the RAM, then you put yourself at risk. Whatever is true for you when you place more trust in a person than what you know about that person, depend on a partner much more than you trust that person, or become overly committed to someone who consistently isn't there for you (reliance) or hasn't earned your respect (trust) is equally true when your sexual involvement is greater than any of the relationship dynamics that precede it in the RAM, and your risk of getting emotionally burned is significantly increased.

Unsafe sex has been discussed more than ever in the last several decades, especially since the drive to educate the public about AIDS and venereal diseases. In additional to these obvious physical risks, there are other risks. First, if you are a woman, you place yourself at risk of being raped. Date rapes make up 78 percent of the reported rapes. Date rape is an extreme violation of trust that never should be excused or justified for any reason. Yet there are ways you can put yourself in sexually vulnerable situations with someone who has not earned your trust. It is dangerous to let down your guard with a partner whom you are familiar with but have not known long enough to prove his or her character. We all can admit that it is easy to fill in the gaps of our trust-pictures when we know someone just a little, only to realize later that this person is grossly different than what we had at first imagined.

Excerpted from How to Avoid Falling in Love with a Jerk (Rs 299) by John Van Epp with the permission of publishers Tata McGraw-Hill.

Also read:
Ladies, make yourself irresistible to men!
Passion: The solution to a boring sex life
Are you a dominating, controlling partner?