Purnendu Maji and Srinivas Bhogle pick the 50 Most Valuable Players in IPL 2022 after Game 55. 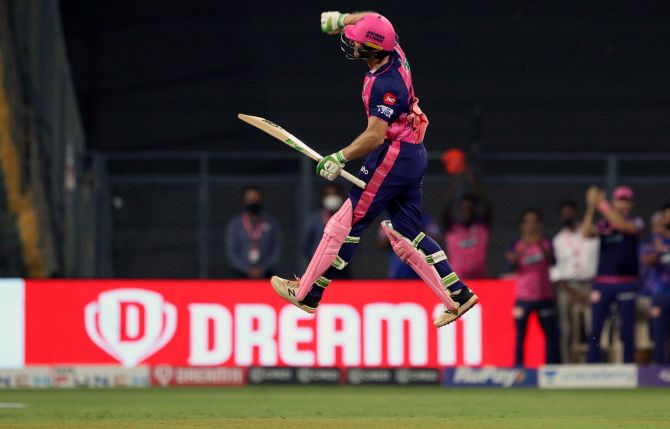 IMAGE: Rajasthan Royals opener Jos Buttler is the leading run-getter in IPL 2022, with 618 runs from 11 games, with three centuries and as many fifties. Photograph: BCCI

IPL 2022 is going on and on. With eight teams, the IPL league phase would have almost ended by now, but with the inclusion of two new teams this season, we still have 15 league matches to go, and many of these matches are likely to be of little consequence.

Jos Buttler too is going on and on, with a top MVPI of 651. Although the MVPI is constructed to be a 'runs equivalent' of batting, bowling and fielding performance, the England run machine is up there almost entirely due to his magical batting (618 runs so far).

Andre Russell (MVPI: 534) is also proving to be a super-performer (and, surprisingly, still super-fit!), although that's unlikely to help KKR's cause because most of his team-mates aren't performing. The only other KKR players in the top 50 are: Umesh Yadav (at 8th place with an MVPI of 416), Sunil Narine (13; 380) and Shreyas Iyer (25; 336).

It is curious that KKR has both the Australia captains -- Pat Cummins (Test) and Aaron Finch (ODIs and T20Is) -- but neither is being impactful.

This analysis is based on the first 55 matches of the current IPL, and updated on the morning of May 9, 2022. We have assumed the par score to be 180 and every wicket to be worth 18 'runs'.