There are some batsmen reputed, respected and feared for what they are: Destructive!
They are the game-changers. It is not bats, but bludgeons that they wield.
Haresh Pandya picks the swashbucklers you must watch out for at the World Twenty20.

Fasten your seat belts, folks, and get ready for some high voltage thrills as the World Twenty20 gets underway.

T20 cricket is a batsman's game, despite the curious success of bowlers like Jasprit Bumrah, Ashish Nehra, Ravichandran Ashwin and others.

When a batsman is on song, hitting fours and sixes, making the fielders hop and dance to the tune of his stroke-play, there are wild scenes in the stands as spectators enjoy every moment of the action out there in the middle.

This World Twenty20 won't be short of attacking batsmen. Most teams are packed with powerful strikers of the ball.

Some of them are not regular members of their country's Test side, but are indispensable when it comes to Twenty20s. Glenn Maxwell and Suresh Raina, for instance.

The very nature of Twenty20 cricket is such that any batsman can excel at any time depending on the situation the team finds itself in. Even non-specialists are sometimes expected to bat not only a bit, but brutally.

There are some batsmen reputed, respected and feared for what they are: Destructive!

They are the game-changers. It is not bats, but bludgeons that they wield. 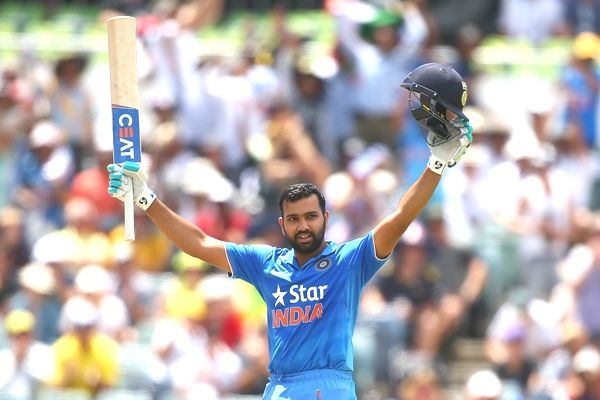 Already one of the world's more elegant and cleaner strikers of the ball, Rohit may be unpredictable, even enigmatic.

This unpredictability makes him a dangerous customer for opponents, who are as much in awe of his powerful shots as in his insatiable hunger for big scores.

Rival teams know if they don't get rid of him early, he can be unstoppable. He loves to dominate the bowling and hates to be dominated.

Being an opener, he is used to playing longer, bigger, innings and it is hardly surprising that he has two double centuries in ODIs and one three-figure knock in Twenty20s to his credit.

In full flow, Rohit is a sight to behold, whether smashing speedsters or spinners. He packs a lot of punch in his shots. At the same time, he can be effortlessly brilliant because of his sweet timing and beautiful placement.

There is virtually no cricketing shot that he cannot execute. He is especially stronger on the off, where he hits sixes with aplomb.

India has an imposing batting line-up, studded with gems like Virat Kohli, Suresh Raina, Yuvraj Singh and Mahendra Singh Dhoni, not forgetting bits-and-pieces players like Hardik Pandya, Ravindra Jadeja and Ravichandran Ashwin down the order, but much of the team's success depends on Rohit's form. 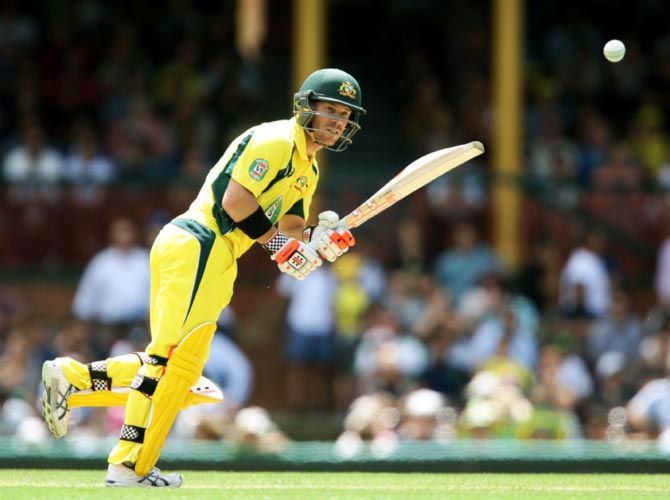 IMAGE: The Aussie is one of the most ferocious strikers of the ball. Photograph: Matt King/Getty Images

Warner, who can open as well as bat in the middle order, is one of the most ferocious strikers of the ball, whatever the nature of cricket.

He is instinctively aggressive and bats in the same vein even in Test matches. He may not yet have scored a century in Twenty20 cricket -- his highest score is 90 not out -- but his strike rate of 141.22 speaks volumes for his aggressive streak.

Warner is a match winner and Australia's fortunes in the World Twenty20 will revolve around his success or failure with the bat.

Check out how he (77) and Maxwell (75) successfully chased down a stiff target of 205 in a Twenty20 game against South Africa at Johannesburg recently.

Dismissing Warner before he settles down would mean half the battle won for Australia's opponents.

Unlike many batsmen, he starts going about his business the moment he arrives at the wicket, which says a lot about his confidence.

Cuts, drives, hooks and pulls, which are some of his trademark shots, keep flowing and flying from his bat if he is in his element.

Warner is all set to set Indian fields ablaze. 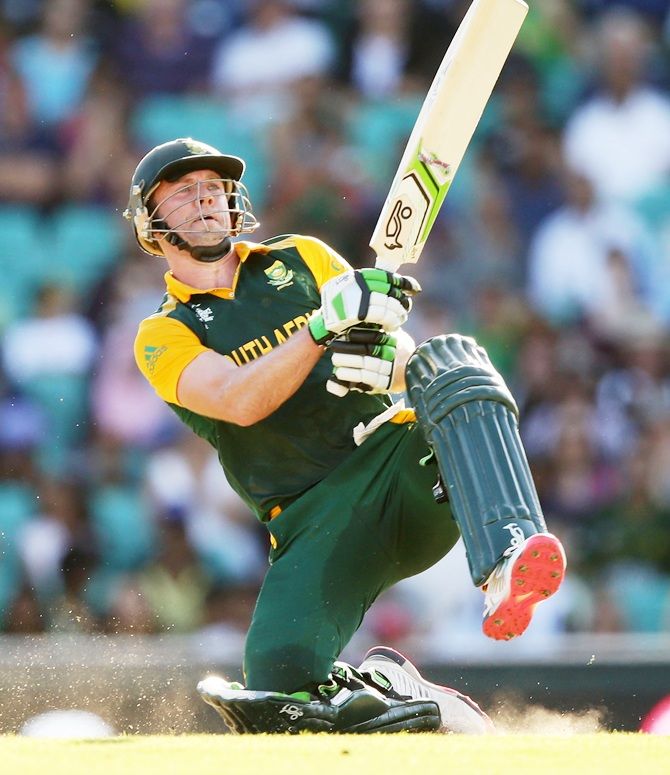 Indisputably the world's most confident and one of the most dangerous batsmen in limited overs cricket, AB is expected to bat at his vintage best in the World T20.

He does not allow any bowler to curb or calm him down. On the contrary, he keeps terrifying the bowlers for as long as he bats.

A mega IPL star, he knows Indian pitches only too well and that should be a big plus for him.

One of those few batsmen capable of hitting fours and sixes at will and virtually off most deliveries if the situation warrants it.

Genius is a term one has to use very carefully about any player, howsoever successful he may be. But if there is any contemporary cricketer who deserves to be called a genius, it is Abraham Benjamin de Villiers. 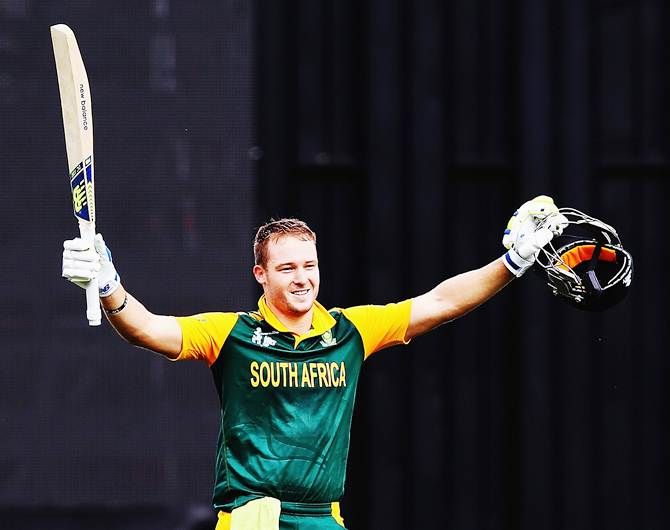 Don't be deceived by Miller's lack of big scores in Twenty20s. He is a tough cookie who can fire on all cylinders.

When the situation is adverse, or a few overs are left and a batsman needs to plunder as many runs as possible, Miller is the man for the job.

In the IPL and other matches, one has seen him save his team from certain defeat and often taken it to the threshold of victories.

Miller is a dynamite down the order -- one reason why he does not have too many big innings against his name.

The southpaw makes up for his lack of elegance and grace with clean, volatile, hitting.

There are chinks in South Africa's batting, despite de Villiers, and Miller will be needed to lend respectability to the score in the event of a collapse. 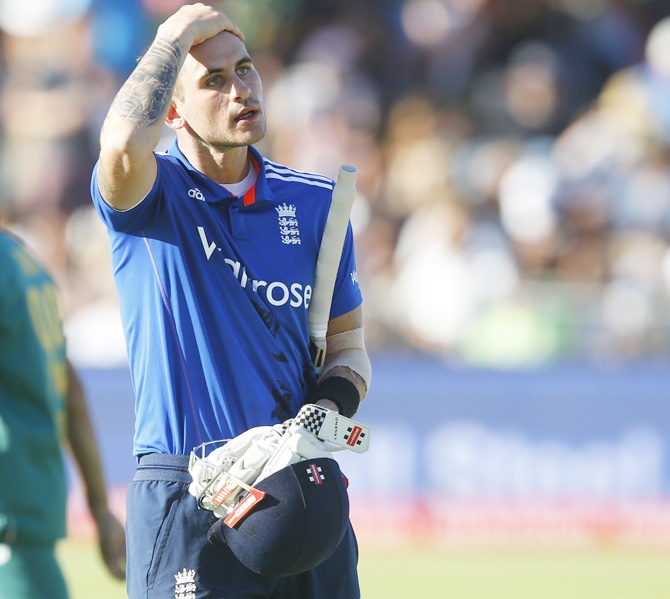 IMAGE: The Englishman is one of the few batsmen to score a century in T20 internationals. Photograph: Mike Hutchings/Reuters

The 27-year-old Englishman could well be the dark horse of the tournament.

Having been ignored by those conservative men who run English cricket until recently, Hales has come into his own with stellar performances in ODIs and T20s.

Hales, 6ft 5in tall, makes judicious use of his height and whacks the ball savagely. He is out-and-out aggressive and is all but an Englishman in his approach to cricket.

He may not be a purist's delight, but what matters is the runs he scores, not how he scores them.

Hales has already joined the exclusive club of batsmen with a T20I century. Skipper Eoin Morgan will surely pin his hopes on him more than on any other batsman, for England to have an impressive run in the tournament. 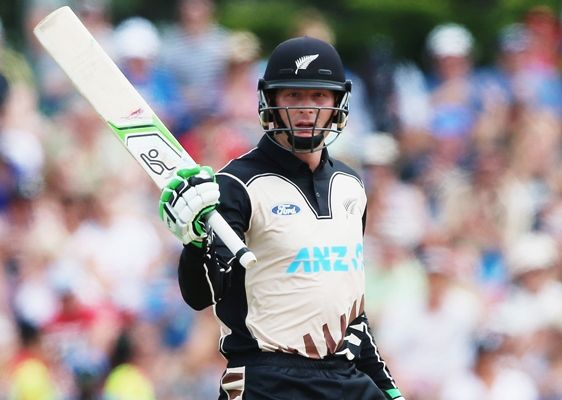 IMAGE: The Kiwi can change the course of a match in a jiffy with his lusty hitting. Photograph: Getty Images

The Kiwi, who bats atop the order, is the cornerstone of New Zealand's batting, particularly in the shorter versions, which he seems to relish.

Like most new generation Kiwi batsmen, he loves to attack. It's his USP. He has the shots and positive approach that make him a dangerous opener in Twenty20s.

Whichever the tournament, New Zealand has never allowed any opposition to underestimate it or take it lightly. Any team committing this mistake in this tournament will do so at its peril.

It is because of players like Guptill, who is capable of changing the course of a match in a jiffy with his lusty hitting, that New Zealand is one of the favourites for the World T20 title. 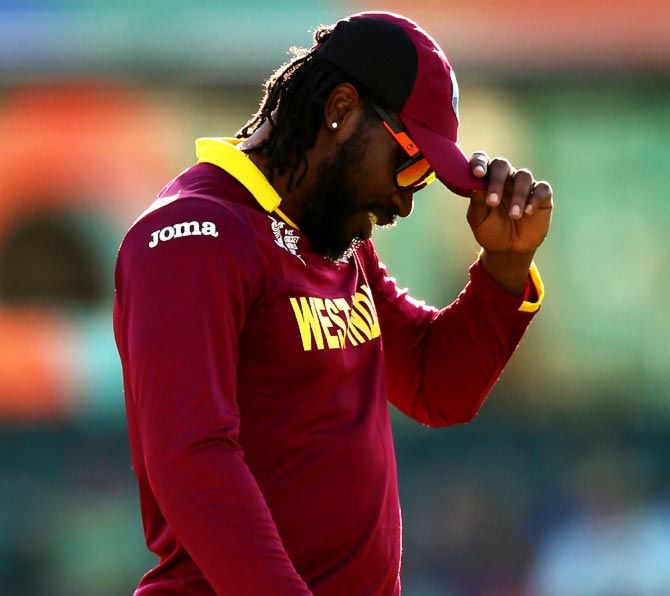 Remove Chris Gayle and the West Indies appears a haggard side, whether in Tests, ODIs or Twenty20s.

It shows his class, stature and greatness.

A savage striker of the ball, Gayle has taken the art of T20 batting to a higher and newer plane.

More than once he has declared that he relishes T20 cricket more than any other form of the game.

No one else bats as he does in cricket's shortest format.

The IPL and other T20 tournaments have sharpened his approach and technique and made him the most dangerous of all batsmen.

Nobody was surprised when he hit 175 not out in an IPL game. And nobody will be surprised if he scores a double hundred in a T20 game.

For all his majestic stroke-play, all his greatness, he is one of the poorest of starters. It is precisely around this time that shrewd captains and clever bowlers target and trouble him. In frustration, he sometimes tries a mighty shot or two, which often proves his undoing.

But once the ball stays hit, it is usually a different Gayle, all set to create mayhem on the field.

It is in such a mood that he appears to be a one-man demolition army, unstoppable and merciless, massacring the bowlers regardless of their reputation.