'Australia is the one place you get the bounce so you can play your shots coming from India and exploring shots that you have kept in your kit. I can get them out.' 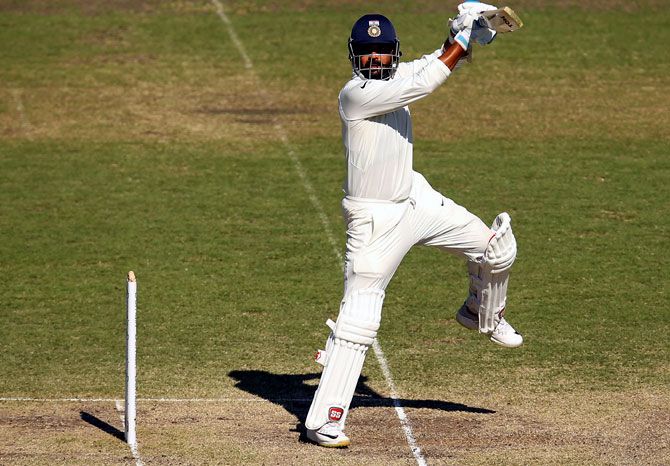 Brushing off any disappointment from being dropped midway through the England Test series, India opener Murali Vijay said on Saturday he fancies his chances on the bouncier Australian wickets, which favour his backfoot game.

The four-day tour game ended in a draw as India scored 211 for two in their second innings in reply to Cricket Australia XI's 544. Vijay smashed a fluent century -- hitting 129 off 132 balls, racing from 52 to the three-figure mark in the space of 27 balls, including taking 26 runs off one over.

"It was good to get some practice hitting over the boundary. I just took my chances and it came my way. I know opportunities are round the corner and wanted to be in a positive frame of mind.

"I have been working hard on my game and fitness, and I am looking forward to contributing in this series. Hopefully I can do that," Vijay said.

Vijay added 109 runs with K L Rahul, who scored a fluent 62, and belied the dressing room's concerns over the opening combination after youngster Prithvi Shaw was injured while fielding on day three.

"Basically I am ready (after playing county cricket, tour matches in New Zealand and Australia). I just want to go out there, contribute and give a good start for my team.

"I have always been aiming at that and nothing is different this time."

The seasoned opener said that he is looking forward to playing Test cricket in Australia again, especially after enjoying a good series during the tour in 2014.

"We (Rahul and him) come from the same part of India so we understand each other well. He is a good guy to bat with and he is fun. Hopefully we can carry that momentum forward into the first Test.

"It always feels good to go to grounds where you have scored runs as it helps you a lot and I have good memories of it."

The bouncier Australia pitches work to his advantage as he likes to play on the backfoot.

"Playing in Australia suits my game because I am a batsman who likes to play on the backfoot. Australia is the one place you get the bounce so you can play your shots coming from India and exploring shots that you have kept in your kit. I can get them out."

When asked about any added responsibility, Vijay replied, "Once you play international cricket you have to have responsibility, whether it is your first year or you have played four years ago. It is about taking responsibility and doing the job for the team. Age or years don't matter here.

"You have to work and find ways to work things out. If you are not part of the team, you have to make sure you keep your work ethics at the top level and once you get the chance you have to be ready to go. That was my basic fundamental after being dropped in England until now."

Vijay denied any concerns about the hosts putting on a 540-odd score, despite India using all of their Test bowling resources. He said the basic idea of the practice game is to get fine tuned for the Test series ahead.

He also said India aren't starting the contest as favourites, but are only aiming to play good cricket.

"Anybody can score runs. We play as per the wicket. We tried our best to get them out. But obviously our intensity was not up to the mark because we were trying a few things and that's going to happen in a practice game.

"That's why we are here. We had prepared to play four days, but missed out on one day. Our bowlers had a good stint today and hopefully they were able to prepare well.

"Everybody has got their practice done. We are now working on a few specifics and the whole idea of practice game is to get the feel going."