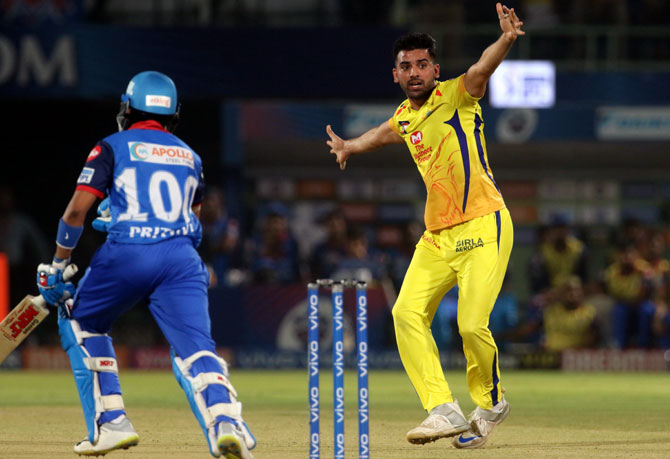 In the end, Chennai Super Kings's experience proved to be the major difference in the all-important IPL Qualifier 2 game against the young Delhi Capitals.

Chennai romped to their 8th final in 10 IPL appearances, after a convincing 6 wicket victory to set up their fourth IPL title clash against familiar foes, the Mumbai Indians.

Electing to bowl, CSK got an early breakthrough when Prithvi Shaw threw his wicket away. Trying to play the pull shot, he missed and was trapped leg before wicket by Deepak Chahar for 5.

Seasoned campaigner Shikhar Dhawan was caught behind off Harbhajan Singh for 27.

The in-form Shreyas Iyer, instead of walking in at No 3 and taking charge of the situation, sent in Colin Munro to counter-attack and put the pressure back on CSK's bowlers.

Munro paid the price for playing one shot too many as he perished in the deep off Ravindra Jadeja for 27, when he should have looked to carry on after getting off to a start.

Captain Iyer also lost his wicket trying to play a loose shot, looking to loft Imran Tahir over the leg side. He got a leading edge and was caught on the off-side.

All-rounder Axar Patel came ahead of specialist batsman Sherfane Rutherford, but he also fell cheaply as Delhi slipped to a lowly 80/5 in the 13th over.

Rishabh Pant was left with too much to do at the end, as he hit a steady 38 from 25 balls, but was unable to get the boundaries at the end as Delhi finished on a below-par 147/9 in their 20 overs.

In contrast, CSK's opening duo of Shane Watson and Faf du Plessis brought all their experience into play, denying Delhi early wickets as they put on a decisive stand of 81 runs for the opening wicket from 10.2 overs.

Faf and Watto hit 50 each and there was no way back for Delhi from that stage onwards as CSK stayed on course to defend their IPL title.