'There are always cases of human error, so in this case he made a human error, not thinking that a cough syrup will get him banned and that is the unfortunate part. He is just 19 and this was his first offence.'

A former official tells Rediff.com's Harish Kotian why Shaw deserved a lighter sentence, and why BCCI’s anti-doping programme is the best in the country. 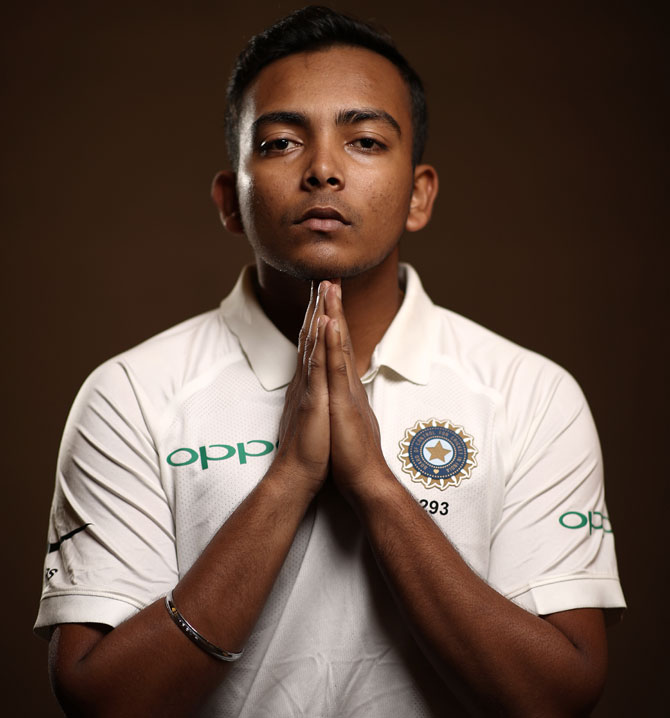 Prithvi Shaw made a ‘human error’ and did not deserve the harsh eight-month ban for doping when other players have escaped with lighter sanctions for similar offences in the past, opined a former BCCI official.

“In this case, Shaw had been educated often, at least three times in three different years, but he was careless; he didn’t check whether the drug was in the banned list or not. There are always cases of human error, so in this case he made a human error, not thinking that a cough syrup will get him banned and that is the unfortunate part. He is just 19 and this was his first offence,” the official, who was part of the Board of Control for Cricket in India’s anti-doping programme, told Rediff.com on condition of anonymity.

He cited the example of Sri Lanka’s Upul Tharanga and former India all-rounder Yusuf Pathan, who were both guilty of testing positive for Terbutaline, the same substance that got Shaw in trouble, but were slapped with only three-month bans.

“If you see, there was this Sri Lankan player (Upul Tharanga) who tested positive for Terbutaline after he had taken an ayurvedic cough mixture, so he got three months’ ban.

"In Yusuf Pathan’s case, he had the same thing, but he was given a three-month ban, so that he could play in the IPL.”

The official believes it would have been tough for a young player like Shaw to know that a simple cough syrup could land him in trouble.

“The focus should have been on convincing the independent review board that it was a first offence and it is by a 19-year-old kid. Eighty percent of the cases are cough mixtures which are accidental cases, so they could have given Shaw a three-month ban,” he stated.

However, the positive test is not a reflection of the BCCI's stance on doping. In fact, the BCCI’s anti-doping programme is the best in the country and it is because of which the number of positive tests are very less, he pointed out.

“BCCI, for all the unfortunate perception that they are not up to date on dope testing, they are doing a terrific job. From 2010 till now, we had four positive cases, out of which three were Indians and one was a foreign player.

“All three of them were on Terbutaline, so that is just bad luck. They took a cough syrup without monitoring what they of mixture it is.

“It is by far the best anti-doping programme in India among all the different sports as well as in the ICC education; we are as good as Australia or England. We do the most testing, around 250 tests a year.

“The education programme was the key to it all and, second is, we had a 24x7 call centre, where you could phone anytime of the day or night and ask if you could take a particular medicine or not. In each zone, we had a doctor, and if they still had any doubts they could come back to the BCCI anti-doping panel.

“When they went to see a doctor at his clinic, before he prescribed anything, the anti-doping booklet was shown to him which showed him the list of banned drugs. The doctor would then be encouraged to phone the BCCI panel and take advice. So it is a strict system!”

“In India, because cricket is looked on as a high-profile sport everybody wants to get on the bandwagon.

“Now, without being critical, if you see the results, NADA has a high level of positive tests. We have had only four positive tests since 2010 in cricket but they have around 200 every year. I believe they don’t have a teaching programme, but we have a teaching programme in English and Hindi in a booklet form, plus we have seminars. All the Under-16 players -- men and women, Under-19, Under-23 and the senior players of all the states undergo this education programme.

"We have a team of doctors who go around teaching the programme and each player has to sign up, and if he doesn’t attend the programme he is not allowed to register for the season.

"It is near foolproof, but, like with any legal issues, there can be slip-ups and the slip-up in Prithvi’s case was that he didn’t inform his team doctor, he didn’t take advice from the base doctor. And then the independent review board should have looked at it leniently because it was his first offence. He is a young guy and you could have given him three months.”

“With regard to anti-doping, BCCI is doing a great job with the education programme, because they have over 3000 players in all the states. Maybe they could be stricter and ensure that all the players must attend the awareness programme.

“They should be stricter so that when a player is taking any medicine, even if it is provided by the team doctor or the team physio, they should phone the 24x7 helpline and recheck with them.”