Anurag Thakur is set to be unanimously elected as the BCCI's youngest President in the Board's Special General Meeting (SGM) in Mumbai on Sunday, replacing Shashank Manohar who quit the position to take up the ICC chief's job. 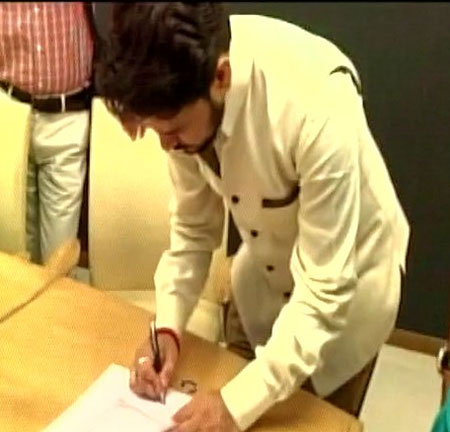 Thakur, who resigned as the Secretary of the Board of Control for Cricket in India, got the signatures of all six east zone units in his BCCI presidential nomination form as he completed the formalities in presence of former India captain and CAB president Sourav Ganguly in Mumbai.

Just to show solidarity, all the six east units, Cricket Association of Bengal, Assam CA, TripuraCA, NCC and Jharkhand SCA signed his nomination papers even though the rules require only one unit to nominate the name for presidential candidate.

The 41-year-old, who is also a BJP MP in Lok Sabha, will be taking over the reins of the embattled Board in rather tough times as the BCCI is facing heat from the Supreme Court to implement the Justice R M Lodha Committee's recommendations for sweeping reforms.

Manohar's exit from the top post barely seven months into his tenure has necessitated the election of the new chief of the world's richest and most powerful cricket body.

He was elected as ICC's first independent chairman on May 12.

Once Thakur is elected unopposed, it would be his prerogative to pick his replacement for the Secretary's position and Maharashtra Cricket Association chief and business magnate Shirke is all set to take that position.