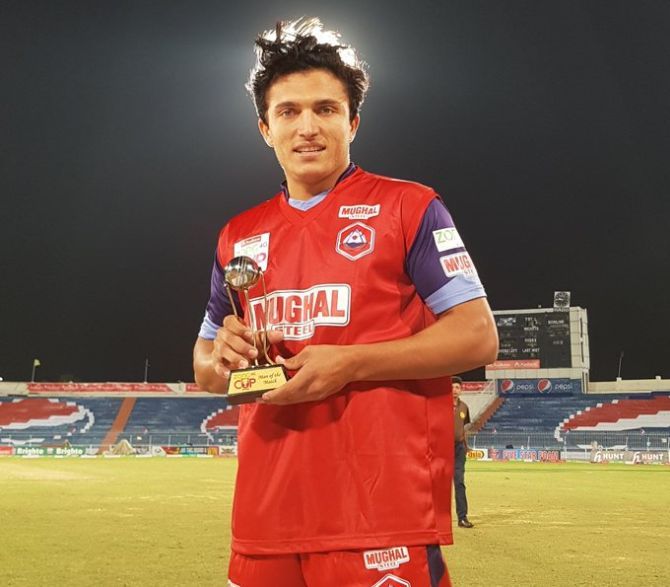 IMAGE: The inclusion of Naseem Shah and Musa Khan (in photograph) is seen as a bold move by head coach and chief selector Misbah-ul-Haq, who wants the team to play aggressive cricket under new Test skipper Azhar Ali. Photograph: Pakistan Cricket/Twitter

Pakistan's rookie pace duo of Musa Khan and Naseem Shah have promised to rattle Australia with their speed when they travel Down Under next month for a two-test series and three Twenty20 Internationals.

Seen as two of the fastest bowlers in Pakistan's domestic circuit, 19-year-old Musa was included in both squads on Monday, while 16-year-old Naseem has been named in the Test attack featuring a third teenager in Shaheen Afridi.

"I am not thinking about bowling to the likes of David Warner or Steve Smith, rather I want to make an impression with my pace and penetration," Musa said in a news release issued by the Pakistan Cricket Board on Tuesday.

"My strength is bowling fast. Waqar Younis and Shoaib Akhtar are my fast bowling idols and I want to replicate their performances and instil fear in batsmen like they did."

The inclusion of Naseem and Musa is seen as a bold move by head coach and chief selector Misbah-ul-Haq, who wants the team to play aggressive cricket under new Test skipper Azhar Ali.

Naseem, who has already built a domestic reputation for his sharp bouncers, said that on his maiden call-up he also hopes to have an immediate impact.

"I aim to make an impression with my speed and swing if given a chance in the tests against Australia," he said.

"The conditions in Australia help fast bowlers, my aim is to make maximum use of the conditions and give a tough time to the home side. Playing on hard and bouncy pitches will be a great experience and a learning curve for me."

Beginning on November 3, Pakistan will play three Twenty20 Internationals in Australia before the Tests in Brisbane and Adelaide, the last being a day-night affair.