Statistical highlights of the second ODI between India and Sri Lanka, on Mohali on Wednesday. 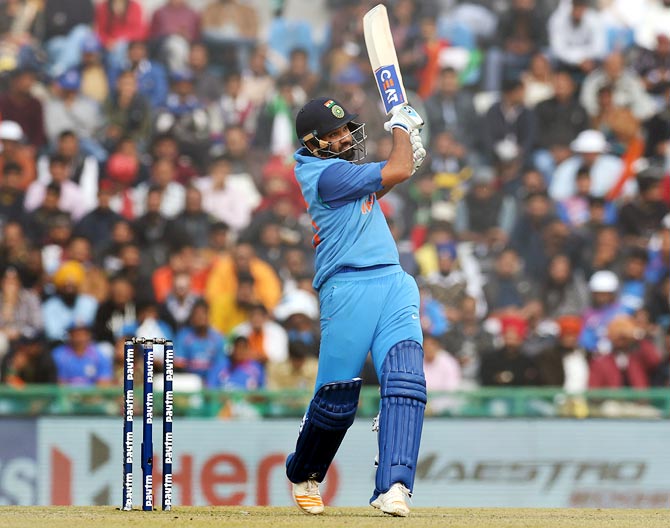 208 Rohit Sharma's superb unbeaten innings of 208 is the second highest by a captain in ODIs -- the highest being 219 by Virender Sehwag against the West Indies at Indore on December 8, 2011. These two innings are the only double centuries by captains in ODIs.

3 Having registered two double centuries previously -- one each against Australia and Sri Lanka -- Rohit, with his unbeaten 208 against Sri Lanka in Mohali on Wednesday, has become the first batsman to hit three double centuries in ODIs. Apart from Rohit, no other batsman has registered even two. The other players combined have recorded only four double hundreds - one each by Sachin Tendulkar, Martin Guptill, Virender Sehwag and Chris Gayle.

5 Rohit equalled the record of posting five innings of 150 or more in ODIs. India's Sachin Tendulkar and Australia's David Warner are the first two to achieve the feat.

6 Rohit has posted six centuries this year in ODIs, emulating Virat Kohli's tally in 26 innings. He becomes the third Indian opening batsman to record six hundreds or more in a calendar year, joining Sachin Tendulkar (9 in 1998 and 6 in 1996) and Sourav Ganguly (7 in 2000).

2 The top two innings -- both double hundreds -- for India vs Sri Lanka in ODIs have been played by Rohit. His previous double hundred against them is 264 at Kolkata on November 13, 2014 -- a record for the highest individual innings by any batsman in ODIs. His first double hundred in ODIs was 209 off 158 balls vs Australia at Bangalore in 2013.

3 Rohit's third Man of the Match award vs Sri Lanka is his 12th in ODIs.

4 Sharma is the first player to be adjudged Man of the Match four times this year in ODIs.

12 Rohit recorded 12 sixes during his double century knock at Mohali -- the second highest tally by a captain next only to the 16 during his innings of 149 off 44 balls vs West Indies at Johannesburg on January 18, 2015.

45 Rohit has hit 45 sixes already in 20 innings this year -- the most by an Indian batsman in a calendar year in ODIs.

12 The 115-run stand between Rohit Sharma and Shikhar Dhawan is their 12th for the first wicket, equalling the tally of Tendulkar and Sehwag. Only one opening pair has registered more century stands for India -- 21 by Tendulkar and Ganguly.

1 Shreyas Iyer (88) has posted his first fifty in international cricket.

213 Rohit and Iyer were involved in a stand of 213 for the second wicket - India's first double century stand for any wicket in ODIs at Mohali. The said stand is the second highest by any pair at this venue next only to the 221 for the third wicket between Hashim Amla and Abraham de Villiers for South Africa vs Netherlands on March 3, 2011.