Statistical highlights of the first ODI cricket match between India and New Zealand, in Dharamsala, on Sunday. 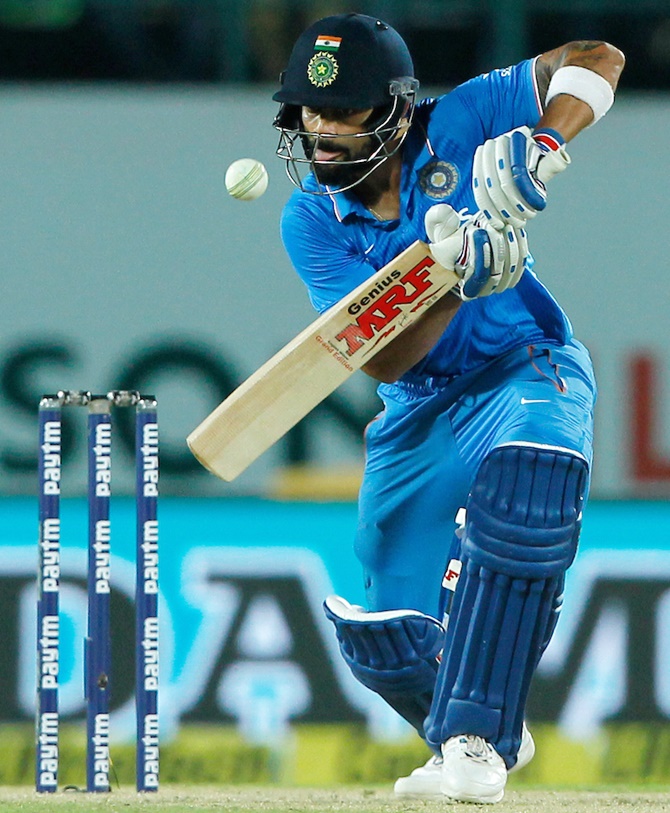 # Kohli has now recorded 32 innings of fifty-plus while chasing in day/night matches - the second highest tally next only to Sachin Tendulkar's 34 - nine centuries and 25 fifties.

# Kohli's record in ODIs on Indian soil is quite impressive - his tally being 2929 runs at an average of 56.32, including 10 centuries and 17 fifties.

# Kohli is the 15th Indian player to be involved in 100 or more matches in a winning cause in ODIs. Sachin Tendulkar tops the charts, featuring in 234 matches.

# Since winning by 8 wickets at Chennai on December 10, 2010, India have won their first match in six outings vs New Zealand in ODIs. Of the five previous matches vs New Zealand, India had lost four while one got tied.

# Kedar Jadhav (2/6) has bowled exceptionally well for the first time in ODIs. In his first seven ODIs, he did not bowl. 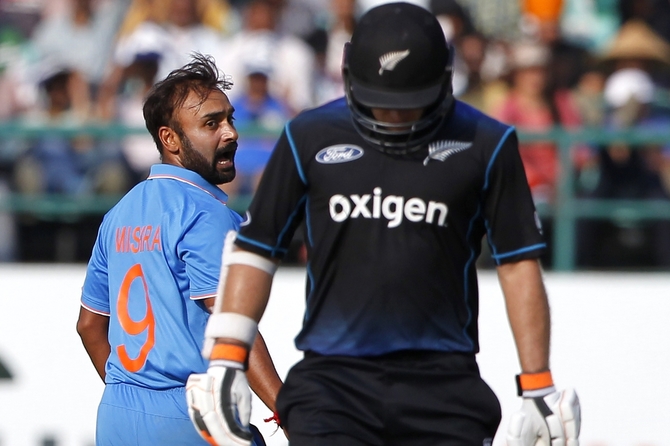 IMAGE:  Amit Mishra of India celebrates a wicket against New Zealand in the first ODI at Dharamsala. Photograph: BCCI.

# Mishra has completed his 50 wickets in ODIs - his tally being 52 (ave.25.86) in 32 matches - the quickest by an Indian spinner in ODIs, obliterating Ravichandran Ashwin's feat of reaching the landmark in 34 ODIs.

# Hardik Pandya became the fourth Indian player to have received the Man of the Match awards on ODI debut. Previously Sandeep Patil, Mohit Sharma and Lokesh Rahul had got the awards on debut.
# Pandya's excellent figures of 3 for 31 are the fourth best by an Indian bowler on ODI debut - the best figures being 3 for 21 by Noel David vs West Indies at Port of Spain on April 27, 1997.

# Ross Taylor's first duck vs India is his ninth in ODIs.

# In India, Taylor's batting record in ODIs is just mediocre - his tally being 252 in nine innings at an average of 28.00, including two fifties. Four times, he has registered single-digit scores in India. His highest in India is 74 vs Canada at Mumbai on March 13, 2011. 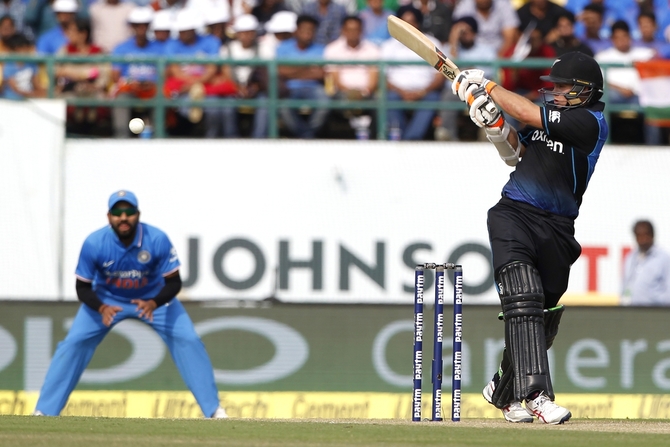 # Tom Latham's unbeaten 79 is his first fifty on his first appearance against India - his second in ODIs in Asia - the first being 86 vs Sri Lanka at Hambantota on November 12, 2013.

# Latham's first fifty vs India is his fifth in ODIs. His unbeaten 79 is his highest score in a losing cause in ODIs. He had recorded two more fifties in a losing cause - both vs South Africa - 60 at Centurion and 54 at Durban – both in August 2015.

# Tom Latham (79 not out off 98 balls) has become the first New Zealand batsman and the tenth overall to achieve the feat of carrying the bat in ODIs.

# Latham became the first batsman to register the feat vs India besides becoming the first player to produce the feat in India.

# Southee and Latham were involved in a stand of 71 – New Zealand's highest stand for the ninth wicket vs India in India in ODIs, eclipsing the 67 between Kyle Mills and Nathan McCullum at Guwahati on November 28, 2010.

# The above stand is the second highest for the ninth wicket for New Zealand vs India in ODIs behind the 83 between Southee and Mills at Christchurch on March 8, 2009.

# New Zealand's last three wickets produced 125 runs - the most for them in an ODI.