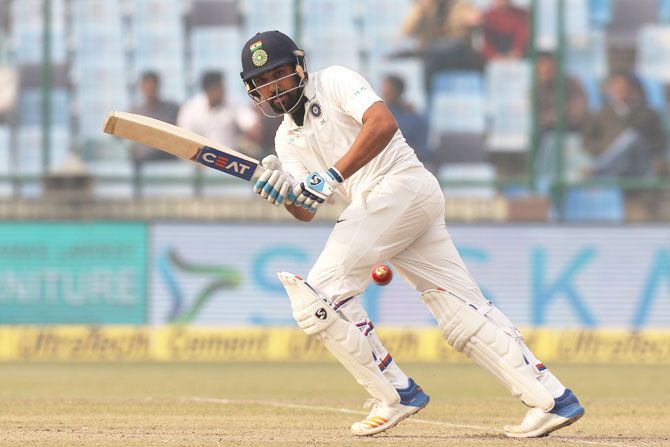 # Rohit Sharma has been a consistent performer in recent Tests. For the first time in Tests, he has recorded five successive innings of 50-plus - 82 & 51 not out vs New Zealand, followed by 102 not out, 65 & 50 not out vs Sri Lanka in the present series.

# Cheteshwar Pujara has taken his runs' tally to 1140 at an average of 67.05 including four centuries and five fifties in eleven Tests - the highest by a batsman in Tests this calendar year, eclipsing South Africa's Dean Elgar's tally of 1097 (ave. 54.85), including five centuries and four fifties, in 11 Tests.

# Kohli is the second Indian captain after Sunil Gavaskar (205 & 73 vs West Indies at Mumbai in 1978-79) and the seventh to post a double century and a fifty in the same Test match.

# Kohli is now the first Indian captain to aggregate 600-plus twice in a Test series. He had first achieved the feat against England in 2016-17 - 655 runs at an average of 109.16, including two hundreds and two fifties, in the five-Test
series. Apart from two instances by Kohli, Sunil Gavaskar remains the only Indian captain to achieve the distinction - 732 (ave.91.50) in six Tests vs West Indies in 1978-79.

# Kohli has become the sixth Indian batsman to complete 1,000 runs vs Sri Lanka in Tests - his tally being 1004 (ave.77.23), including five hundreds and two fifties, in just nine Tests. He has joined Mohammad Azharuddin, Sachin
Tendulkar, Rahul Dravid, Sourav Ganguly and Virender Sehwag to accomplish the feat. Kohli's average is the highest among the Indian batsmen with 1,000 runs or more vs Sri Lanka.

# Dhawan's record against Sri Lanka is quite impressive, aggregating 712 in ten innings (six Tests) at an average of 71.20, including three hundreds and two fifties.

# Rahane, in the current rubber, is averaging just 3.40 at a strike rate of 20.73 - the aggregate is 17 runs in five innings. His poor strike rate and the batting average are his worst in a Test rubber.

# Chandimal became the first Sri Lankan skipper to register an innings of 150-plus in a Test innings in India.

# For the sixth time in Tests, both captains have recorded 150 or more in the same Test.

# Suranga Lakmal's 13th duck in Tests is his first vs India.