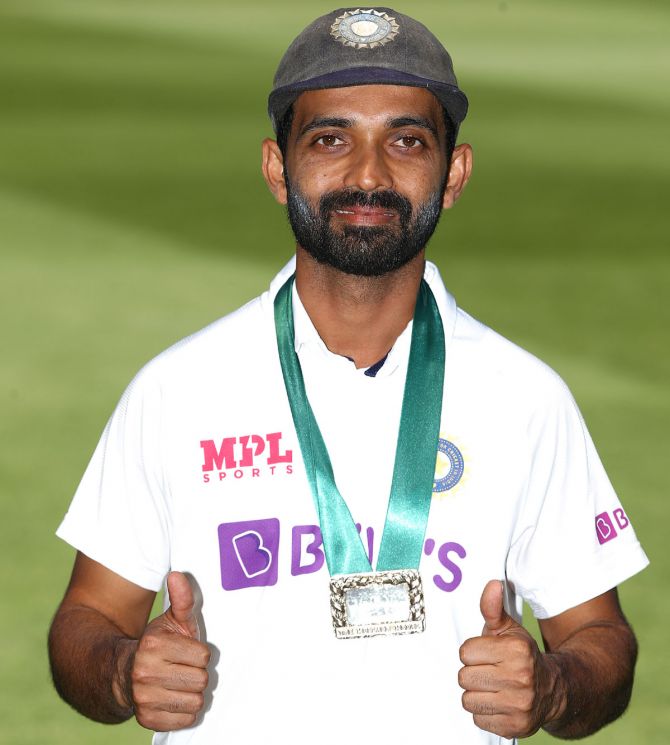 IMAGE: Captain Ajinkya Rahane with the Johnny Mullagh medal after being named Man of the Match in the Boxing Day Test at the MCG on Tuesday, December 29, 2020. Photograph: Robert Cianflone/Getty Images

Captain Ajinkya Rahane led from the front with a century as India outclassed Australia by eight wickets in the second Test at Melbourne on Tuesday, to level the four match series at 1-1.

He got good support from Ravindra Jadeja, who made 57, as the duo put on 121 runs for the sixth wicket.

Rahane also played a good hand of 27 not out in the second innings as he along with debutant Shubman Gill (35 not out) steered India to an easy victory on the fourth day of the Boxing Day Test.

The Mumbai right-hander was deservedly named Man of the Match for his superlative batting. What made it special was that he was awarded the inaugural Johnny Mullagh medal.

Rahane boasts of a 100 percent success record as the captain, having led India to three wins -- against Australia in Dharamsala in March 2017 and against Bangladesh in Bengaluru in January 2018.

Mullagh, who played on the 1868 Aboriginal team that was Australia's first to tour England, became the first Indigenous inductee into Australia's cricket Hall of Fame on Monday.

Born 'Unaarrimin', Mullagh played in the third cricket match ever staged at the MCG on Boxing Day in 1866 for the Aboriginal and T W Wills XI against the Melbourne Cricket Club.

Hall of Fame Chairman Peter King said the selection panel had modified its criteria to allow Mullagh to be inducted given he never represented Australia in Tests.