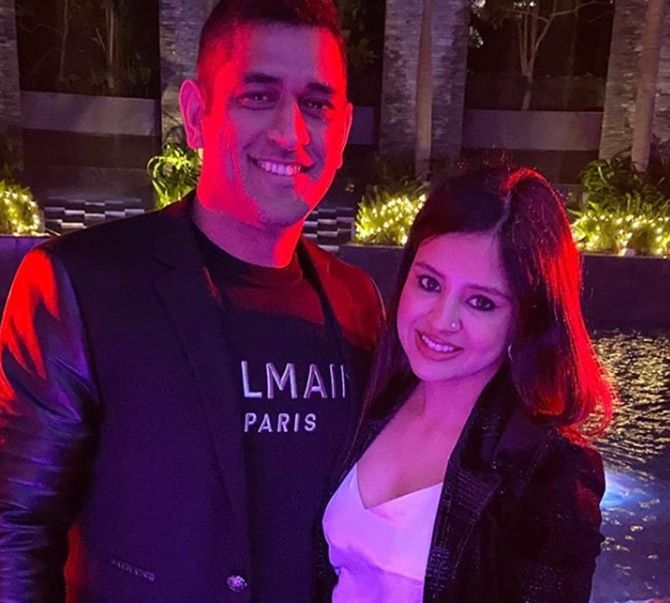 Mahendra Singh Dhoni's wife Sakshi on Sunday revealed her post-lockdown plans with her better half, saying that if cricket does not resume, they will go to Uttarakhand.

"Post-lockdown, if there is cricket, then cricket. If there is no cricket post lockdown, then Mahi and I have planned to hit the hills. We will go to Uttrakhand. Mahi loves snow," Sakshi said during the live session.

Sakshi further said that the coronavirus-imposed lockdown has not changed much of their routine and her daughter, Ziva, has kept them occupied.

She also revealed that the former India skipper is addicted to the uber-popular game 'PUBG' and now he even talks about it during his sleep.

"He has got a thinking brain, it does not rest. When he plays video games, it helps him divert his mind, which is a good thing. Nowadays PUBG has encroached my bed. Mahi is sleep talking about PUBG these days," Sakshi said during the interaction.

She also spoke of how his bikes keep the former India captain busy.

"Mahi has 9 bikes. He opened them up, he bought parts and assembled them. He was assembling a bike and fully assembled it and he forgot to put one part and the next day he had to open the bike and he had do it all over again," she added.

Sakshi also opened up about the former captain's camaraderie with his teammates.

"Mahi has always kept his door open. It has been like that since 2010 (when we got married). People come, we chat sometimes till 3-4 in the morning. When they come to talk to Mahi about cricket, I go away."

In a lighter vein, Sakshi said only she can pick up a fight with 'ice-cool' Dhoni.

"Nobody picks up a fight with him. I am the only one," she concluded.

Dhoni was to return to action during the 2020 edition of the Indian Premier League (IPL) as the former captain has not played competitive cricket since the last year's Cricket World Cup. However, the league has been postponed indefinitely due to the coronavirus crisis.

Also, earlier this year, Dhoni did not find a place for himself in the BCCI's centrally contracted players list. The board had released the list of central contract list of players for the period from October 2019 to September 2020.