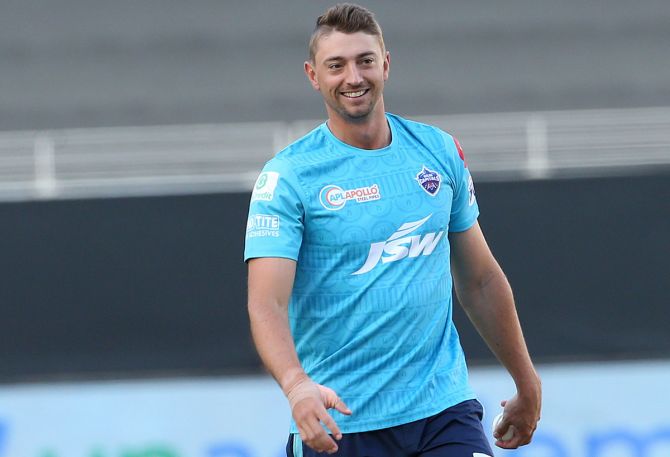 IMAGE: Australian all-rounder Daniel Sams arrived in India on April 3 and had a negative COVID-19 test report at that time but his report from the second test on April 7 came positive, said his franchise Royal Challengers Bangalore. Photograph: BCCI

Royal Challengers Bangalore's Australian all-rounder Daniel Sams on Wednesday tested positive for COVID-19 ahead of the IPL, starting in Chennai on April 9, but opener Devdutt Padikkal recovered from the dreaded infection to join the side.

According to a statement issued by RCB on Twitter, the 28-year-old Australian all-rounder arrived in India on April 3 and had a negative COVID-19 test report at that time but later tested positive.

"His report from the 2nd test on 7th April came positive. Sams is currently asymptomatic and he is currently in isolation at a designated medical facility," the RCB said.

"Royal Challengers Bangalore medical team is in constant touch with Daniel Sams and continue to monitor his health and abide by the BCCI protocols."

RCB will take on defending champions Mumbai Indians in the tournament-opener on Friday.

Sams was traded to the RCB this season from Delhi Capitals. He became the second RCB player to test positive for the infection after left-handed opening batsman Padikkal.

Padikkal, however, came out negative in the latest round of testing. The 20-year-old had been in home quarantine since March 22 after being infected. He was RCB's highest scorer last season with 473 runs from 15 matches.

"Devdutt Padikkal, has joined the team on 7th April 2021 with negative reports for COVID-19 as per BCCI protocols. RCB medical team was in constant touch with Devdutt to ensure his safety and well-being," the franchise stated in a separate release.

On Tuesday, Mumbai Indians' wicket-keeping consultant and talent scout Kiran More had also tested positive for the virus, but all other members of the defending champions' squad returned negative reports.

IPL 2021 has been hit hard by the coronavirus even before its start as a number of ground-staff at the Wankhede Stadium in Mumbai, broadcast crew event management officials, and some cricketers, including the likes of Axar Patel and Nitish Rana, have contracted the infection.