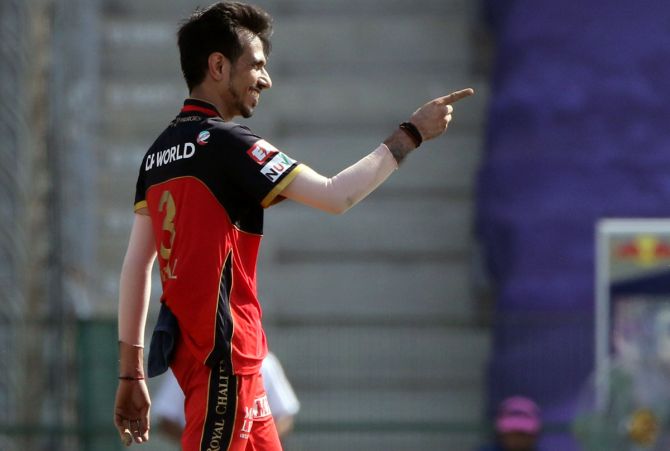 Rajasthan Royals started off on the right note as they won the toss and bagged the key advantage of batting first against the Royal Challengers Bangalore in the first day game of IPL 2020, on a hot afternoon, in Abu Dhabi, October 3, 2020.

However, they lost the initiative early by losing Captain Steve Smith cheaply, who was bowled by pacer Isuru Udana for five, in the third over.

Navdeep Saini then dented the Royals further with the key wicket of Jos Buttler for 22, who was getting warmed up and threatening to take the bowlers apart.

RCB Captain Virat Kohli did well to keep attacking despite the early strikes and continued to hunt for wickets as he brought his top strike bowler Yuzvendra Chahal inside the Powerplay, for the fifth over.

Chahal struck a vital blow with his very first delivery, getting the in-form Sanju Samson (4) caught and bowled courtesy of a superb diving catch to his right. The television umpire checked the replays which were inconclusive and he sought to stay with the on-field umpire's decision of giving Samson out.

With their top three gone cheaply, Rajasthan were faced with a stiff task of inching their way back into the contest.

The experienced Robin Uthappa and the young Mahipal Lomror tried to bring the innings back on track, but it was Chahal once again, who foiled their plans.

He struck again with the first ball of his second over, this time getting Uthappa caught at long-off for 17 after he tried to break free.

Left-handed Lomror took on Chahal with a couple of sixes but it was the leggie who had the last laugh.

Lomror, who made 47 from 39 balls, missed out on a deserved half-century as he was caught at long-off and his wicket put paid to Rajasthan's efforts of posting a total worth challenging the power-packed RCB batting line-up.

Even though he went for 20 runs in his final two overs, Chahal finished with excellent figures of 3/24 in his four overs.

But the total hardly challenged RCB as half-centuries from Devdutt Padikkal and Virat Kohli powered them to a comprehensive eight-wicket victory.