Riding on Mitchell Marsh's all-round heroics, Delhi Capitals got their act together in the nick of time to upstage Rajasthan Royals by eight wickets and keep their IPL playoffs hopes alive here on Wednesday.

After their bowlers restricted RR to 160 for six, Marsh's 62-ball 89 and David Warner's unbeaten 52 off 41 balls helped the Capitals complete the task with 11 balls to spare for their sixth win of the season that saw the team suffer setbacks both on and off the field, including multiple COVID-19 cases in its camp. With the ball, Marsh had picked up the two important wickets of Yashasvi Jaiswal (19) and Ravichandran Ashwin (50). Then, he smashed seven sixes and five fours to emerge as the night's hero.

DC lost Srikar Bharat in only the second ball of their innings to Trent Boult, who conceded just one run in the first over. That was followed by a maiden over by Prasidh Krishna and then the Kiwi speedster bowled another economical over as DC struggled to force the pace early on, reaching five for one in three overs. 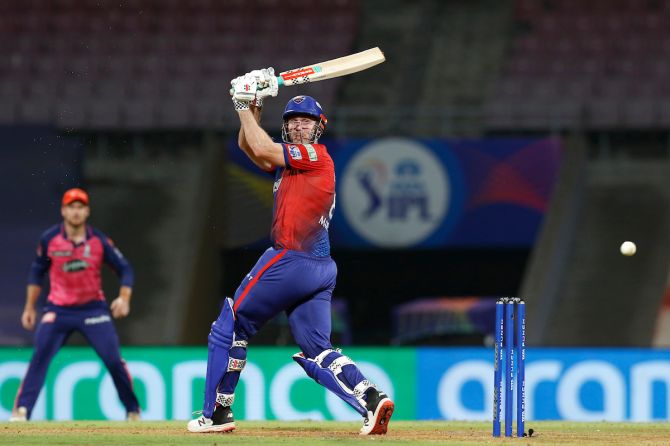 IMAGE: Mitchell Marsh of Delhi Capitals smashes a four on his way to recording a 50 against Rajasthan Royals. Photograph: BCCI

The introduction of Ashwin saw Marsh launching the off-spinner over long-off for a six. Marsh did the same to Prasidh, hitting him for a maximum over fine-leg to give the much-needed impetus to the DC innings.

There was more to come from the willow of Marsh as he smashed Kuldeep Sen for two sixes and a similar treatment was given to Ashwin as the ball, despite Jos Buttler's effort in the deep, sailed over long-on for a maximum, bringing up the Australian all-rounder's fifty. By the time the 143-run stand was broken by Yuzvendra Chahal with the wicket of Marsh, the match was almost in DC's bag. 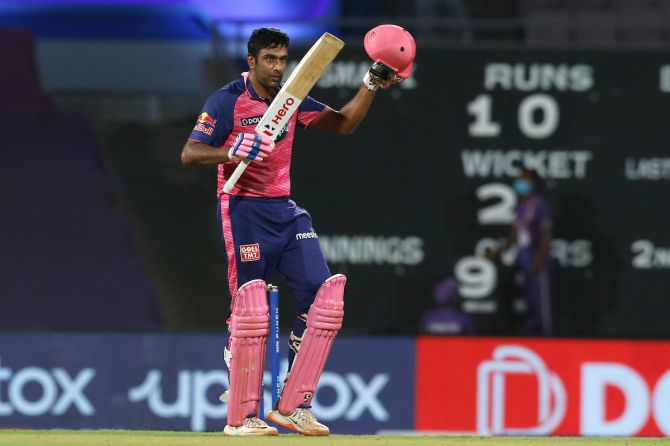 Striking at better than most of the top batters, premier off-spinner Ravichandran Ashwin recorded his first half-century in T20 cricket as Rajasthan Royals posted 160 for six against Delhi Capitals.

Ashwin made a 38-ball 50, while Devdutt Padikkal struck 48 in 30 deliveries after RR were asked to bat first.

The Capitals were off to fine start as left-arm pacer Chetan Sakariya (2/23), playing the must-win game in place of Khaleel Ahmed, dismissed RR's top batter Jos Buttler (7) cheaply in the third over.

Looking to play it over the infield, Buttler hit a fairly full-length delivery straight to Shardul Thakur. 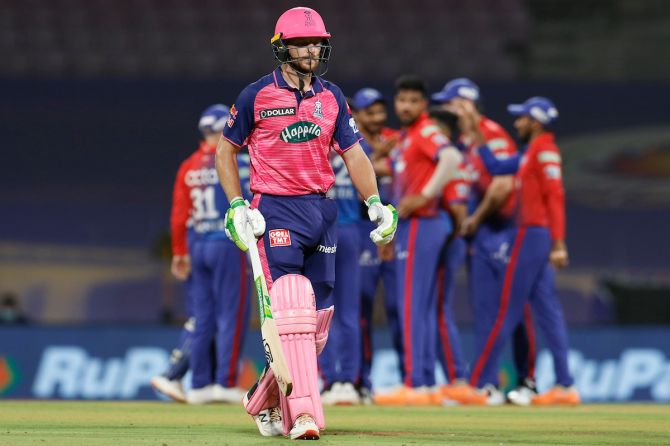 IMAGE: In-form Jos Buttler got out cheaply for 7 in the third over against Delhi Capitals . Photograph: BCCI

With Buttler gone early, DC were on top and looked to assert their dominance at the DY Patil Sports Complex. They gave very little away and kept RR to 43 for one in the six power play overs.

This was after DC skipper Rishabh Pant decided against a review despite a strong appeal by Sakariya for a caught behind in the first over. Replays confirmed that Pant was right in not opting for a review.

Coming off his blazing half-century in the previous game, Yashasvi Jaiswal produced a lovely on-drive off Anrich Nortje (2/39) and then smashed the South African pacer for a six over third man.

Jaiswal (19) impressed again, but not for long as Mitchell Marsh (2/25) cramped him up for room with a bouncer, paving the way for the left-handed Devdutt Padikkal to join Ashwin in the middle. Looking confident after having hitting a few boundaries, including two maximums and a ramp shot over keeper Pant, Ashwin went along nicely and brought up his half-century in 38 balls.

However, the premier off-spinner got out soon after reaching the landmark with Marsh coming back into the attack to give DC the breakthrough.

Meanwhile, Padikkal smashed Axar Patel for two sixes -- one over deep backyard point and another over long-on -- as RR looked to force the pace. 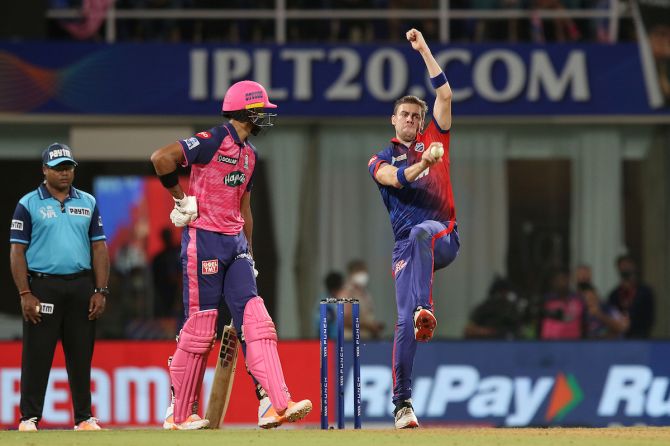 Padikkal then scored two successive fours off Marsh, even as Nortje had RR skipper Sanju Samson (6) caught by Shardul Thakur at mid-wicket. As the DC players rejoiced, Kuldeep Yadav was seen walking off the ground holding his left shoulder, having hurt himself while going for a catch in the previous over. 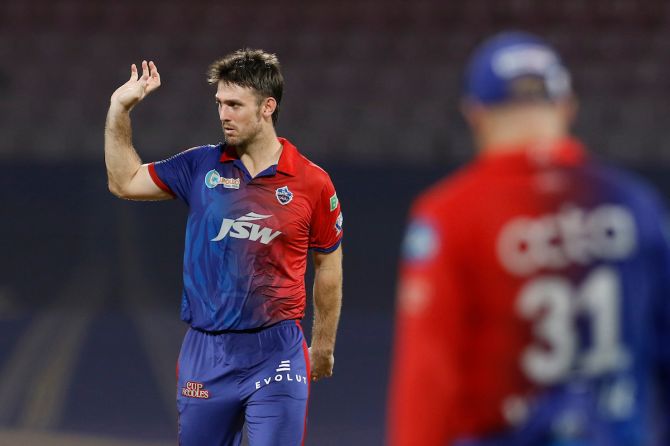 Riyan Parag hit Nortje for a massive six before Sakariya cut short his brief stay in the middle, and Padikkal too followed suit, thanks to brilliant catch running by substitute fielder Kamlesh Nagarkoti.