Images from the Indian Premier League match between Royal Challengers Bangalore and Punjab Kings, in Sharjah, on Sunday. 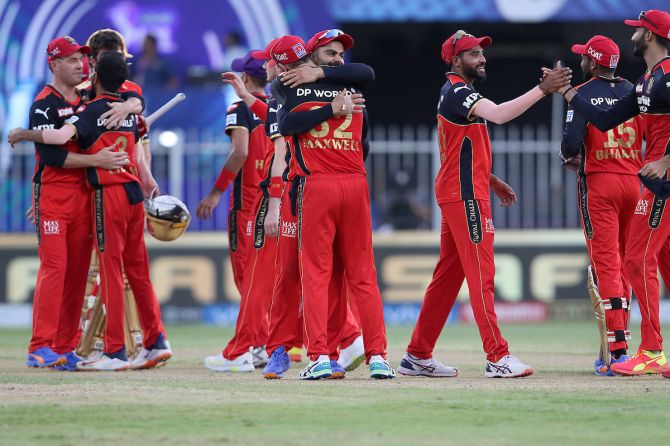 Glenn Maxwell scored a hurricane 57 before Yuzvendra Chahal had Punjab Kings in a twirl as Royal Challengers Bangalore sealed a play-off berth in the Indian Premier League with a six-run victory, in Sharjah, on Sunday.

Maxwell blasted a 34-ball-57 to power the Royal Challengers to 164 for 7, the highest team total registered at the Sharjah ground this season, and Chahal reigned in the middle-overs with another game-changing spell of 3 for 29 to restrict K L Rahul’s Punjab Kings to 158 for 6. 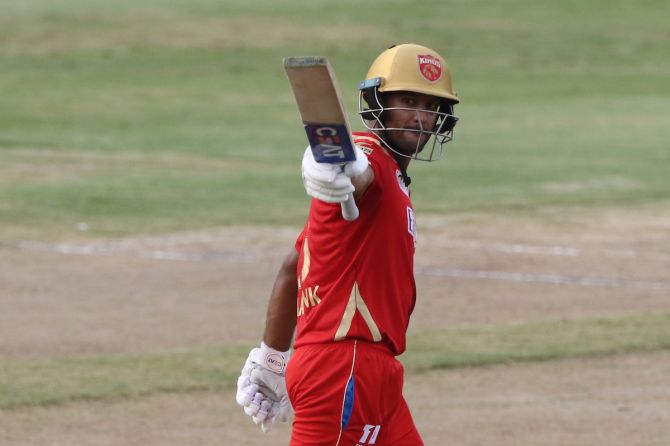 Punjab Kings, with 10 points from 13 games, and a net run-rate of -0.241 and having played one match more than Rajasthan Royals (10 points), Mumbai Indians (10 points) and Kolkata Knight Riders (10 points before Sunday’s evening game against Sunrisers Hyderabad) are all but out of the reckoning. 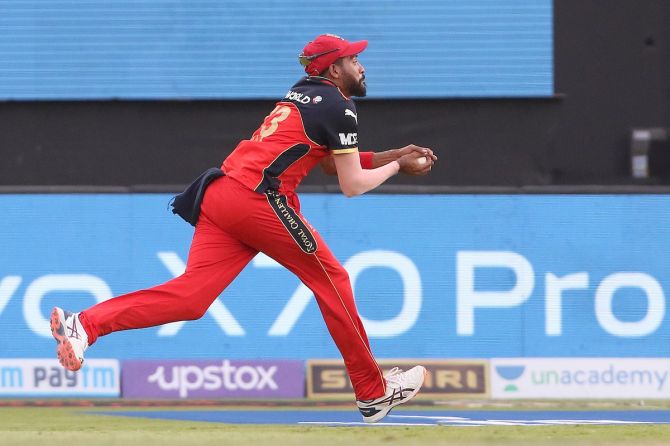 Punjab Kings lost another close match, unable to finish it off at the crunch. Skipper Rahul needs to take the blame for the defeat as his 39 off 35 balls did more damage than help to his team’s cause.

Match after match, he has taken the game deep, but frittered away the advantage after which the below-par middle-order failed to deliver. 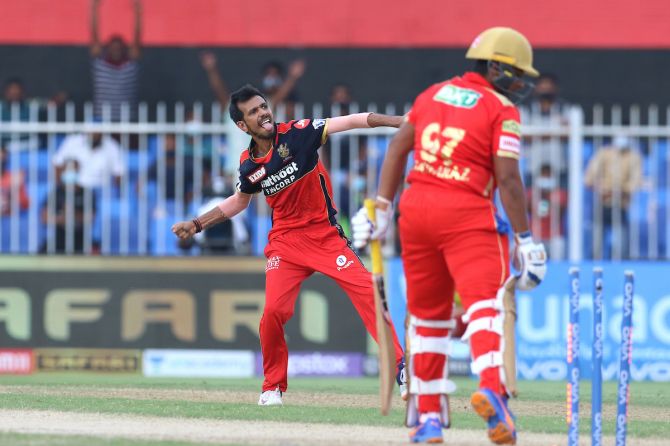 Punjab Kings were 91 for no loss in the 11th over before Rahul's indiscreet shot-selection, trying to hit left-arm spinner Sahbaz Ahmed against the turn, changed the course of the match.

Mayank Agarwal (57 off 42 balls), his opening partner, was more attacking,  but deceived by Chahal's clever variation of pace and top-edged a sweep shot.

Nicholas Pooran, who has aggregated less than 100 runs from 11 games, played another rash sweep shot off a tossed up Chahal delivery before a distinctly overweight Sarfaraz Khan was fooled by a conventional leg-break.

Punjab Kings needed 27 runs from the last two overs and Mohammed Siraj (0/33 in 4 overs) bowled an impressive penultimate over to bring down the equation to 19 runs off the final over.

Shahrukh Khan was run-out off the first ball of the 20th over by Harshal Patel (0/27 in 4 overs) and Moises Henriques smashed a six off the second and took a single, but it was too little, too late to deny RCB the two points from the match. 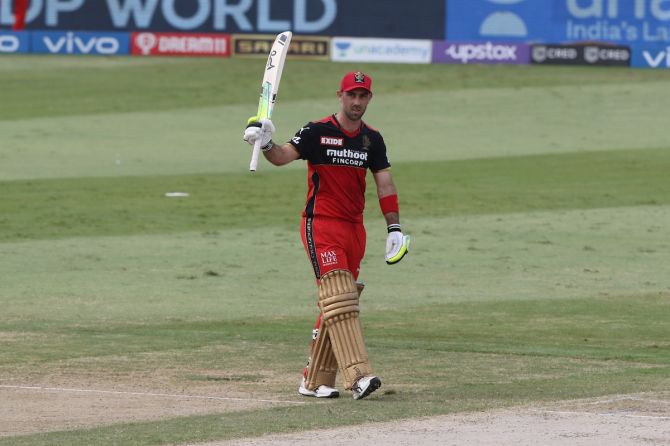 Opting to bat first, the Royal Challengers were off to a flying start, as skipper Virat Kohli and Devdutt Padikkal scored 55 runs in the first six overs.

The Australian all-rounder took back-to-back wickets, ejecting Kohli and Dan Christian before returning to dismiss Padikkal in the 12th over. 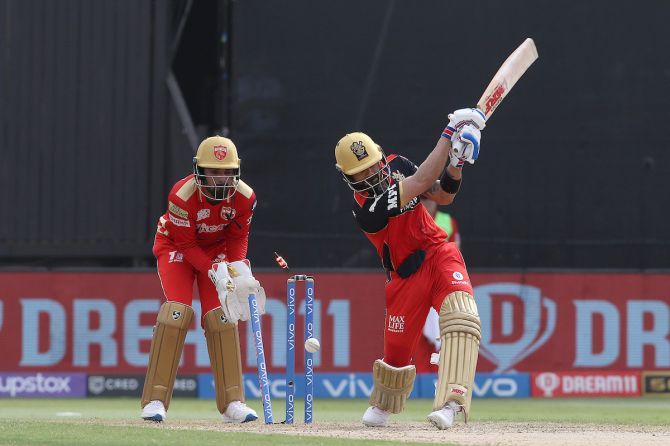 Maxwell, who is in the midst of one of his best IPL seasons, and AB de Villiers then set about rebuilding the RCB innings and put together a 73-run stand for the fourth wicket.

The Australian completed his 50 off 29 balls before being caught by Sarfaraz Khan off Mohammed Shami for 57 off only 33 balls.

Shahrukh Khan then ran De Villers out after the South African scored a quick 23 off 18 ball, which included a four and two sixes. 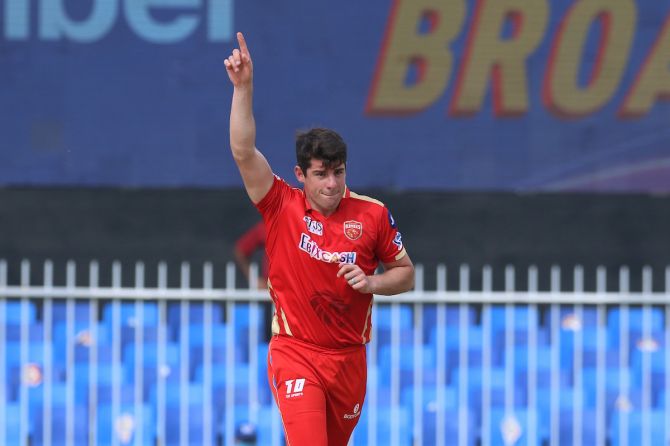 Kohli started with a four, while Padikkal hammered Arshdeep Singh (0-42 in 3 overs) for a six over deep mid-wicket and a boundary in the third over, which fetched the Royal Challengers 13 runs.

Padikkal then launched into leggie Ravi Bishnoi (0-35 in 4 overs), striking two boundaries in similar fashion over the bowler's head. 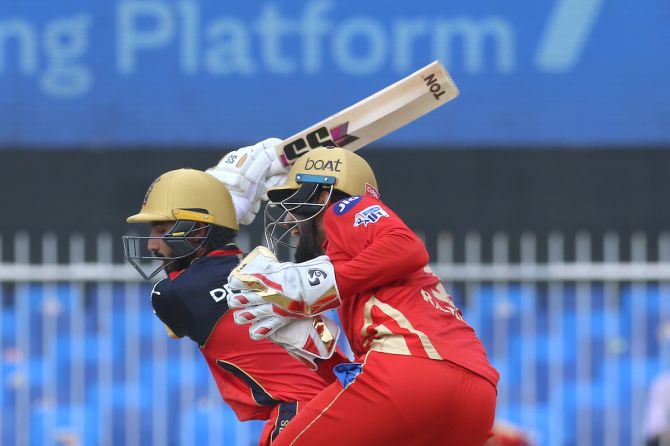 Kohli, who got a reprieve in the fifth over when Sarfaraz Khan dropped a tough chance at short-mid wicket, was then in his element.

He and Padikkal tore into the Punjab Kings attack, racing to 55 without loss by the end of the Powerplay.

In the eighth over, Padikkal was adjudged not out by the third umpire, despite a wiggle that was seen off his glove, off Bishnoi. 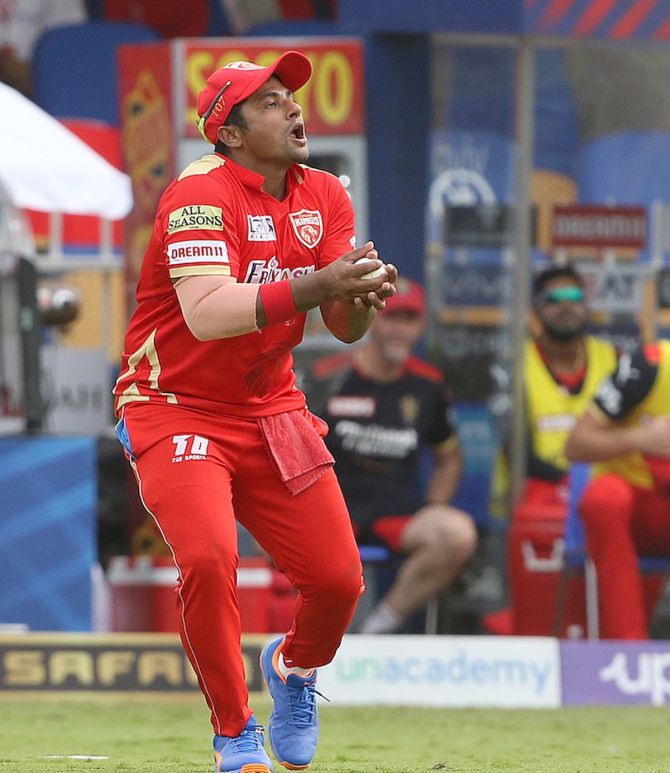 But Punjab pegged RCB back after Henriques (3 for 12 in 4 overs) picked three quick wickets.

He first cleaned up Kohli, and off the next delivery forced Dan Christian to give a regulation catch to Sarfaraz.

Henriques then dismissed Padikkal, who nicked one to Rahul, to have RCB tottering at 73-3.

Maxwell then took charge and steered the Royal Challengers to the highest total by any team at Sharjah Cricket Stadium this season.