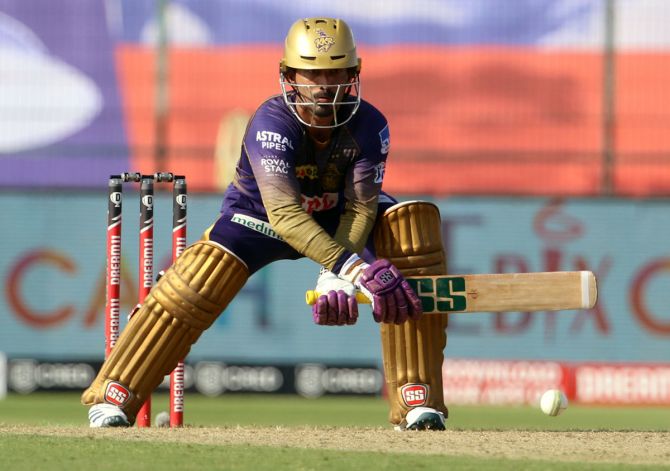 Fine knocks by Lokesh Rahul and Mayank Agarwal were vain as Kings XI Punjab went down to Kolkata Knight Riders by 2 runs in the Indian Premier League match, in Abu Dhabi, on Saturday.

Chasing 165 for victory, openers Rahul and Agarwal put on a 115-run stand before losing their way after the fall of the latter in the 15th over and Kings XI suffered their fifth straight defeat in the competition.

Kolkata bowlers Sunil Narine and Prasidh Krishna held their nerve in the death overs to pull of victory for the side.

Kings XI have just one victory from seven matches, while the Knight Riders moved to third in the points table with eight points from six matches. 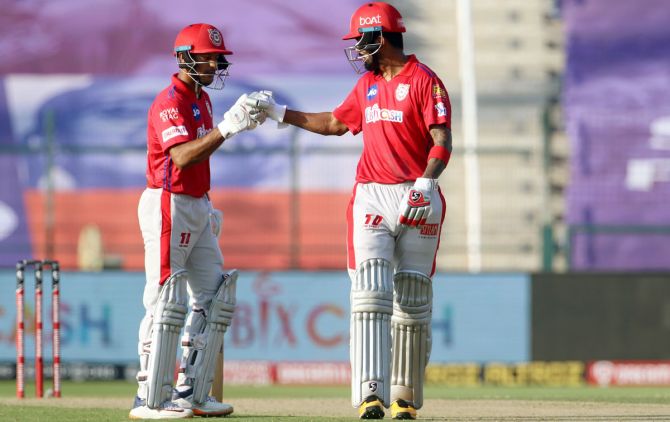 Earlier, a counter-attacking 58 off just 29 balls by skipper Dinesh Karthik and opener Shubman Gill's 57 helped Kolkata Knight Riders post 164 for 6 after they elected to bat.

Karthik's decision to bat first seemed to be backfiring as Kolkata were struggling at 63 for 3 in the 11th over, but he changed the complexion of the innings with a magnificent knock that included eight fours and two sixes.

The Knight Riders captain, who was run-out off the last ball of the innings, produced some exquisite shots, his placements were brilliant, and running between the wicket top-class. His fifty came off just 22 balls. 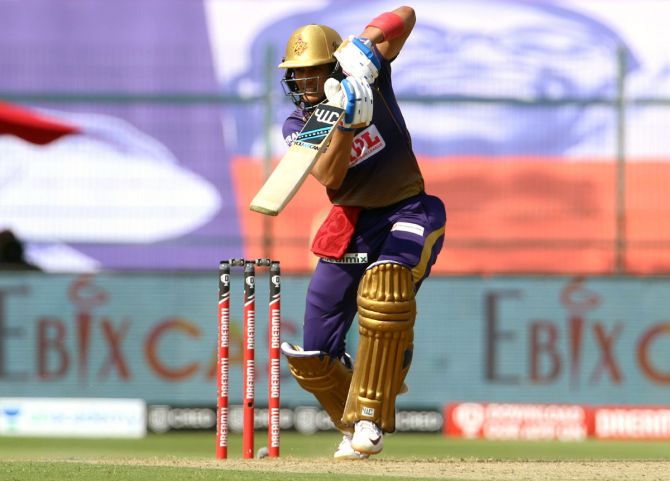 Young opener Gill contributed a 47-ball 57 which was studded with five fours.

The 82-run stand between Karthik and Gill for the fourth wicket was the cornerstone of Kolkata’s innings on a slow and difficult pitch. 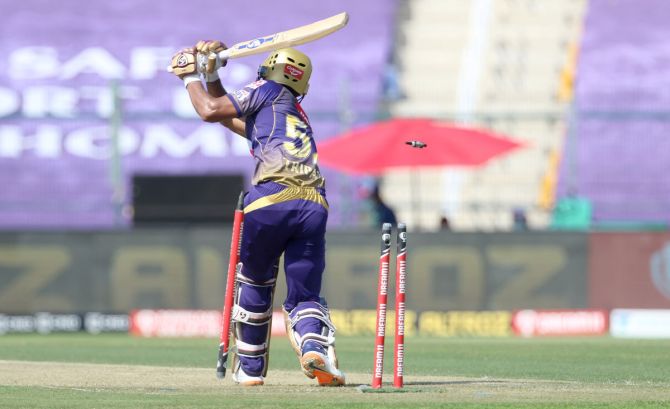 Kings XI Punjab staged a comeback in the last two overs, which yielded just 18 runs. They conceded 71 runs in the six overs prior to that.

Kolkata, however, made a disastrous start, losing two wickets for just 25 runs in the powerplay.

Rahul Tripathi's (4) middle stump was sent cartwheeling by Mohammed Shami in the third over while Gill was guilty in the run-out of Nitish Rana (2) in a horrible mix-up.

The scoring rate picked up a bit with Eoin Morgan (24), who was promoted to number four, looking for runs. 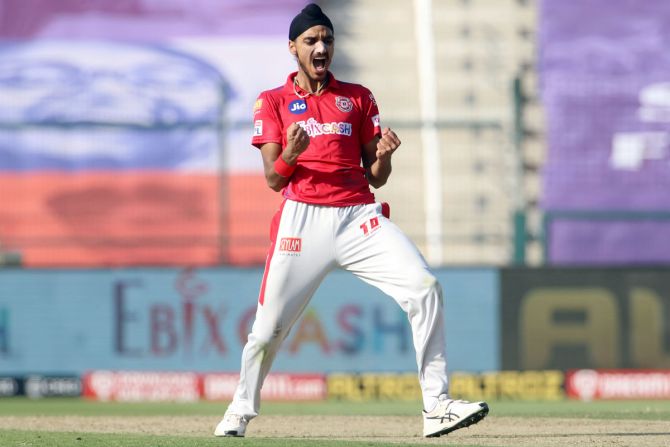 Just as the Gill-Morgan third-wicket stand was looking to grow big, leg-spinner Ravi Bishnoi removed the England limited-overs’ captain, who offered a simple catch to Glenn Maxwell at long-on.

Morgan chipped in with 24 from 23 balls in the middle overs.

Thereafter, Gill and Karthik held sway. Gill was out in the 18th over and Andre Russell (5 off3) fell cheaply, but Karthik had done enough to give the side a fighting total.

The young Arshdeep Singh impressed while picking 1-25, and bowling a maiden over, including the big wicket of Andre Russell, while Ravi Bishoi bagged 1-25. 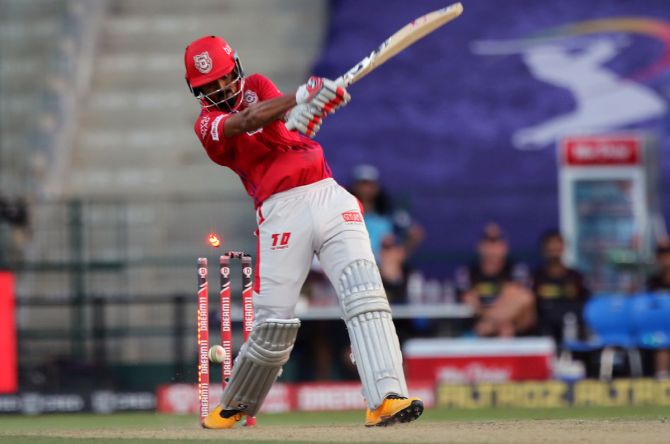 Kings XI made a mess towards the end of their run-chase. The Mohali-based outfit needed 22 from the last three overs, but the match turned on its head in the 18th over.

Nicholas Pooran (16) gifted his wicket in the over bowled by Narine, who conceded just two runs. 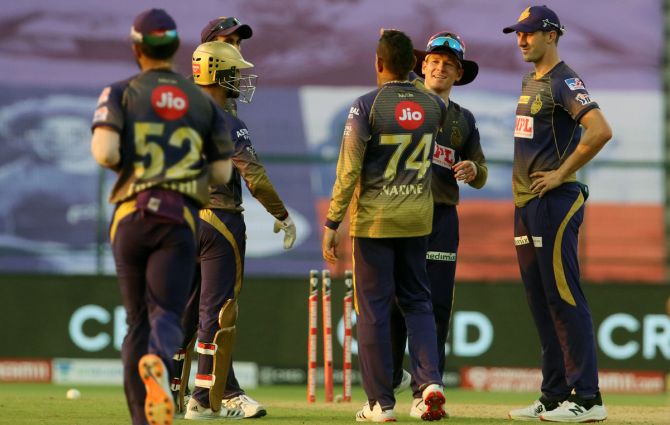 Needing 20 runs in the last two overs, they then lost two more wickets in the space of three balls, including that of Rahul, in the penultimate over bowled by pacer Prasidh Krishna.

They then needed 14 runs from the last over and six of the final delivery to take the match to Super Over but Glenn Maxwell could only score a boundary.

Earlier, Rahul and Agarwal, the top two run-getters in this IPL, avoided taking undue risk while getting the odd boundaries to keep the asking rate under control. They were 47 for no loss after powerplay, with Pat Cummins bowling three of the first six overs. 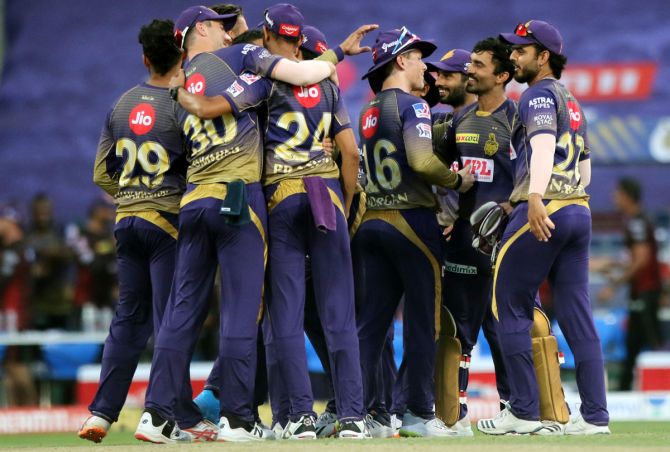 Rahul was dropped by Andre Russell off the bowling of Krishna in the second over when he was on two. Russell hurt himself while fielding after a few overs but returned in the 11th over only to leave the field again in the 13th.

Kings were 76 for no loss at the halfway mark and the duo kept getting the ones and twos without much trouble with KKR suddenly finding a death over bowler less without Russell.

But they finally got the breakthrough when Agarwal holed out to Subhman Gill in the 15th over. Then new man in Nicholas Pooran went for an unnecessary shot that led to his and Kings XI’s downfall.