Check out Kohli's advice to Team India after loss to NZ

'Fielders are going to play a crucial role, half chances will be massive. We will have to be precise in all three departments.' 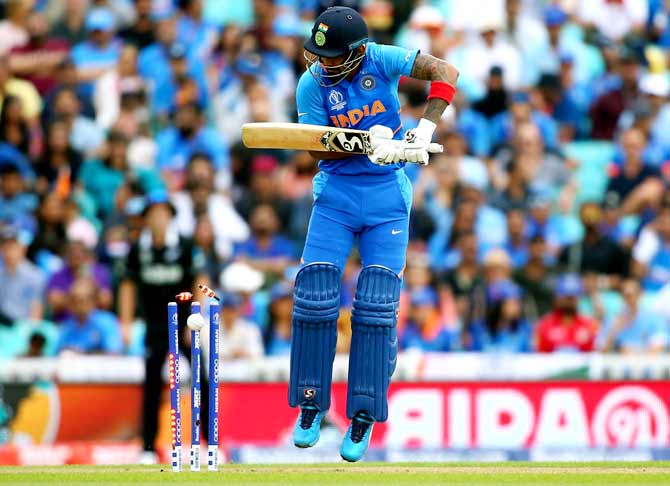 IMAGE: KL Rahul is bowled by Trent Boult during the World Cup warm-up match at The Oval in London. Photograph: Jordan Mansfield/Getty Images

India's top-order may fail to fire under overcast conditions in England and the batsmen down the order must be battle ready to bail out the team during the ICC World Cup beginning next week, said captain Virat Kohli on Saturday.

Electing to bat in the warm-up game against New Zealand, India suffered an early collapse in slightly bowling-friendly conditions at the Oval before being bowled out for 179 in 39.2 overs. Ravindra Jadeja's 54 off 50 balls and Hardik Pandya's 37-ball 30 were the only substantial scores.

Kohli admitted his side couldn't execute their plans.

"Didn't go to plan. Good challenge up front though. We can expect that in some places in England when conditions are overcast. From 50 for 4 to get to 180 was a good effort," Kohli said after New Zealand overhauled the 180-run target in 37.1 overs to hand India a six-wicket defeat in the first warm-up match of the World Cup.

"In a tournament like the World Cup, the top order can go off sometimes, so Hardik getting runs, MS (Mahendra Singh Dhoni) absorbing pressure and Jadeja's fifty, those were good positives."

Talking about India's bowling effort, Kohli said: "We bowled well -- they were going at 4, 4.5 per over -- and looking at that in isolation we did well. Fielders are going to play a crucial role, half chances will be massive. We will have to be precise in all three departments."

New Zealand skipper Kane Williamson was happy with the effort of his seamers and he plans to use the spinners more in the second warm-up match.

"With the new ball, there was a little bit of seam movement, not too much swing. We didn't get too much from the spinners but hopefully we can get them some work in the second warm-up game," he said.

"It was quicker in the first innings than the second innings, it got slower later on."

Williamson said his team is trying to be flexible in their batting unit.

"Henry (Nicholls) can bat at the top and in the middle. And with Tom's (Latham) finger being injured, we wanted to have (Colin) Munro up there to give us options. We are trying to be flexible as we know Munro can be destructive.

"Facing a quality side like India and scoring some runs is always good," he said.