BCCI salute bereaved Siraj for putting nation before self

'May Mohammed Siraj have a lot of strength to overcome this loss…lots of good wishes for his success in this trip... tremendous character.' 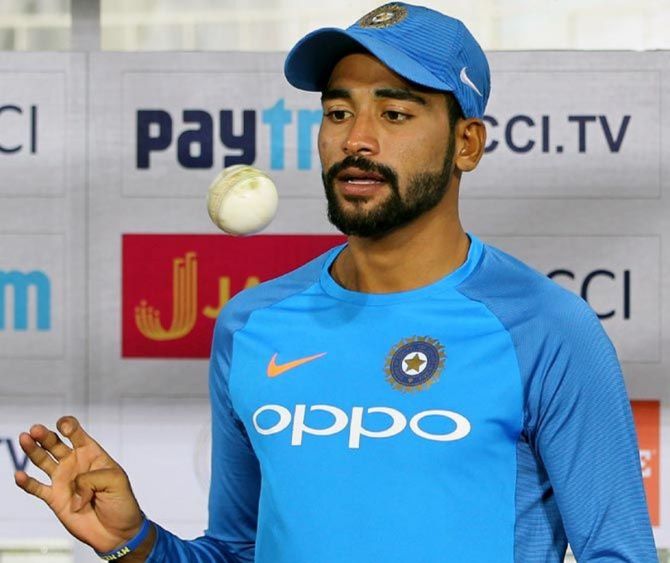 IMAGE: Mohammed Siraj was left bereaved after his father's passing due to a lung ailment on Friday. Photograph: BCCI

BCCI secretary Jay Shah on Saturday said that pacer Mohammed Siraj, who lost his father on Friday, was given the option of flying back home to be with his grieving family but he decided to stay back in Australia for "national duty".

Ghaus, who was suffering from a lung ailment, died on Friday. He was 53.

"The Board of Control for Cricket in India (BCCI) had a discussion with Siraj and he was offered the option of flying back and be with his family in this hour of grief," Shah was quoted as saying in a BCCI media release.

"The fast bowler has decided to stay with the Indian contingent and continue performing his national duties. The BCCI shares his grief and will be supportive of Siraj in this extremely challenging phase," Shah added.

Board president Sourav Ganguly took to Twitter to laud the Hyderabad pacer for his resilience and mental fortitude in this hour of tragedy.

"May Mohammed Siraj have a lot of strength to overcome this loss…lots of good wishes for his success in this trip... tremendous character," Ganguly tweeted.

Ghaus, who was an auto rickshaw driver, was the biggest influence in Siraj's life, as he encouraged him to take up cricket as a career and took care of all his needs despite limited means.

Siraj first came into limelight with 41 wickets for Hyderabad in Ranji Trophy, followed by a record Rs 2.6 crore IPL deal from Sunrisers Hyderabad as an uncapped player in 2017

He has only been picked for the four-match Test series in Australia. If Siraj had chosen to fly back to India, he would have had to do another 14-day quarantine in Australian under the local government rules on his arrival.