'The web of transactions is so complex that it requires expertise to understand the strategies involved in each fraud.'
Shrimi Choudhary reports.

IMAGE: India expects Nirav Modi, who is currently in a British prison, to be extradited soon. Illustration: Dominic Xavier/Rediff.com

Investigations into some of the country's top financial frauds are likely to conclude fairly soon, some in the next three to four months.

Over the past three months, probes by investigative and tax agencies have encompassed a vast range of corporate India, including top bankers, rating agencies, and even the Big Four accounting firms.

"These cases involve multiple entities and each of them has its own story and links. The web of transactions is so complex that it requires expertise to understand the strategies involved in each fraud," said an official of one agency who is handling some of these cases.

Nonetheless, he added, some investigations had managed a breakthrough and could reach closure in a few months with some crucial developments happening under the new Narendra Damodardas Modi government. 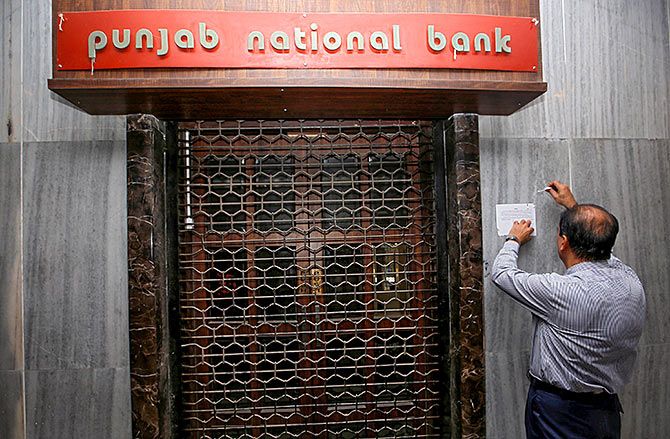 IMAGE: A man tries to remove a notice pasted on the wall of a Punjab National Bank branch after it was sealed by the CBI in Mumbai. Photograph: Francis Mascarenhas/Reuters

The investigation around the bank staff directly and indirectly connected with the case is almost over.

Both the ED and CBI have filed their prosecution complaint.

However, the main challenge in the case is to extradite the key accused in the scam: Fugitives Mehul Choksi and Nirav Modi.

Modi is currently in prison in London following a rejection of his bail application, for the third time, by a London court over his extradition to India.

"We have requested our UK counterparts to expedite Modi's extradition. Subsequently, the ED has been in talks with the Antigua agencies for deporting Choksi to India, but this is taking time due to administrative procedures," said an official familiar with the case.

"We have attached Modi and Choksi's assets of about Rs 5,000 odd crores. The details regarding this and other evidence has been submitted to the UK court," he added.

He said the British government supports the Indian agencies and that Modi's extradition is likely in a month or two.

If this happens, it will be a big achievement for the agencies, especially as another similar decision is awaited on fugitive offender Vijay Mallya. 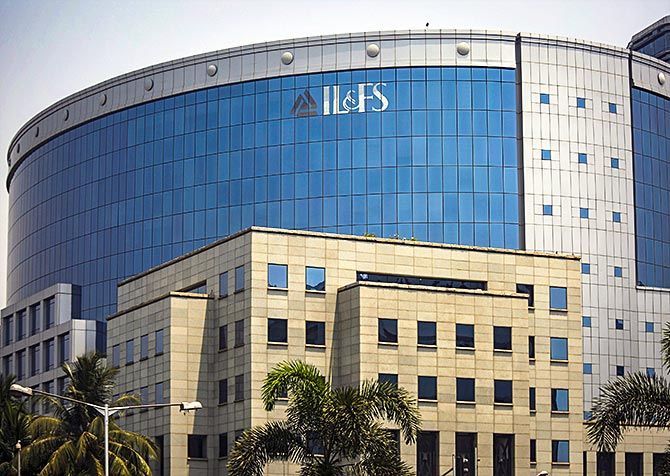 Stringent action is expected against the auditors in the IL&FS fraud, according to a government official.

So far, the SFIO has questioned a partner at BSR in Delhi, which is the Indian audit arm of KPMG, one of the Big Four consultants and one of the three auditors of IL&FS which also includes SRBC, an affiliate of Ernst & Young.

A few days ago, the SFIO also questioned top officials at Deloitte Haskins.

The ministry of corporate affairs is believed to be contemplating banning some of these auditors from auditing for five years.

The ED searched the homes of some of the key people in the scam.

The ED is in possession of some of the audit reports, including that of Grant Thornton which had flagged the siphoning off of a Rs 13,000 crore loan.

The probe has discovered that the loan amount went around to several IL&FS subsidiaries and also the bank accounts of some senior directors on the board.

Some arrests, the ED hinted, are due soon. 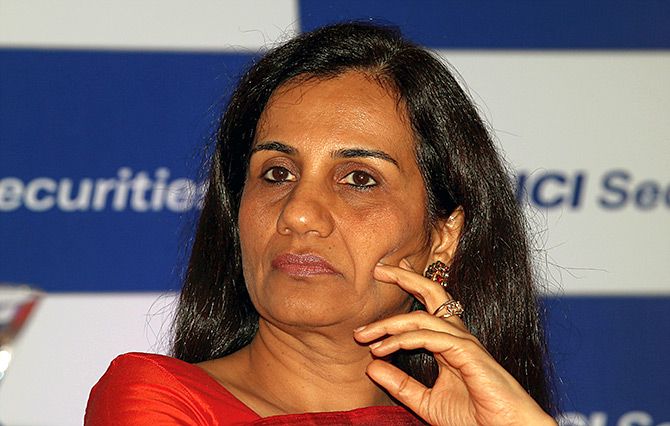 IMAGE: The case against ICICI's former CEO Chanda Kochhar, her husband and his companies, and the Videocon group is moving towards completion. Photograph: Francis Mascarenhas/Reuters

The case against ICICI's former chief Chanda Kochhar, her husband and his companies, and the Videocon group is moving towards completion.

The CBI has also named Sandeep Bakhshi, Zarin Daruwala and K V Kamath for being on committees that sanctioned the loans.

Later, the ED also filed a money laundering case against Kochhar and others named in the CBI report.

It is now probing the allegation that the Kochhars formed multiple firms to receive the kickback payments.

Kochchar and her husband have been summoned to record statements, said a source.

According to this official, their previous statements had not fully accounted for the transactions and more details were required.

One effect of this scandal was to plunge many other corporate groups and their loan accounts into question.

The ED is learnt to have called in Essar group executives for a second time and searched some Essar premises.

"We are looking at the loan accounts of at least six corporates whose loans were sanctioned by ICICI. This includes the Essar group, the Videocon group, JP Associates and Bhushan Power & Steel," said the same official. The CBI is likely to file its supplementary prosecution complaint in this bribery scandal in a few days, said a source familiar with the case.

This chargesheet will involve the role of Christian James Michel, the middleman who was extradited last December from Dubai to India.

The chargesheet is expected to be a turning point for this case as it will have the names of the beneficiaries who received kickbacks for signing the AugustaWestland deal to buy dozen of helicopters during the United Progressive Alliance regime.

The scam emerged after the ED found two diaries which allegedly mentioned the initials 'RG'.

Another related but separate case is against corporate lobbyist Deepak Talwar for receiving kickbacks for securing the air traffic rights for foreign airlines in 2009.

"The matter is under way, we will soon summon the senior bureaucrats who favoured the move," said an ED official.

Meanwhile, the ED is moving against Sanjay Bhandari, an alleged associate of Robert Vadra, the husband of Congress Party General Secretary Priyanka Gandhi.

Bhandari is accused of entering into a contract to receive kickbacks for oil deals. 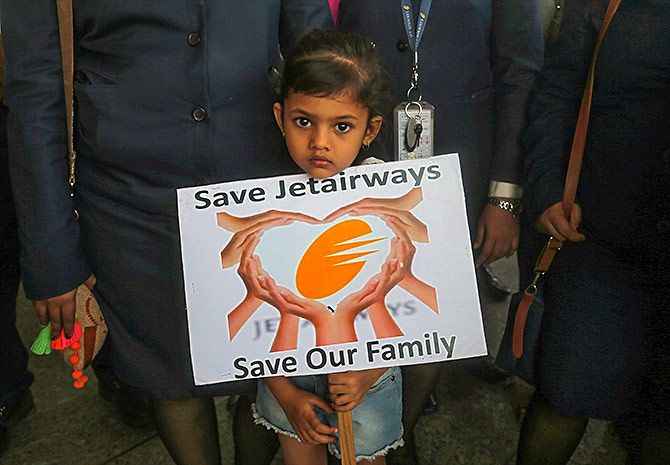 Then there is Jet Airways.

It is believed that the ministry of corporate affairs has found some transactions in its account books which it deems worthy of investigation.

Early this year, the registrar of companies in Mumbai initiated inspection of Jet's books, almost eight months after the ministry directed it to look into allegations that the now grounded airline siphoned off money.

Last year too, the airline's offices were searched by the income tax department over its transactions with Dubai-based entities.

The SFIO also issued a look out circular against Jet founder Naresh Goyal and his wife which prevented them from boarding a flight to leave the country on May 25.